Hi everyone. Let me introduce myself a bit first. I’m Chie and I’m the illustrator of The Story of Lee, forthcoming book about a meeting of a girl and a boy in lost in translation culture mixture.

I just wanted to say hi to you all and wishing a great holiday season and a new year, so I picked up today to post my first entry here.

Also, I’d like to show some pictures of an exhibition in London, which just finished. The Story of Lee was hugely included in this exhibition, That’s Novel! was on for a month at London Print Studio.

The exhibition was successful and the opening night was packed.

The image from the cover of the book and illustrated explanation of how I built up pages from the script by Sean Michael Wilson was printed in huge size and displayed like this. 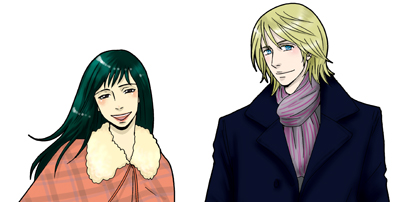 Then the people at the studio made them into this!

This image was displayed the window of the gallery with the other artists’ characters.

At the PV, some people came up to me and told that they love what I exhibited. I hope they love book.. well I’m quite sure they’ll do!

P.S. I’m sorry in advance if my English is shaky! It’s not my mother tongue so please forgive me! Hope you understand me ok…