Marc Mason at Comics Waiting Room on 2 of our recent books: first on Sacco & Vanzetti:

“As with all the books he’s done in this series, he does his research, lays out the facts and evidence, and allows you to decide for yourself. That’s not only a hallmark of strong storytelling, but of confidence by the storyteller. He doesn’t need to pull you around by the nose if he has done his job right, and no one does the job right like Rick Geary. This is another incredible effort by a creator who simply seems to never swing and miss.”

And on Little Nothings 4:

“On the heels of Geary, LITTLE NOTHINGS VOL.4 arrived, and that’s about as happy as I get when it comes to comics. LITTLE NOTHINGS shows us a phenomenal talent at the peak of his powers. What more could you want?”

Over at Blogcritics, Bill Sherman is the first to review our freshly delivered Kinky & Cosy: 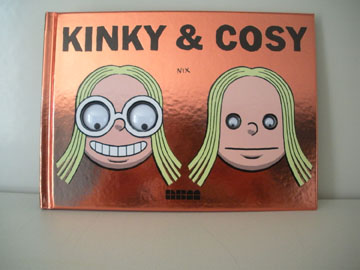 “The shiny die-cut cover to Kinky & Cosy (NBM) provides a strong indication of where this collection of comic strips is coming from:  featuring google-eyed headshots of the book’s eight-year-old title twins, the collection opens to the image of two grinning death’s head skulls. A series of gag comics by Belgian cartoonist Nix, the strip is being compared by its publisher to the “Katzenjammer Kids on speed,” which is fair enough, particularly in a strip which ends on the image of our trickster girls rolling on the ground. I also detect elements of the manga/anime series Shin Chan, particularly in the strip’s (mis)treatment of our heroines’ parents.”

An unlikely source for a review of The Jade Door in our Eurotica collection: Unshelved which is a daily comics blog also with reviews for… Librarians. Hey, who said Librarians aren’t cool?

“Why I finished it: The gorgeous art. Chaiko’s softly colored maid-and-master story opens and closes the anthology, wrapping the collection up nicely. The rest of the tales are more vibrantly hued, making the folktales seem more realistic than the comparably modern story of the girl reading them.”