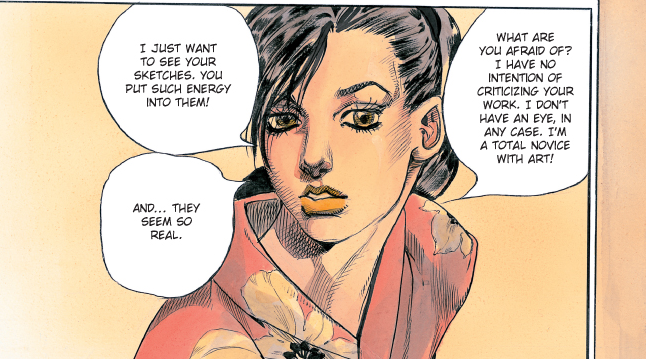 If you haven’t checked out Rohan at the Louvre yet, what are you waiting for?  The book is continuing to get some fantastic reviews…

“Rohan at the Louvre has all the elements of my type of story: fairy tale whimsy, attention to the artistic process, and an ending bathed in horror. The art is often times beautiful, yet other times absolutely chilling. And seen through the eyes of Rohan, who is cursed with the power to dissect those around him with a simple gaze, Rohan at the Louvre communicates how an artist views the world in a manner that I’ve never seen. Even those who are not fond of manga will be pleasantly surprised at this fantastic hardcover book. If you like art, horror, and fairy tale, Rohan at the Louvre is a must read.”

“The previous, fourth title in the Louvre’s distinguished graphic novel series, The Sky Over the Louvre, set an even higher standard than the first three high-quality titles, and Araki’s gorgeous ghost story easily matches them all for plot, drawing chops, and emotional gut-punch. This excellent volume is recommended for dans of extrame manga artishness and for horror otaku.”

“Rohan at the Louvre is a fun book, and it’s one that grows on you with time. I enjoyed it when I first read it, but a day later I found myself thinking about it and how effective some of the scenes in the book were…This is a dark, creepy book.”

“Araki’s depictions of the ghostly attacks beneath the Louvre are darkly grotesque and effective, a strong counterpoint to the brightly hued images of the above-ground museum…Araki’s art contains a strong Western comics influence—his figures reminded me of ’70s Marvel more than once—and contains none of the visual short-cuts that can prove alienating to those readers less in sync with manga conventions.”

So, what are you waiting for?

You can order it directly from us HERE or from your favorite comic store, book store or e-retailer.