In May 2009 Kees Korenhof of Publishing House Meinema asked me to make a comic book about philosophy, and I had boldly agreed to have it finished in time for the Spring 2010, which meant a deadline in October. I had to sit down and produce.

I started out by drawing two introductory chapters to define the area. What Is Thinking? And what makes Thinking in humans so special, compared with the consciousness process in (other) animals? Along the way, I introduced myself, or rather my cartoon character, my husband Yiri and our two cats.

But then it was time to dive into solid philosophical history. Where to begin? Well, fortunately it was very obvious: Western philosophy starts with that illustrious trio Socrates, Plato and Aristotle.

If you would offer me a chance to meet one of these three, I would definitely pick Socrates. He lived in very turbulent times, went to war on several occasions, and was not afraid to speak his mind, even against the leaders of his own city-state. They didn’t thank him for that: he was sentenced for spoiling the younger generation and disregarding the gods, and was offered a choice: banishment or death by poison. It certainly speaks for his character that he chose the latter: he was not a man to be dismissed.

That was all in the fifth and fourth centuries B.C., in a land far away… which philosopher is next? The Roman Empire sure had some great thinkers, but not great enough to equal the influence of the Ancient Greek in the development of Western thought. Actually, we had to wait about 800 years before the next candidate emerged: Augustine.

By that time, Christianity was gaining power rapidly in Western Europe and Augustine was an enthusiastic convert – after he led a life of liberal licentiousness, which makes him one of the more interesting Christian philosophers, I think. He was smitten by the works of Plato.

After Augustine, Western philosophy had to wait another 800 years for an influential spokesman (Eastern philosophy, in the meantime, was benefitting big time from the young and fresh religion of Islam, which made the Arabic lands prosper and blossom in culture and science, compared to which the Westerners were mere boorish peasants). This spokesman was Thomas Aquinas, and he loved his Aristotle. Especially the idea of the Power of Human Reason, which elevated Man from a mere victim of Fate (and Faith) to a God-chosen Pinnacle of Creation.

And that’s how we emerged from the Dark Ages, philosophically: with the idea that Man surely had to be something special, being created with such awesome faculties of Understanding and Reasoning. What philosopher could top that?

I found it challenging to pinpoint the next pivotal philosophers and eventually stayed close to home, which in my case is The Netherlands, and the following three all had a strong connection with this country: 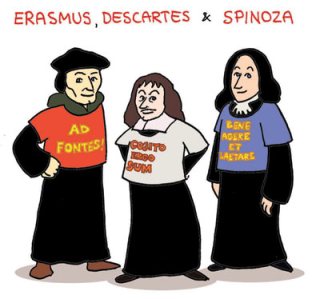 Desiderius Erasmus, René Descartes and Benedictus de Spinoza. Two of them born in the “low countries”, one of them lived here most of his adult life. They also had a strong connection with their Aristotelian heritage: all their philosophies were about Human Reason and what it can and cannot do.

Of these three I like Spinoza best. He was born in Amsterdam, the city where I live, and although history puts us 400 years apart, the times he lived in are not that radically different from now. In his day, Amsterdam was harboring, as it does now, many different nationalities and religions. It was a center of tolerance and culture. But with the country in a war and an economic recession, this tolerance eroded. Spinoza called for freedom of speech, a pamphlet he had to ironically publish anonymously.

It’s not all that different from current times. We’re in an economic recession again, minorities are being scape-goated and freedom of speech is being squelched by politicians who want it just for themselves. If Spinoza were alive today, his message would be the same. And he would probably be under fire for it, like Socrates was in his times.

Yes, the occupation of philosopher is not for the faint-hearted! You thought philosophers were dusty old men, smoking pipes and staring meaningfully out of the window of their aristocratic study-rooms, pondering ideas that have nothing to do with real life…? Think again!

You want some excitement in your life? Want to express your individuality and live life to the max? Forget bungee-jumping, become a philosopher!

There are more philosophers in the book, of course, we’ve just reached the somewhat modern age. But I’ll talk about them later, because I took a whole different turn there…