‘Philosophy: a Discovery in Comics’ is actually the first of three books I’ve made in the past three years. The second was on Religion, and the third one is on Science. This third one is now in the last stages of being finished and will come out in Dutch around the same time the Philosophy-book will be published in the US. Right now, I’m wrapping things up and starting to think about the upcoming promotion.

This is the cover of the Dutch ‘Wetenschappen in Beeld’: 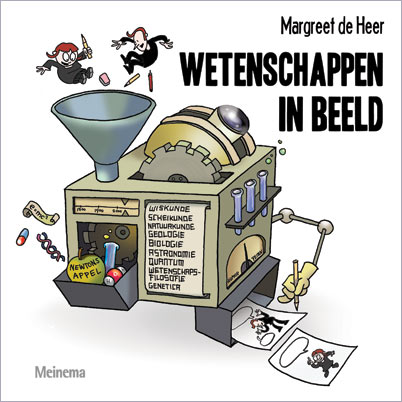 With a bit of luck, it will also be available in the US in the future, as ‘Science: a Discovery in Comics’.

My brother Maarten (him with the big nose from my last blog entry) found it very inspiring and unleashed his amazing powers of animation on it – he made it into a moving, chugging, huffing & puffing machine that you can activate yourself: just click on this sentence and it will take you to his site where the animation is.