Since I started this blog, I’m paying more attention to other bloggers and the choices they make. There are promotional blogs, ranting blogs, look-at-our-kids-blogs, look-at-our-cats-blogs. Blogs with endearing content in gruesome, flashy designs, with or without soundtracks. Blogs with superficial content in very slick layouts. And ever since Blogging became all the rage, there is an increasing amount of stranded blogs.

Blogs have lifespans. A blog like this, essentially started to help sell my book, will probably peter out in about a year. Blogs by doting parents on their firstborn usually don’t survive the birth of the second child. Blogging artists get burned out or lose interest after their addiction to “the stats” fades away.

There’s one blogging author that I’ve followed for a while with great interest now: Neil Gaiman.

He was one of the first to start, in 2001, and has been going steadily ever since. What’s his trick, I wondered, how does he do it? Well, I guess he is first of all a writer who loves to write – be it novels, comics or blog entries. And second of all, there seems to be a transparency and innocence to his writings – he genuinely likes sharing stuff from his life, about his kids, his dogs, his bees, and in recent years about his wife Amanda Palmer, who is equally accessible in all kinds of online accounts of her exciting life as a performer/artist/musician.

Fearlessness, is a word that comes to mind.

In an age where warnings about putting personal information on the internet are part of children’s education (& rightly so), some people don’t hesitate to share their intimate thoughts, feelings and experiences with the whole wide world. These are probably the same people who greet strangers in the street. Who exchange pleasantries when you wait with them in line. Who will return your wallet when they find it. Social people.

It touches me and gives me hope for mankind.

(Could I be such a person…? Oh no, I’m way to anti-social – I prefer to hide away in my secret sanctuary, working on secret projects; and then, once in a while, I’ll jump out shouting TA-DAAH! and show the world what I’ve made – before I slink off into the shadows again…)

(It’s a good thing I married someone who is the same way – and now I’ve made a perfect link to the second part of this blog-entry, which contains Thoughts about Marriage:)

Yesterday, Neil Gaiman wrote on his blog about how he reads to his wife, and how she often falls asleep when he does.

It seems like a harmless enough thing to mention – yet it struck me with the raw intimacy of such a moment. The image somehow reveals the heart of their marriage: the interest in each other’s work (he is reading her his newest book), the feeling of ease and familiarity (falling asleep to the sound of husband’s voice) and the atmosphere of trust and understanding (evidently the fact that she falls asleep while listening to his work does not invoke a row – “Well thank you for this blunt reaction to my work – if it bores you that much why don’t you just say so!”).

The essence of a marriage captured in one image.

I have such an image for my marriage with Yiri, too. It’s this: 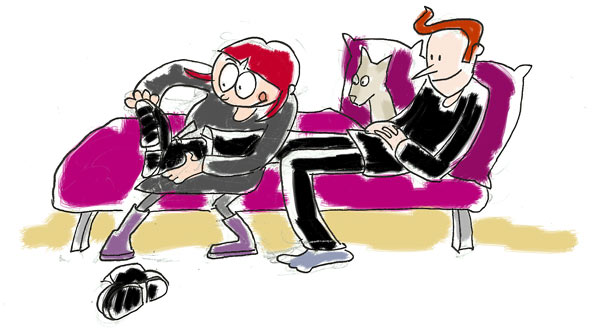 Yiri wears clunky, unyielding army boots which he laces up real tight – they give him the necessary support, we walk a lot. Getting them on takes a while, but taking them off, with feet swollen, and often exhausted from whatever adventure we had Outside, can be a regular Ordeal. So I take them off for him. We sit on the bed, his leg on my lap, and I unlace his shoes while we chat a bit.

Of course he could do it himself. Of course I have better things to do (I’m always involved in some all-important project, or so I think). But I go out of my way to make life a little easier for him. To add just that little bit of luxury of being “waited on”. To have a very basic, physical interaction – which to me, to us, has become very intimate.

That is the essence of our marriage for me – at least, my half of it.

(Yiri’s half involves handing me lots of cups of tea and chocolate. Oh, and coloring my books for me, although he says he does not do that for Love but for the World, which he thinks will be a better place with my work in it. See why I love him?)

Note that I don’t say: Essence of Marriage, but of OUR Marriage – I think the meaning of a marriage is different for everyone. People sometimes seem to think that Marriage is a kind of concept you have to conform to when you tie the knot. My (our) experience is that marriage takes shape over the years – exactly because of little interactions like the one above, which we consciously cultivate.

So, what I’m trying to say is: Blogging, like Marriage, is a very personal thing and takes shape only according to the rules that we ourselves set by them.

And since my blog started as a promotional tool, I’ll end with the admonition to Go Buy My Book! this September. Philosophy – a Discovery in Comics – it’s funny and thought-provoking and a Labor of Love, conceived, gestated and colored all within the holy bonds of matrimony.