Everyone is on vacation. Officially, I have been “free” for a few weeks now. That’s what the word “vacation” literally means, by the way: “to be free”, from the Latin word vacare – also the root of vacuum, which is a space devoid of anything. But I don’t feel very free at all, especially not on the inside. To continue the metaphor of vacationing as “emptying” – I feel like I’m trying to dig a hole in the ocean. Yes, a lot of Work is tossed out of the daily routine, but immediately Daily Stuff has flowed in and replaced it with small worries, aches & pains. Nope, I’m not in vacation-mode at all yet. 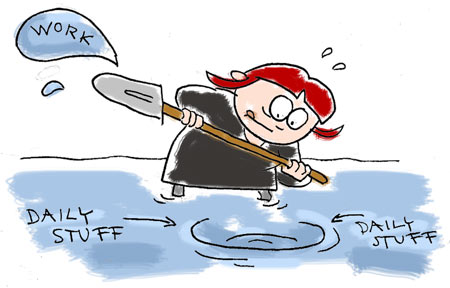 My inner unrest is made worse by the general imperative, shouted at me from commercials, billboards and through the social media, that THIS IS THE TIME TO RELAX! HURRY UP! SUMMER’S HERE! ENJOY YOURSELF! NO STRESS! OR ELSE!!

I must forget about getting a vacation. I’m not going to be “free” from my own thoughts & routines. A better approach is to consider this period the Holidays – and I really mean Holy Days. (called that because in the Olden Days people only got days off that were religion-related).

What did people do on holy days? It was not a matter of being free, but of doing something ELSE than the daily routine. To find an occupation that is a bit more edifying than just work. Something that lifts you up and gives you a new perspective.

When you look at it this way, everything can be Holy. As long as it gets you away from the ordinary.

This Summer, I’m not going to be Vacationing – I’ll be Substitioning.

One thought on “Small Summer Philosophies #4”