As the graphic novel form took off in the 1990s, one of the first places it landed was public libraries. The respectability of MAUS as well as the initial buzz generated by the publicity generated by DARK KNIGHT & WATCHMEN raised the visibility of the comics medium. Lots of people in the library were more curious than biased against comics, so they started small graphic novel collections, steeled themselves, & waited for the complaints.

Complaints did occasionally come their way, but mostly librarians saw that they’d stumbled onto something. Patrons, particularly boys, loved comics. These books were read, borrowed, & stolen. The word was out—libraries were not dead places, they were even a bit hip.
Even better, books were coming out like UNDERSTANDING COMICS, STRANGERS IN PARADISE, & ELFQUEST, more in line with library collection policies. As librarians learned how to best collect comics they had to read them, making them become fans or at least educated skeptics.

There were barriers aside from content that made collecting graphic novels difficult. Vendors who sold to libraries didn’t carry them, &, for the most part, they weren’t reviewed (librarians generally bought books after they were reviewed) so librarians began holding conferences about graphic novels in an effort to educate each other & work out problems collecting comics. Throughout the 90s these issues were thoroughly examined, but the real breakthrough occurred when publishers saw the benefits of libraries collecting graphic novels. Initially, the big publishers saw libraries as competition, that one library sale negated multiple individual sales. However, over time the publishers saw public library collections as a way to promote the changing comics field, & a partnership was formed between the comics industry public libraries. Interestingly enough, throughout most of the 1990s, the two most popular graphic novels in public libraries were MAUS & UNDERSTANDING COMICS.

For more information about the history of the graphic novel, read my book, Faster than a Speeding Bullet: the Rise of the Graphic Novel, available now. 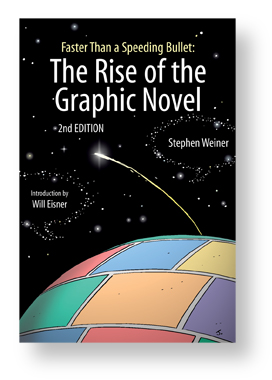