In February, I blogged about the project ‘A Calendar of Tales‘ that writer Neil Gaiman had started in cooperation with the whole wide world – he wrote 12 short stories prompted by tweets on Twitter, and invited everyone to illustrate them.

I spent an enjoyable fortnight making one illustration a day, one for each tale. It was very inspiring and energizing, and made me think outside my own box. The result was 12 drawings that I have posted on my website, together with the stories by Neil and art by others that I liked.

The project was not a contest per se, more an invitation to create. Even so, I was incredibly gratified to have four of my illustrations shortlisted, and one of them even made it as a “runner-up”! It is featured on the official A Calendar Of Tales website, which launched last week and is a beautiful scrolling experience, so check it out.

Accompanying the month of July, you’ll find my drawing: 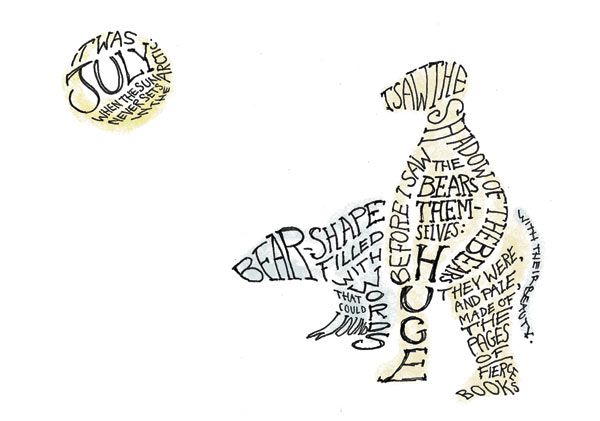 Philosophical question: since it is all made of words, can it still be called a drawing…? Food for thought.