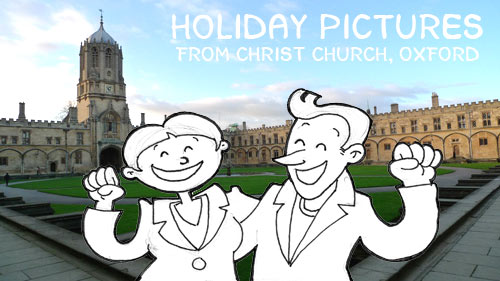 My husband and I have returned from a wonderful two weeks in Oxford, England. We took part in the Oxford Experience, a summer school program based in Christ Church, one of Oxford’s most famous colleges.

The buildings are probably best known for the movies that were (partly) shot here, such as Brideshead Revisited, The Golden Compass and the first three Harry Potter movies. Especially the awesome sixteenth century staircase leading up to Hall is a great location, and I tried to catch some of its lines and dimensions in a drawing, which took me three sessions to complete! That’s probably the longest I’ve ever taken over a single drawing – and I even left out quite a lot of detail.

I don’t often make drawings like this, I’m more used to my cartoony style. But the Christ Church architecture just really caught me – and it’s a great excuse to sit in one place for an hour or so and take it all in. This is a view in Christ Church Cathedral, where I attended a great trumpet concert:

All throughout Christ Church there are bowler-hatted men and women to herd the tourists into their specified routes. They are ever friendly and impeccably dressed:

The first week, we attended a course about Lewis Carroll’s Alice in Wonderland, which was written here. Our tutor was expert Edward Wakeling, collector, consultant, researcher, and writer on all things Carroll – not only a very knowledgeable man, but also immensely entertaining, full of riddles and jokes. I drew him as the Mad Hatter, with lots of references to the book and its writer:

The class consisted of a very international crowd – people from Australia, USA, Japan and Canada. After five days of total Alice-immersion, we were all inhabitants of Wonderland:

In the second week, we took part in the course ‘Human Memory and the Brain’, by neuroscientist prof. Gillie McNeill, who was as wise as she was enthusiastic. For another five days, we learned all about brain structure, history of brain studies, different types of memory and things you can do to keep your mind healthy (taking a course in the Oxford Experience was one of them). I made a whole bunch of cartoons during this class, which I will put up later – here’s a little preview:

At the end of our studies, we enjoyed a great formal Farewell – starting with drinks in the Cathedral Garden and ending with an amazing dinner in Hall, during which we received our certificates and heard some speeches about the Oxford Experiences and former Christ Church students (the college boasts twelve British prime ministers!). This is what we looked like in our snazzy outfits, against the centuries-old background:

Now it’s back to “normal” life, and anticipating the publication date of Science: a Discovery in Comics, which is not far off anymore…!