We are printing the TREASURY OF XXth CENTURY MURDER classic: THE LIVES OF SACCO AND VANZETTI in trade paperback format, presenting the uneasy case of the two supposed anarchists now in a more affordable format. When the hardcover edition premiered in 2011, it was on various Best Graphic Novel lists for the year. 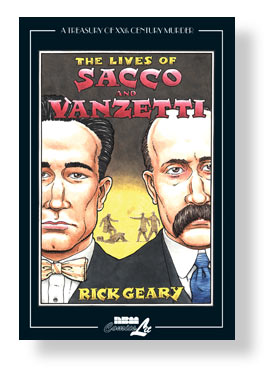 Rick Geary tackles the most controversial case of the 20th century. Anarchists Sacco & Vanzetti were accused of robbery and murder but so many supposedly damning pieces of evidence were questionable their guilty verdict elicited massive protests around the world. Geary presents us with all the twists and turns, appeals and dubious evidence after presenting us the human face of the two men, demonized by many, turned to martyrs by many others, in his usual unflappable way.
“Top ten of 2011” –Onion’s AV Club
“One of The 13 Can’t Miss Graphic Novels of 2011.
Chalk one more up for the history books and another great contribution to the country’s wealth of graphic lit.” –Kirkus Reviews
“As with all the books he’s done in this series, he does his research, lays out the facts and evidence, and allows you to decide for yourself. That’s not only a hallmark of strong storytelling, but of confidence by the storyteller. He doesn’t need to pull you around by the nose if he has done his job right, and no one does
the job right like Rick Geary. This is another incredible effort by a creator who simply seems to never swing and miss.”-Comics Waiting Room
6 x 9, 80pp., B&W trade pb., $9.99;
ISBN 9781561639366

Other recent Geary Murder stories include these two thrillers. You won’t find them yet in the collected COMPENDIUM editions.

Stanford White is one of New York’s most famous architects having designed many mansions and the first Madison Square Garden. His influence on New York’s look at the turn of the century was pervasive. As he became popular and in demand, he also became quite self-indulgent. He had a taste for budding young showgirls on Broadway, even setting up a private apartment to entertain them in, including a room with… a red velvet swing. When he meets Evelyn Nesbit, an exquisite young nymph, cover girl, showgirl, inspiration for Charles Dana Gibson’s “The Eternal Question” and for the later movie “The Girl in the Red Velvet Swing,” he knows he’s on to something special. However, Evelyn eventually marries a young Pittsburgh decadent heir with a dark side who develops a deep hatred for White and what he may or may not have done to her, setting up the most scandalous murder of the time.

“Geary’s art is amazing in setting the stage in a booming New York City at the beginning of the 20th century. A thought-provoking, wonderfully delineated read.” –Comics Worth Reading 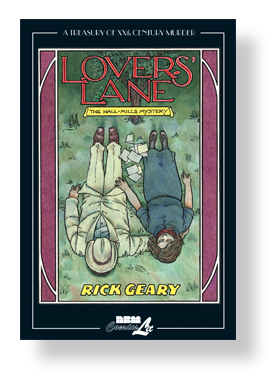 TREASURY OF XXTH CENTURY MURDER
LOVERS’ LANE
The Hall-Mills Mystery
Rick Geary
New Brunswick, New Jersey, Thursday, September 14, 1922. Reverend Hall and Mrs. Eleanor Mills take a stroll in the town’s park in the evening. Shots are heard. 2 days later, their bodies are found laying on the ground very neatly next to each other with her hand on his thigh, love letters strewn around them, the scarf on her neck covering up the deep bloody slit in it. Reverend Hall, himself married, was in an open secret of an affair with Mrs. Mills, a married woman of his choir. The perfect ingredients for a juicy scandal and fascinating investigation which the nation’s press hungrily devours. Alas, no clues or evidence are sufficient to make an indictment stick. Was it suicide? A jealous rival? The case reopens again 4 years later as new information is brought to light, indicting the reverend’s wife but she is an upstanding member of her community, denying to the last that her husband had any affair…

“As usual, he proves to be an adept and thoroughly engrossing storyteller and Lovers’ Lane is another excellent entry in this rather admittedly macabre series.”
-Chris Mautner, Robot 6, Comic Book Resources

Be sure to order your copy today from your favorite comic book store in March’s Diamond Previews Magazine.