This graphic novel about Sartre’s life is being published in the US by NBM, in a pessimistic era and in a global political context that, in short, can be described as worrying and freedom-destroying. “The story of a life is the story of a failure”. Sartre was amused by his own irony in writing that we are constantly running after that which makes us incoherent, dissatisfied, incomplete beings: desire.

However Sartre and his existentialism were not pessimistic. It was important to me to show his full personality in this graphic novel. His entire life was crossed by desires; as incoherent and misunderstood as they might be by his contemporaries as well as the reader of today. These days I appreciate more his partner Simone de Beauvoir and her work as a feminist, but at that time I wanted to continue to develop my thoughts and writings on him.

In 2011 at 23 years old, I graduated in Contemporary Philosophy at the École Normale Supérieure in Paris, the school where Sartre also studied. This field of study “Contemporary Philosophy” inncludes philosophy which followed the great revolutions in thinking by Nietzsche, Marx and Freud, to today. My thesis I defended was on Sartre’s attraction to psychoanalysis. This attraction is a story of love and hate; as a thinker of his time, Sartre wanted to go deeper into the Freud-Marxist legacy. He was extremely interested in one of the most important revolutions in the XIXth century. He was excited and afraid of the idea that the human psyche comes with a dark zone called “the unconscious”, and we finally acquired the tools to explore it, like a new language or a forgotten Atlantis.

Sartre was deeply attracted by this perspective, only it was impossible for him to admit that this unconscious is ruling us, deciding things for us, driving us with dreams and Freudian slips. I wanted to look at the reason why. Sartre actually strongly believed that human beings are ALWAYS free and that they only decide for themselves, alone. This counteraction between the two concepts of unconscious and freedom haunted him his whole life. He never underwent psychoanalysis himself but instead wrote several books about artists and writers to vicariously experience the analysis process. These writings he poetically called “existential psychoanalysis”. He published texts and essays about Baudelaire (Baudelaire), Jean Genet (Saint Genet, Actor and Martyr), Tintoretto (The Sequestered of Venice), Gustave Flaubert (The Family Idiot)… and himself (The Words). 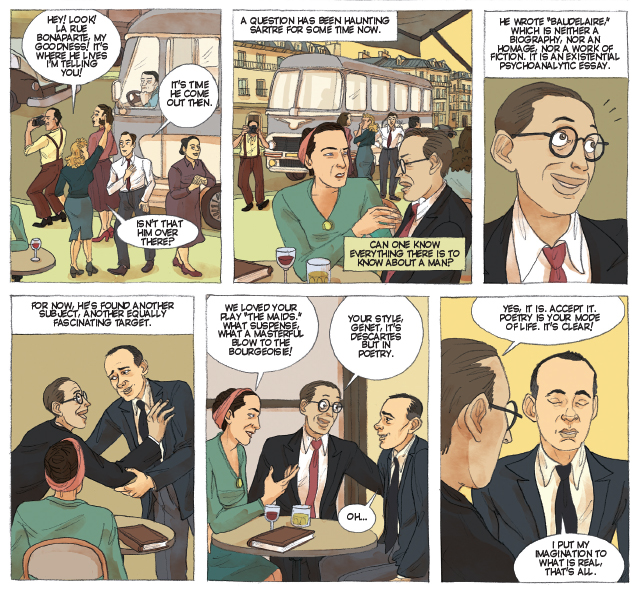 We could criticize him for being so stubborn to the point of writing an unreadable 3000 pages on Flaubert to “psychoanalyze” him and therefore completely avoid the main concept of psychoanalysis. Ironically, he came to the same conclusion as Freud; a psychoanalysis is endless (even if not useless). Maybe he pursued the question of the unconsciousness not out of intellectual curiosity but fear. Sartre was approaching death at the time of the writing of this colossal book and was using many destructive drugs. It was also the time when he missed the ’68 revolution in Paris and was accused by the youth of being a bourgeois writer; an intellectual who stayed in his comfy office writing on lofty issues while the streets were on fire.

As he was emphatically defending freedom he did indeed forget his privileged social milieu (born in the tony Saint-Germain-des-Prés, he received the best education possible). How then, could he dare to say that violence can be justified, if its noble aim is to defend freedom? Or that a slave somehow always has a choice, even if the only one way of escaping is in thought?

This graphic novel definitely does not solve these complex philosophical-political problems. My aim was to make them visible by showing the man behind these strong ideas and inconsistencies. “The little man” as his “amour nécessaire”, Simone de Beauvoir, called him affectionately. He was a stubborn man who loved life and people. An Epicurean who loved to travel and party. A radical artist who only used drugs for philosophy and not for literature, as literature had to stay “pure”.

While criticizing him, we could also give him credit where credit is due. As a young writer, I admit that I was charmed by his obsession for freedom, his relationship with Simone de Beauvoir and their many famous friends. In Sartre, I wanted to show the sexy and sometimes dirty back-stages, distilling anecdotes that are least well-known about him and Simone de Beauvoir. Also to show that it is not completely hopeless to cling to the defense of all kinds of freedoms, even at a time when the world seems to draw the outlines of an existential prison.

Mathilde Ramadier was born in the late 1980s in a small village in the Southeast of France. Growing up with Anaïs Depommier, they can't do enough sleepovers from one's house to the other. Inseparable at school, they spend their weekends building huts in the bush, watching the gendarmes go by, playing "Mouse Stampede" on a Macintosh Classic, and reading many comics. When it becomes time to prepare for the entrance exam to art school, they meet later in the evenings at the painter Jean-Michel Pétrissans' workshop in Valence. Mathilde Ramadier began her studies at the National School of applied arts and crafts. Then she moved away from graphics to study aesthetics and psychoanalysis. She completed her studies with a masters in philosophy at the prestigious Ecole Normale Superieure. For four years, she has also been running a weekly program on electronic music on Radio Campus Paris. Mathilde now lives in Berlin, where she writes about philosophy in general, sociology and ecology in particular. View all posts by Ramadier