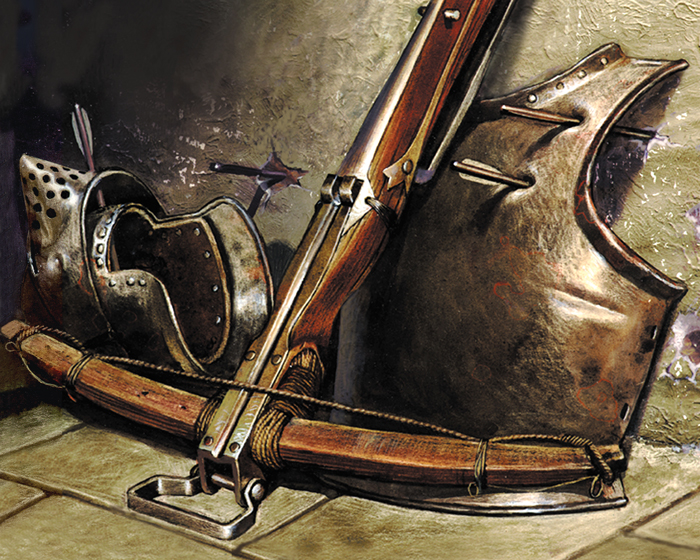 The medieval crossbow was a weapon that successfully competed against the large bow and was used along with portable firearms for a long time. A good crossbow could throw 6 oz. arrows at a 1300 ft. distance with great precision and huge penetration power, especially if the impact was perpendicular to the target.

Its biggest problem was its slowness and difficulty to load, which most of the time required special mechanisms. 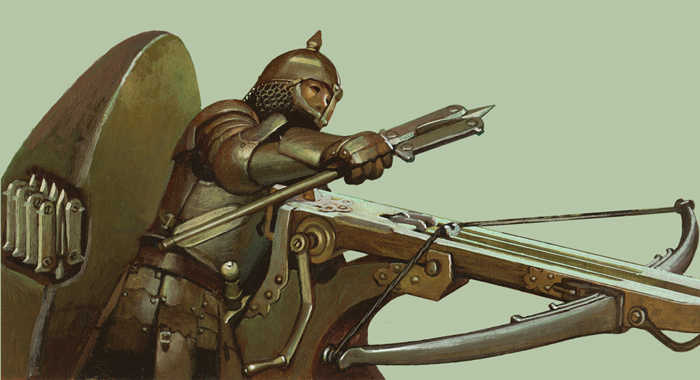 To the Mercenary’s surprise, at the Crater, he finds weapons he had never seen and that were unknown in his homeland. He distrusts anything new, which is to be expected considering the weird weapon carried by the guardian of the monastery.

I added some protrusions to the blades of the arrowhead that unfold when the arrow is shot, due to the aerodynamic resistance caused by the high speed of the projectile.

With a simple look, the Mercenary understands the mechanism of the artifact but his attention is caught by the weird way the weapon is mounted in the dragon’s saddle. Nan-Tay’s crossbow is very powerful without a doubt. The bow is formed by a steel sheet with several smaller support sheets like the suspension springs of a truck. It incorporates a large crank handle on the right for the difficult task of loading. Plus, the weapon moves vertically a little to adjust aim according to the distance of the target. The projectile shown here is not my invention: this system was already in use in the 17th century by the naval artillery to cut the riggings and anything else that stood in its way during maritime battles.