NBM Graphic Novels is proud to announce the release schedule through Winter 2019, including A Tale of a Thousand and One Nights: Hasib & the Queen of Serpents, a new graphic novel by one of France’s finest cartoonists, Ignatz and Angoulême International Comics Festival winner, David B.

Also arriving is the final volume in The Story of Lee trilogy by Sean Michael Wilson and Piarelle, as well as a bundled edition of the first two volumes.  Rick Geary fans can look forward to the release of new paperback editions of The Black Dahlia and The Axe-Man of New Orleans.

Comic legend and Howard The Duck co-creator Val Mayerik teams up with Jim Berry to produce the historical epic Of Dust & Blood: The Battle at Little Big Horn

A Tale of a Thousand and One Nights: Hasib & the Queen of Serpents
By David B.

Heir to the wise Daniel, Hâsib is a young woodcutter promised to a great future. When his greedy companions abandon him in the middle of the forest, he meets the Queen of the serpents. She then tells her story, a fabulous adventure filled with gods and demons, princes and prophets.

We find Prince Janshah madly in love with Shamsa, the bird woman of King Solomon. Love and perjury, epic battles and giant spiders ensue… From Kabul to Cairo, journeys intertwine with intrigues and spiritual quests while the fabulous nights follow one another.

An enchanting and intricately designed interpretation of the story of Hâsib Karîm ad-Dîm, through which fragment of the giant tale David B. opens us the gates of the Thousand and One Nights.

The Provocative Colette
By Annie Goetzinger

Many biographies describe this uncommon woman and author. It is her years of formation which are focused on here, from her marriage at the age of 20, until her divorce.

“One dies only from the first man,” she wrote in 1909. But this death was a new beginning, and the one that signed “Colette” from 1910 on gradually opened her eyes to her condition of a woman who was an exploited writer and a betrayed wife, and who will emancipate herself by writing, and with what talent!

Incredibly complex, powerfully determined, truly gifted, Colette challenged herself to reinvent her life and assert herself as a free woman. In her day, her behavior scandalized and vexed the establishment. But in the end, she helped to free women in their thinking and became member and then president of France’s prestigious Académie Goncourt, among many other honors as one of France’s preeminent authors. For mature readers.

The paranoid cult-classic science fiction mystery of the early days of indie comics returns! The series will begin with two books reprinting the original volumes, followed by the never before collected third album and concluding with an all-new fourth book of this epic series of conspiracy and paranoia.

Set against the background of a nightmarish 1950s crawling with communist spies, corrupt FBI agents, McCarthyites, Stalinists, cold warriors, flying saucers, mysterious government organizations, The Silent Invasion weaves a byzantine tale of mystery and deceit as a bewildered investigative reporter Matt Sinkage pursues the truth behind an apparent alien invasion of earth that points to involvement at the highest levels of American government officials.

Specially priced 2 volume set of the full story. When David loses his wife and child in a tragic car accident he decides, in anger at the cruelty of the event, to turn against God. He sets out to systematically break each of the Ten Commandments in order to both spite God and to get his attention! But will he go all the way, and break the commandment ‘Thou shalt not kill’? Two mysterious figures, Mr White and Mr Black, try to win David over to their side: the religious or the humanistic. Deeply sad in parts and comical in others, this modern story explores age old questions: Is there a God? And if there is, does that God care about us?

This thrilling tale details the day of The Battle at The Little Big Horn through the eyes of Greenhaw, a 7th Cavalry scout on one side of the battlefield, and Slowhawk, a young Lakota warrior on the other. Featuring appearances of Sitting Bull, G.A. Custer, and Crazy Horse, as well as generous portions of meticulously researched history on every page, the book’s art has been lauded as “Tremendous… Beautiful. Each panel and page could easily be a piece of solo art hanging on someone’s wall.”

The Beatles In Comics!
By Michels Mabel and Various

Here’s the complete illustrated story of the Beatles from their formation, through the Beatlemania phenom all the way through their breakup. We see how they evolved along with and amplifying the uproar of the sixties, became politically and socially active and have achieved a lasting impact unparalleled in pop music. Chapters combine text and comics for complete information presented in a fun way.

The Black Dahlia
By Rick Geary

Now in paperback. On January 15, 1947, a woman was walking with her daughter in a Los Angeles neighborhood. She passed what looked to be a discarded manikin. It turned out to be the body of Elizabeth Short: posed, drained of blood, meticulously scrubbed, and cut in two.

From this point, Geary reconstitutes and reveals for us the life of this 22 year old woman who had become known as “Black Dahlia” because of her striking appearance. She had moved to LA to make it in show business. How could her life have ended in such a ghastly fashion? Was it a jealous boyfriend, a rejected suitor, or one of LA’s notorious mafia connections whom she had apparently been dabbling with? The case gets more complex when, days later, a local newspaper receives a cut-out letter from an anonymous “Black Dahlia Avenger” admitting to the crime. More letters follow toying with the LAPD.

Eisner Award winner Geary takes us through all the twists and turns in one of the most captivating unsolved mysteries of the 20th century in this latest installment of his Treasury of XXth Century Murder.

The Axe-Man of New Orleans
By Rick Geary 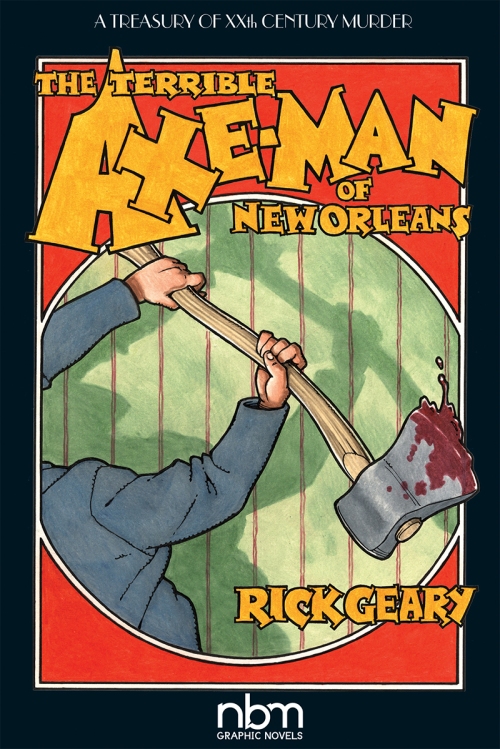 Now in paperback and e-book. Nights of terror! A city awash in blood! New Orleans right after the First World War. The party returns to the Big Easy but someone looks to spoil it.

Grocers are being murdered in the dead of night by someone grabbing their axe and hacking them right in their own cushy beds! The pattern for each murder is the same: a piece of the door is removed for entry, the axe is borrowed on the property, and the assailant aims straight for the head! Why? How could he fit through that piece in the door? The man is never found for sure but speculations abound which Geary presents with his usual gusto! 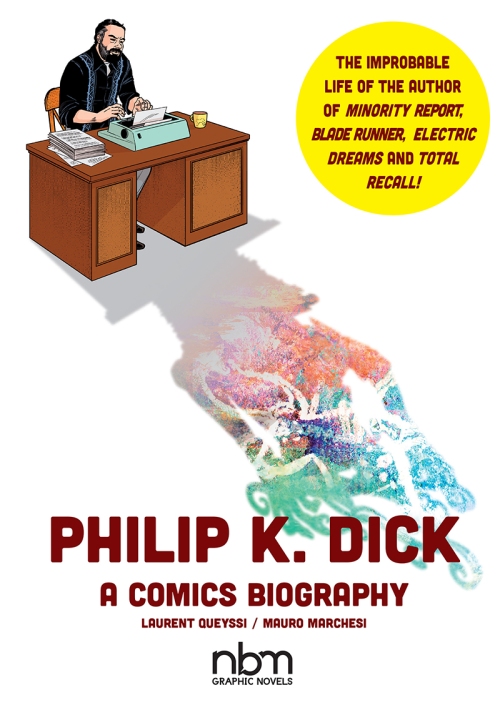 One of the greatest writers in SF history, Philip K. Dick is mostly remembered for such works as Blade Runner, Minority Report and Total Recall. His dark fascinating work centered on alternate universes and shifting realities in worlds often governed by monopolistic corporations and authoritarian governments.

His own life story seems a tussle with reality, going through five wives and becoming increasingly disjointed with fits of paranoia and hallucinations fueled by abuse of drugs meant to stabilize him. His dramatic story is presented unvarnished in this biography.

The Story of Lee Vol. 3
By Sean Michael Wilson and Piarelle

In the final volume of The Story of Lee our two main characters, Lee and Matt continue their studies and their relationship in the UK. With growing confidence Lee asserts herself more and Matt finds that he needs to change or challenge. Change to be more the way she likes, or challenge her ideas and risk upsetting their relationship.

Meanwhile a Chinese student becomes a rival to Lee’s attentions and Matt finds himself in both financial and existential trouble. Against the backdrop of increasing societal turmoil back in Hong Kong Lee’s father gets sick and she has a big decision to make: go back home to help, or pursue an independent life in the UK?