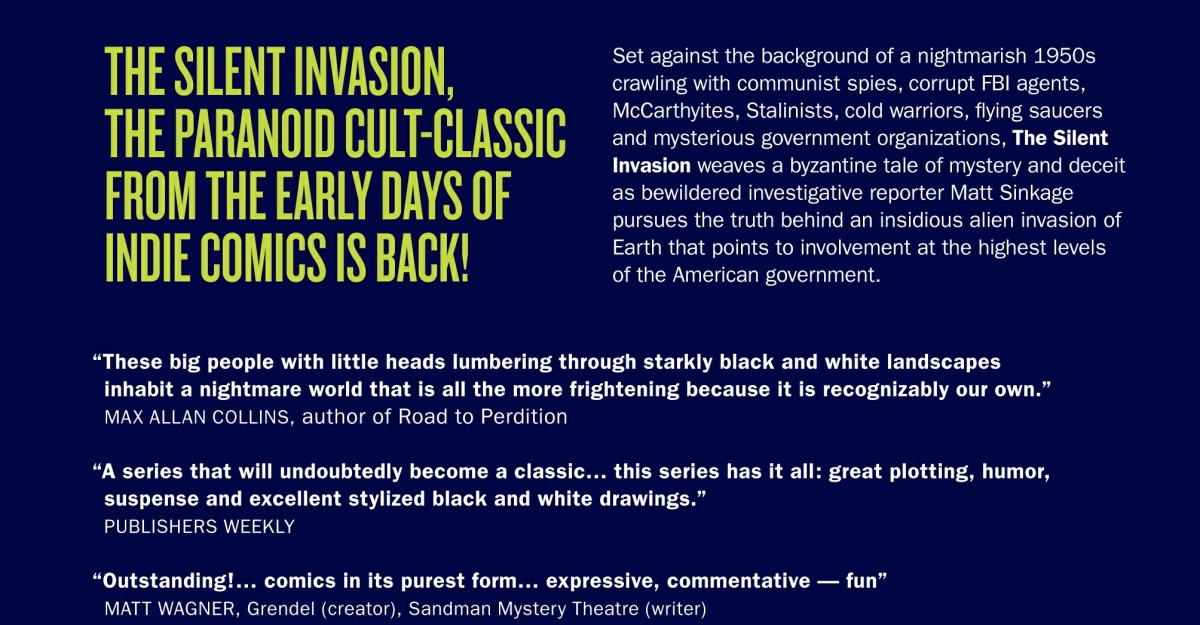 When  The Silent Invasion  was released, first as a comic book by Renegade Press in 1986, and then as a series of graphic albums by NBM in 1988, the series was well received by reviewers.

Upon seeing the first NBM album, Publishers Weekly said, “A series that will undoubtedly become a classic… This comic has it all: great plotting, humor, suspense and excellent stylized black-and-white drawings.”

But even during its comic book days, our series was getting serious acclaim. Amazing Heroes magazine chose The Silent Invasion as #10 on its list of ten best comics of 1986 – not just #10 of indie comics, or black-and-white comics – but of all comics released that year!

We were also finalists in the category of Best Black-and-White for the 1987 Jack Kirby Comics Industry Awards (the precursors of the Harveys and the Eisners).

The Comics Buyer’s Guide referred to The Silent Invasion as “one of the lesser-known gems of comic books today” and went on to say that “the art style, which seems at first like a drawback, is actually one of the series’ strongest assets. It is a stark, no-frills style that makes some of the best uses of solid black areas.”

Maclean’s (Canada’s weekly newsmagazine) , in an article entitled “The comic book’s quest for maturity” said that “Hancock’s smart, slangy dialogue… and Cherkas’s blocky black-and-white artwork have the melodramatic charge of theme music from Perry Mason” and said that the series is “rich in ambiguity.”

In his article in Playboy in the December 1988 issue, Harlan Ellison included The Silent Invasion as one of several examples of the blossoming of comic books as a significant and meaningful art form.

To conclude, for the time being, I want to give you one of my favorite quotes about our series. This is from the Amazing Heroes article describing why we were included on the list of ten best comics of 1986. “Both the writer’s and the artist’s vision seem to spill from the same fever-dream of dimly remembered images and horrors that it’s hard to believe this is the work of a team and not a lone, obsessed cartoonist. This is one of the most unsettling comics I’ve ever read…. This is a very original work of great potential.”

In a future posting, we’ll bring you some more reviews and excerpts from letters we received from other comic professionals!