Many fans and readers have asked us (all right, maybe one or two) “Where is the Union City that we see in The Silent Invasion?” Now is a good a time as any to try to answer this burning question. 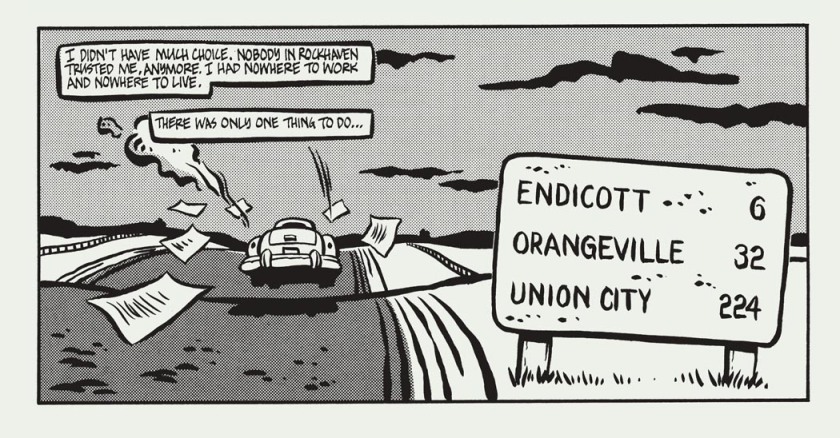 As you can see by the sign in the above panel, Union City is miles from “Rockhaven” (see “The Rockhaven Conspiracy” in our upcoming book The Great Fear), but only a short drive from Endicott which is just down the road from Johnson City and Binghamton, New York. However, Orangeville is northwest of Toronto. Obviously the aliens have been messing with our universe.

It is a place dripping with paranoia. 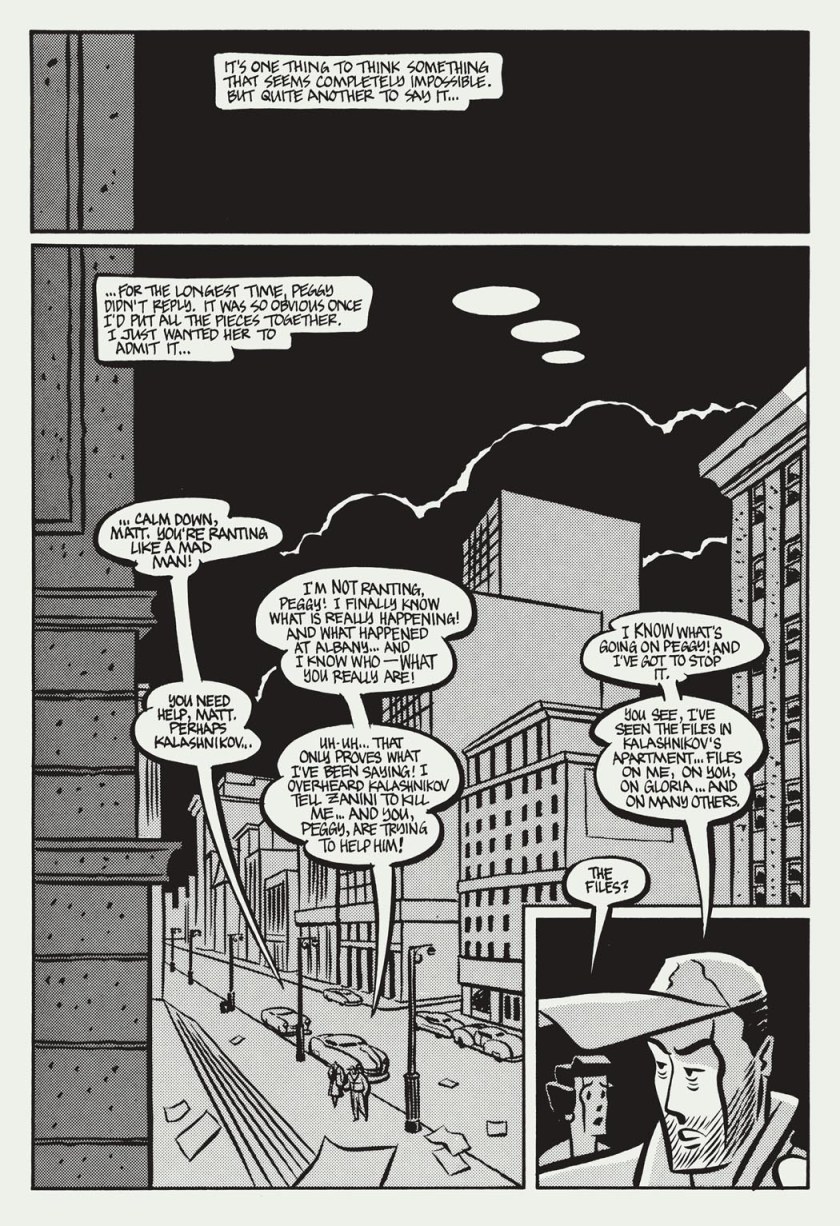 The Union City found in The Silent Invasion is not located in New Jersey, California or Ohio. It could be located in Ohio—but not where the real Union City, Ohio is on the border of Indiana. And it’s not in Connecticut, Georgia, Indiana, Michigan, Montana, Oklahoma, Pennsylvania or Tennessee (other states that have places named Union City).

Our Union City is a place where the streets are have no names and are devoid of life. Buildings tower and twist over the few brave souls who venture out into the lonely night where newspapers blow through the empty streets. 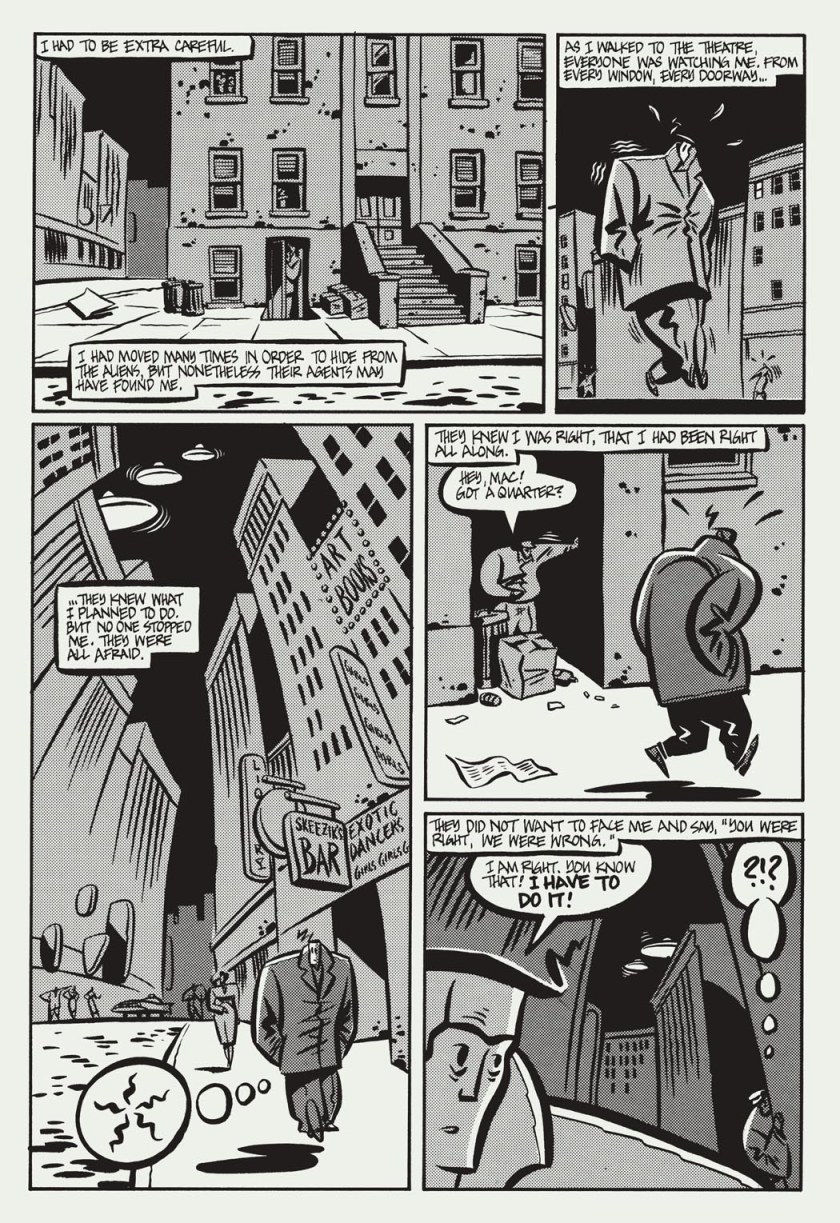 When we set out to create The Silent Invasion, Larry and I both wanted to set the series in a generic comic book city much like Superman’s Metropolis, Batman’s Gotham City or The Spirit’s Central City. It would be a place that was fairly large, close to a million people in population. It would be located in a fictional part of America that’s not far from deserts, mountains, cottage country or rolling farmland. Union City is close to whatever setting a particular story demands.

And of course it’s always 1957, whether the actors in our stories like it or not. 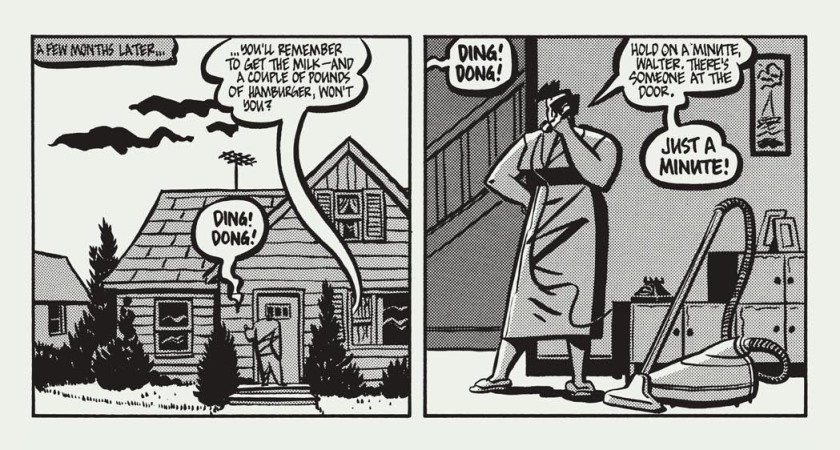 But where in that fictional America? We like to think it’s located on one of the Great Lakes. No deserts or mountains nearby, but it’s an alternate universe. How do we know that? Because in The Silent Invasion Union City is one of 12 American cities to have a franchise in a 24-team Canadian Football League. More on this in a future post for all you CFL fans out there!

In this page from a new story set in 1970, we see Walter Sinkage’s work pals trying to get him to watch a game between the Union City Pipefitters and the Sarnia Imperials. 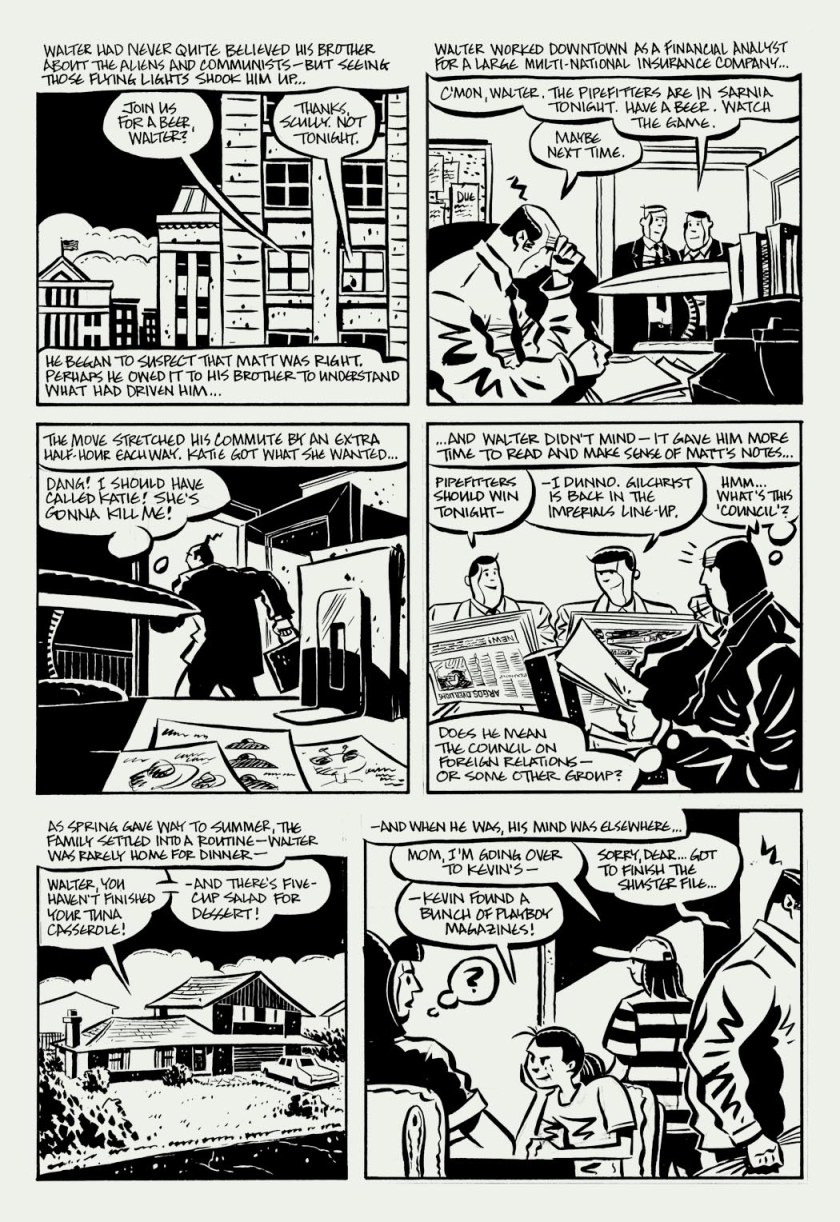 At the end of the day, I think our real inspiration for Union City was Buffalo, New York.

I grew up in Oshawa, Ontario; Larry in nearby Whitby. They’re on the north shore of Lake Ontario, about 50 kilometres east of Toronto and almost directly north of Buffalo. As kids, we watched American television coming out of Buffalo. American TV was always more exciting than the fare being served on Canadian channels. Commander Tom was on at 3:30 showing the old Superman TV show; Irv Weinstein read the news on Channel 7; and there always seemed to be a fire somewhere in Buffalo with “film at eleven!”

And Toronto didn’t start to become exciting until at least 1967, maybe even a few years later. 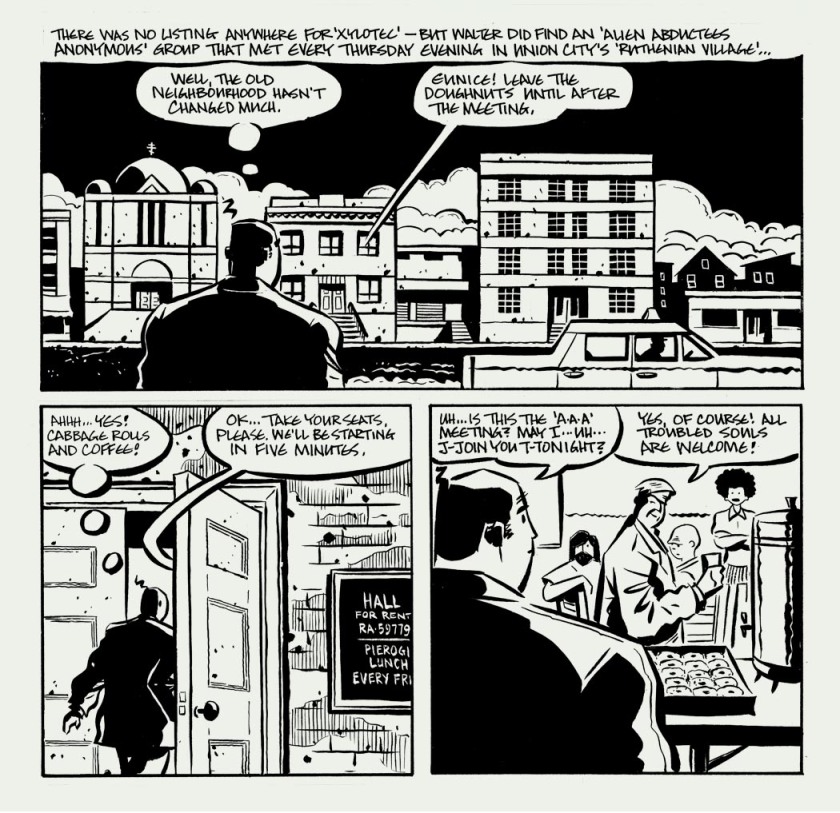 Larry has said Union City might be located somewhere on the south shore of Lake Ontario between Buffalo and Rochester. 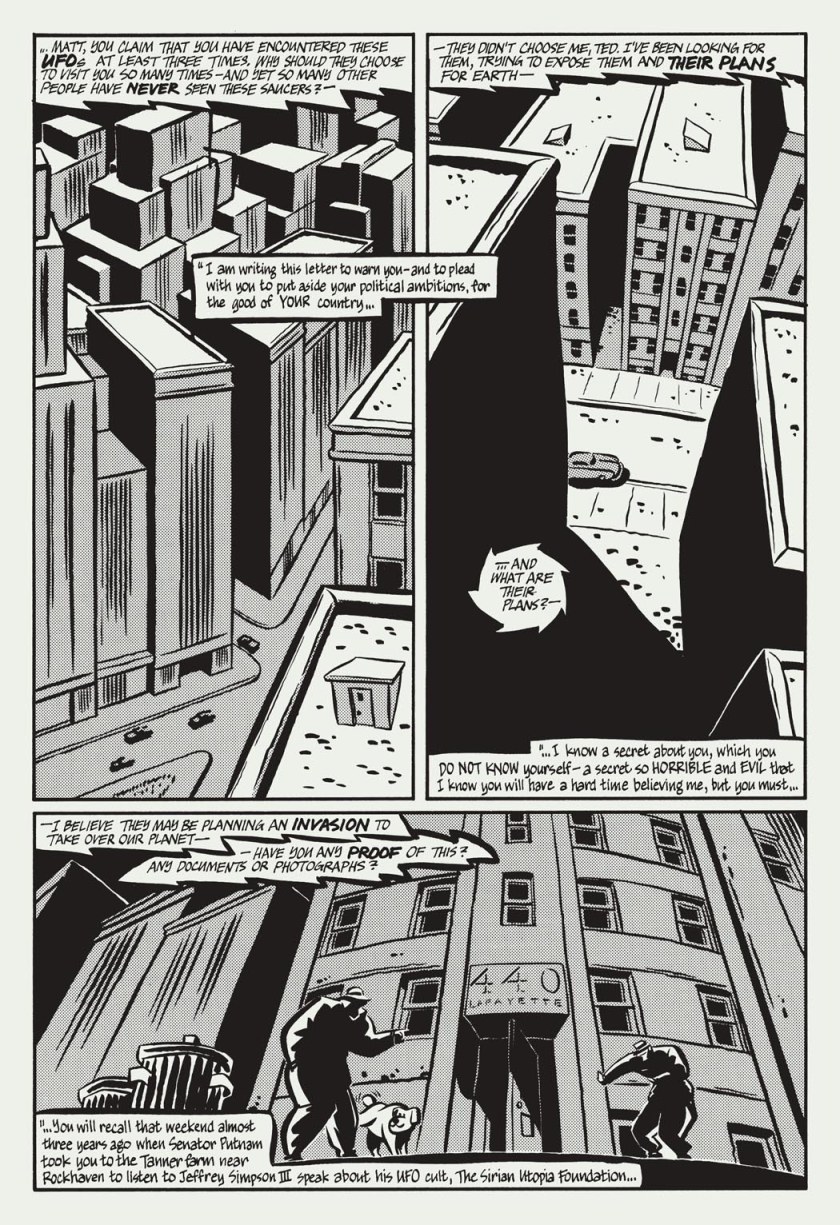 Remember to watch the skies!