My newest book, on Love this time, will hit bookstores in June! It will be first available at the TCAF comic con in Toronto on May 11 & 12, which Yiri and I will be attending (find us at the NBM booth for a chat!).

The first review, from Publisher’s Weekly is already in, and I’m really happy that they call it upbeat, good-natured and affable:

The latest in de Heer’s series of simple, cheery graphic novel guides to big topics like science, philosophy, and religion finds the Dutch cartoonist tackling the meaning of love. Taking her own romantic history and current relationship with her husband (and colorist) Yiri Kohl as the opening story, she expands into such subjects as the history of marriage, the chemical components of desire, the seven kinds of love identified by the ancient Greeks, and the Kama Sutra and Song of Songs. Her gesticulating cartoon avatar shares her expertise on romance novels and attends a speed dating event. It’s an upbeat and good-natured sampling of issues related to partnership, lust, and romance, but the topic of love is far too vast to be covered satisfyingly in a 120-page comic. The broadly smiling, roly-poly cartoon characters and bright colors make the arguments accessible to a fault. Ultimately, the cartoon version of de Heer reaffirms her relationship with Kohl, but she doesn’t come to any conclusions that could be considered truly universal. While affable, this is an unchallenging ramble through a topic that could easily provide fodder for an entire separate series of graphic investigations.

It is true that I found it hard to come up with truly universal truths about love. In my own experience, the subject is so complex, that when you want to condense it you either have to describe purely scientific facts or stick to personal experience, in order to avoid reverting to platitudes. In this book (as in all my books), I’ve done both: the broad view with facts such as the history of marriage, contents of the Kama Sutra and chemicals in the brain, AND my own personal story of being in a long-term relationship with Yiri. 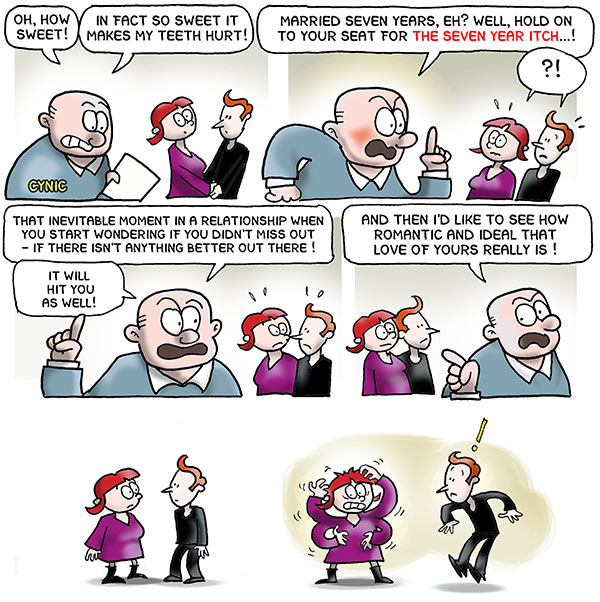 Will our marriage withstand the onslaught that is the Seven Year Itch…? Read all about it in ‘Love – a Discovery in Comics!’

Oh, and I also threw in a few frivolities, such as this:

Of all of my books, this is the one I had most fun with drawing. I hope lots of readers will LOVE it!