Here are upcoming titles, now being solicited in comics stores through Diamond Previews for a July 2019 release.

Zombillenium Park has never been better: its popularity has peaked following demonic reforms by Behemoth, who then decides to play his property in a very special competition … A witches’ Sabbath!

Gretchen, Aurelian and Von Bloodt, meanwhile, have set up an underground escape network in order to offer the damned the chance for reconversion, far from the nine circles of Hell, a dangerous secret operation not appreciated by the park’s board of directors. Determined to clean this out, they hire the services of a formidable enchantress who will turn into an arch-rival of Gretchen. Underground as in the air, the fight promises to be epic!

The resistance is organized in this fourth volume of Zombillenium, the monstrous bestselling and award-winning series by Arthur de Pins, eagerly awaited by fans after a long hiatus! What are Gretchen’s true intentions? Will the undead succeed in asserting their rights? Who will be the future happy owner of the Zombillenium Park? Not to be missed!

All presented in De Pins’ trademark tongue-in-cheek jubilant black humor and stunning art, combining the out of print volumes 1 and 2 into one volume

. Francis von Bloodt, vampire, a good family man, manages the theme park Zombillenium. They don’t just hire anyone, at Zombillenium: mere mortals need not apply, the park works only with genuine werewolves, vampires and zombies. This is what Aurelian gets to discover as, burnt out, deceived by his wife, he finally gets ‘hired’ in spite of himself in this strange business. Gretchen, a plucky trainee witch, helps him get around…

In the second chapter, Tempers are flaring around Zombillenium, the monster amusement park run by monsters. When one hires only the dead (or witches!) in a region where unemployment is in the double digits, one must expect some friction. But things get particularly ugly when the park’s security is breached from two sides: activists and a very strange visitor, mom to two peculiar sons the head of the park seems to remember from somewhere… Gretchen and Aurelian do their best to help save a precarious explosive situation!

Brought in by Behemoth himself, the vampire Bohemond Jaggar de Rochameau IIII is officially supposed to help CEO Francis in managing the park. But the employees expect the worst: isn’t he known as a cold-blooded killer? If one looks more closely, the reasons for his coming may seem less anodyne than announced.

Of course, his mission is to increase return on investment for the shareholders, but for Behemoth that return has to be in souls. Francis is appalled but obligated to kowtow to the almighty consultant, determined to take power and pervert the rules of Zombillenium.

Meanwhile, Aurelian goes through a bad patch. Depressed by his immortal status and the absurdity of his life… sorry, his death, he’s burned out. And burnout, in a powerful demon, can be devastating. Held back in extremis by Gretchen, he avoids the worst. This is timely, because Gretchen has a plan for him…

A particularly biting new episode of Zombillenium in which we discover the underbelly of the most monstrous amusement park in the world.

THE FAIRY TALES OF OSCAR WILDE, Vol. 1: THE SELFISH GIANT AND THE STAR CHILD
Illustrated by P. Craig Russell

One of comic art’s most respected and pioneering artists, well known for his opera adaptations and beautiful fantasy work, P. Craig Russell is in the process of adapting Oscar Wilde’s famous fairy tales in a series of landmark volumes.

THE FAIRY TALES OF OSCAR WILDE, Vol. 2: THE YOUNG KING AND THE REMARKABLE ROCKET
Illustrated by P. Craig Russell

THE FAIRY TALES OF OSCAR WILDE, Vol. 3: THE BIRTHDAY OF THE INFANTA
Illustrated by P. Craig Russell

THE FAIRY TALES OF OSCAR WILDE, Vol. 4: THE DEVOTED FRIEND AND THE NIGHTINGALE AND THE ROSE
Illustrated by P. Craig Russell 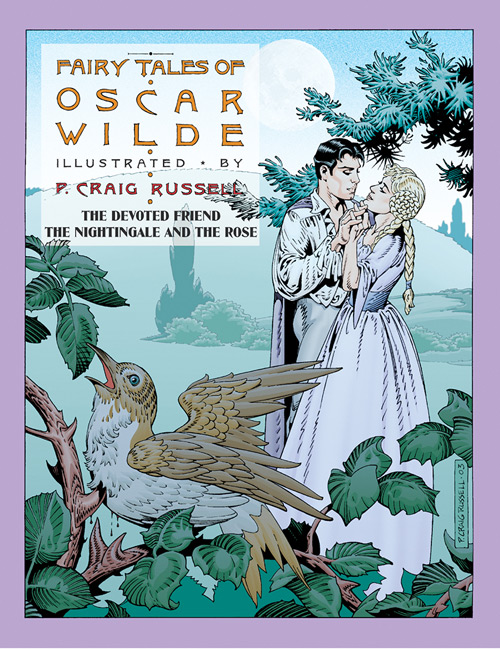 The next volume in the prize-winning and greatly acclaimed complete adaptations of Wilde’s tales presents The Devoted Friend on what constitutes real friendship, and The Nightingale and the Rose a stirring story of sacrifice to love with a cruel twist.

The Happy Prince is arguably the most famous and well-loved of Oscar Wilde’s nine fairy tales, rivaled only by The Selfish Giant. It is also a very timely tale at a time of controversy over the increasing chasm between rich and poor…The Happy Prince has lived a life of opulence but has died young and his soul inhabits a beautiful ruby encrusted statue covered all over in gold leaf. From his perch high above the city he is witness to all the poverty, misery, and hopelessness in which his people have been living.

When a small barn swallow in flight to the warm south ahead of the approaching winter stops to rest upon the statue the Happy Prince prevails upon him to delay his travels in order to remove his gold leaf a piece at a time and shower it upon the poor citizens. Out of love for the Happy Prince the swallow does his bidding. As the days pass the Prince’s beauty is stripped away and as winter sets in the bird’s fate is sealed. In the spring the townspeople finding only a dull statue with a broken lead heart and a dead bird consign the worthless objects to the ash heap.

Only an emissary of God recognizes them as the most valuable treasures of the city and brings them to the gardens of heaven.