The Toronto Comic Arts Festival was a blast! It’s one of the biggest and nicest comic festivals I have ever attended, and just like in 2015 (when I was there last) it was wonderful to be there. Even more so, because this time I was Featured Guest and had a premiering book: Love: a Discovery in Comics.

That’s me, loving my new book – and publishers Jeff Whitman and Terry Nantier in the background.

Another great thing this year was that I was one of five Dutch comic artists attending. Our national comics child prodigy Aimée de Jongh was there (okay, she’s not a kid anymore) promoting both Blossoms in Autumn and her new Taxi: Stories from the Back Seat.

This is her, signing just around the corner from where we were sitting:

Another colleague from home was Chad Bilyeu, who is originally from Cleveland, but has been in Holland for ages and is the author of the wonderfully revealing series Chad in Amsterdam.

Last but not least there was Typex, our comics rock star, whose masterpiece Andy (about Andy Warhol) is taking the comics world by storm. 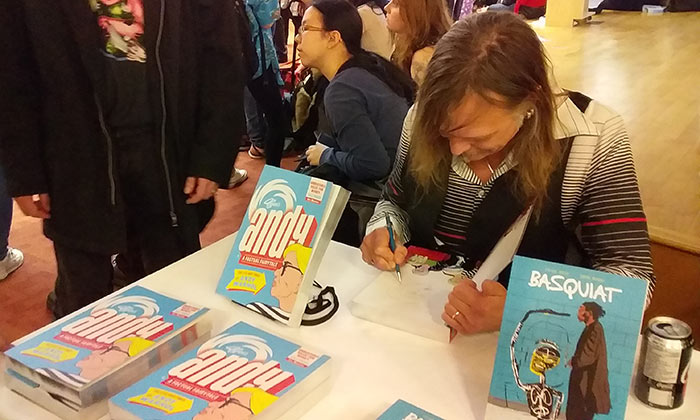 The coolest thing was that I got to do a panel with him, about Dutch Comics, moderated by Mark Nevins:

Not only that – I also got to be on a panel about Science and Comics, with Maki Naro, Mike Holmes, Alison Wilgus and moderator Johanna Draper Carlson: 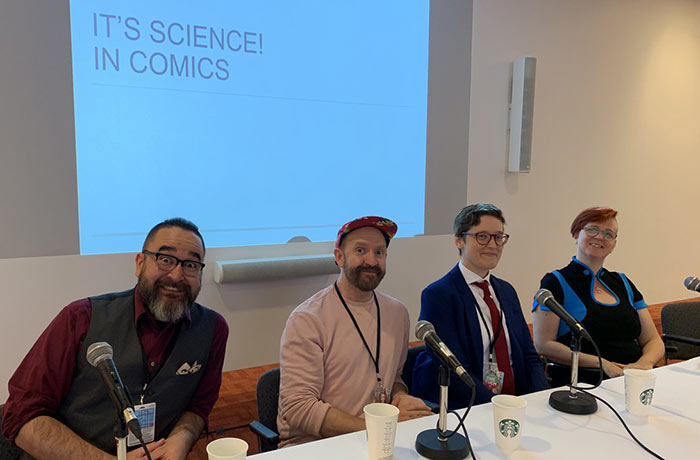 While Saturday went by in a frenzy of signing, panelling and generally being elated by everything, Sunday allowed for some time to chase for comics myself.

This is our loot:

The NBM table did very well, by the way! Here’s the Before picture of my end:

And this is the After…:

If you missed my cute little promotional booklet Ten Tips For A Broken Heart and are in the Toronto area – I dropped off a whole bunch at comic store The Beguiling.

Thanks to everyone who made TCAF 2019 such a memorable experience! We definitely hope to be back one day.