In my book Love: a Discovery in Comics I have drawn one chapter about Love from a religious perspective, taking a look at two scriptures: the Kama Sutra and Song of Songs.

The Kama Sutra is mainly known for its detailing of sexual postures – but it’s so much more! Originally meant for students leaving their guru to go into married life, it gives hints and tips about a lot of things, from decorating your house to recipes for love potions. I drew a 2-page spread depicting the scope of this document.

I dwell briefly on one of my pet subjects (as people may recognize from my books Philosophy and Religion): the difference in eastern and western spirituality, and therefore the ideas about the body and sex: 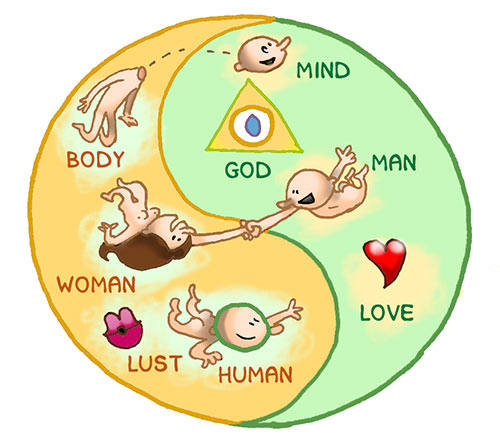 Read all about it in Love: a Discovery in Comics! Now in bookstores (or very close).