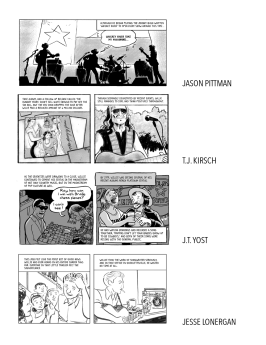 Hello readers! It’s been quite a while. I’ve been behind the scenes quite a bit working on my next project…and here it is!

In September 2020, NBM Graphic Novels will release an extensive comic biography of country music icon Willie Nelson, written by Yours Truly! It will cover his entire life and career, beginning in Hill County, Texas in 1933. We’ll see all the ups and downs of his long career, family and activism up until the current day.

I’ll also be working on some of the art, along with an amazing group of talented cartoonists, including;

T.J. Kirsch is a cartoonist and illustrator published by Oni Press, Image, Archie, and NBM. His career began at Archie Comics shortly after graduating from the Kubert School in 2005. Recent works include She Died In Terrebonne: A Sam Kimimura Mystery with writer Kevin Church, and Lost And Found with writers Christina Weir and Nunzio DeFilippis for Oni Press. Pride Of The Decent Man, his first original graphic novel, was released by NBM in 2017. He lives in the capital region of New York state with his wife and daughter. See more of his work at www.tjkirsch.com. View all posts by T.J. Kirsch