That’s right, now through October 30th, we’re offering 20% OFF all titles in stock at the NBM Online Store.

Experience some of the best graphic novels from across the world including:

Click here to and enter coupon code E20 in the coupon box when ordering. Promotion expires on 10/30.

(Free Print Offer Not Included With This Sales Promotion).

My upcoming book Philosophy: a Discovery in Comics could be called “educational” (and I’m very flattered when people do) – but it’s just as much “autobiographical”. Ever since I started in comics – in 1998, I was a late bloomer – I wanted to draw about myself. It so happened that at that time there was a surge in Dutch comix of female autobiographies, with the publication of three women comic artists, who were called “The Big Three” for a long time:

I loved their comics, so if I wanted to do something in the same genre, I’d have to make sure it was sufficiently different from what they made. And with that thought, a journey in search of my Autobiographical Self started.

This was my first depiction of myself, walking into the studio of Maaike Hartjes, where I drew my first self-published comics. At that time I was 26 years old, thin and pretty clueless about where to begin when starting my own comic.

For the first few years, I tried drawing all kinds of different styles. I copied styles I liked. I drew myself realistically one day, cartoony the next. It was almost a therapeutic process, expressing not only different emotions but also coming to grip with my self-image. 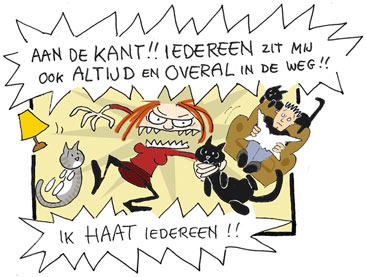 See what I mean? That’s Bitchy Bitch from Roberta Gregory, a comic I absolutely devoured.

And then, in 2002, a new relationship brought step-children into my life, and my comic character changed to a more sedate young woman who (usually) stayed calm in all the dramas of family life.

I grew, as a person and as a comic character. Literally. I started putting on weight and although I was quite comfortable with it, I had to re-invent my comic persona: no longer young and thin, but mature and “filled out” (and blond for a while!).

At the same time my comics changed from being purely autobiographical (like the webcomic I did in 2005) to being more educational. I made “comic reports” for national newspaper Trouw, so my character became a reporter. This meant a more cartoony approach, which I still use in my books. It’s very convenient: my comic persona is ageless, easily identifiable and still looks like me (thanks to my unconventional hairdo, which I’ll never change unless I want to be “incognito” of course).

The self-image and identity of an autobiographical comic artist is a very visible thing, and it’s exactly that which makes it my favorite genre. Making autobiographical comics is a brave and vulnerable undertaking, which is rewarded in the end by finding oneself on the pages of the Book of Life (Ooo, that’s deep!). 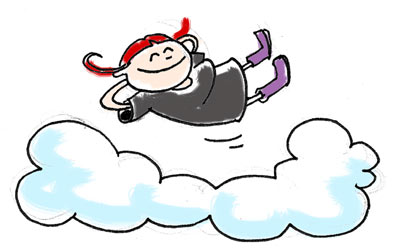 That being said, a few weeks ago I met up with my little brother (he lives in Berlin, so we don’t see each other very often). He grabbed me brotherly by the neck and exclaimed: “My god, Sis! You have a hump!”

I do, I know it’s there, it’s the badge of honor of a serious cartoonist, always bent over her work.

But having it pointed out by my younger (and gorgeous) brother struck a chord. It made me wonder if I shouldn’t re-draw myself. So that people who know me from my comics who meet me can exclaim: “Oh, you’re so much prettier in real life!” And I can rub that in my brother’s face. With his big nose. 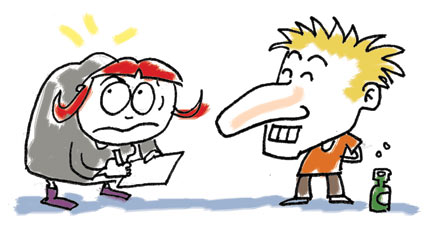