Last weekend, my father took me to a concert. I’m not a particular concert-goer, but this was special: it was the performance of Canto Ostinato, a piano piece that has been the soundtrack of my life since I was about thirteen years old. Only later I learned it is a great example of fundamentalist minimalistic music, tonal and harmonious. It was written in the late 1970s by Dutch composer Simeon ten Holt and you can click here if you want to read more about him and the many facets of this fantastic piece.

But the best thing is just to listen it.

It has been performed in numerous settings and with various instruments, of which the four-piano version is one of the most impressive and entrancing. Here’s a great rendition, with images of symmetries in Dutch landscapes as an added bonus:

The version my dad and I saw was for two pianos. We sat in first row, so the sound was really close and enveloping. Plus, I got a good view of the subtle footwork of one of the pianists, Polo de Haas. I brought a small leather notebook and drew this: 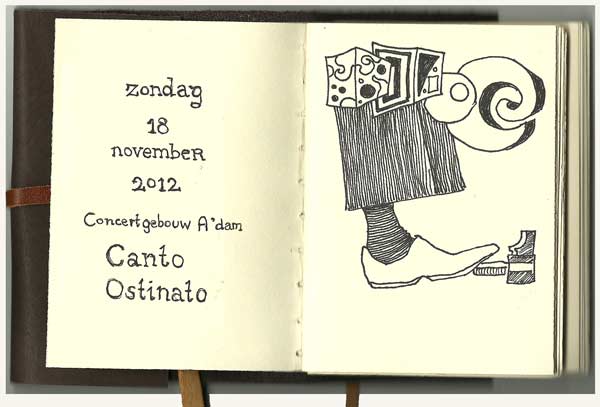 I find this music evokes a lot of imagery for me – mostly abstract but also natural – like the rhythm of breathing, or breaking waves.

So I drew this:

Then I realized I had drawn this before, and a lot better.

In 2006, on a holiday in Ireland, I found the CD of Canto Ostinato in the house I was staying in, and I listened to it in one long session and drew and drank port the whole time, trying to capture every shift in the music. It became a very long illustration. The picture beneath is part of it. If you click on it, you get the full version. Best viewed with the music from the video above playing in the background.

By the way, the translation of Canto Ostinato is ‘stubborn song’. Isn’t that great?