On April 6th & 7th, NBM Graphic Novels will be attending The MoCCA Arts Festival, a 2-day multimedia event and Manhattan’s largest independent comics, cartoon and animation festival, which draws over 7,000 attendees each year.

With 400 exhibiting artists displaying their work, award-winning honorees speaking about their careers and artistic processes and other featured artists conducting workshops, lectures and film screenings, the Festival mission accelerates the advancement of the Society’s broader mission to serve as Manhattan’s singular cultural institution promoting all genres of illustration through exhibitions, programs and art education.

This year, NBM and Papercutz will be premiering two titles at the show.

Appearing on behalf of NBM is Ted Rall, writer of THE YEAR OF LOVING DANGEROUSLY.

It’s New York City in the 1980s and Ted Rall is in college. Everything is fine before his pranks, lack of focus and restlessness get him expelled. Unable to find a job and rejected by his parents, he considers suicide. By happenstance he finds comfort in the arms of many women as he bed-hops around the five boroughs. It’s better than homelessness, but the psychic toll of selling himself and his affection was higher than he imagined.

Both acidly funny and brutally honest, Rall, a cartoonist both beloved and reviled for his edgy politics, pours out his guts in this remembrance of this most difficult chapter in his life in this revised paperback edition.

Ted will be appearing at the NBM Booth (#D149-150B) throughout the show and will be signing during the following times:

Also premiering from our sister company, Papercutz, is THE ONLY LIVING GIRL. Writer/co-creator David Gallaher will be in attendance.

Zandra ‘Zee’ Parfitt is one of the last human survivors of a cosmic disaster that merged hundreds of planets into the mysterious patchwork wasteland of Chimerika. After learning that the experiments of her late father, the diabolical Doctor Once, created this world, Zee and her companions — classmate Erik Farrell and mermaid warrior Morgan — embark on a dangerous quest filled with robots, monsters, unknown civilizations, and unlikely allies. Together they push back against the relentless Consortium, who want control of this new world at any cost. Through it all, Zee searches for the truth of her past so she can redeem her father’s legacy.

David will be appearing at the NBM Booth (#D149-150B) throughout the show and will be signing during the following times:

All of our latest titles will be available at our table and we’ll also have looks at upcoming releases.

The 2019 MoCCA Arts Festival will take place at Metropolitan West in New York City with programming mere steps away at Ink48 (653 11th Ave).

Kumoricon is coming up quick!

Maybe it’s weird that it’s surprising to me, but people really like my book about a robot and they keep buying it! Hope I have enough copies to last the weekend! 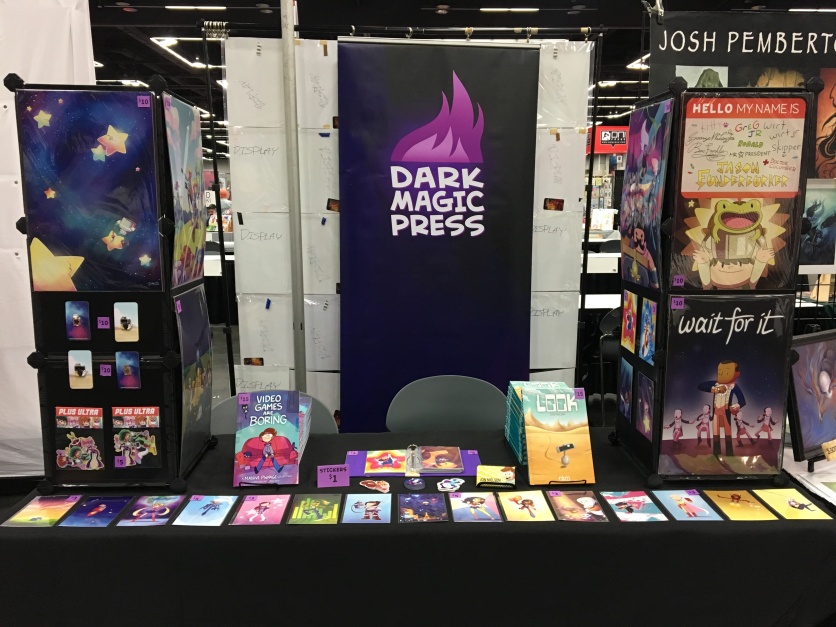 I think I say it every year but #rccc was an amazing con! I met so many cool people and made some awesome new friends! I have a bajillion ideas on how to make the next show even better and I can’t wait to get back to work.

I’ll be at RCCC again this year and ooh man will I have a lot of goodies. 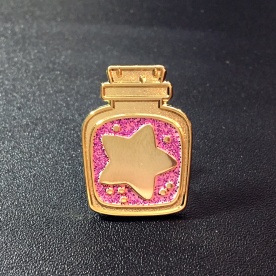 If I took one thing away from Kumoricon, it’s that I should be playing Persona 5. Apparently it’s a pretty big deal?

Also: people REALLY like graphic novels about sad robots! I’ve never had an item that consistently sells as well as my little robot book. It’s a nice, new feeling! 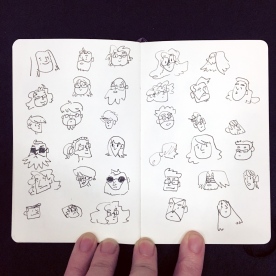 More cons are happening! This time you’ll be able to meet my current human form at an anime convention called Kumoricon! It’s an exciting real thing that is totally happening and not something I’m making up!

I wouldn’t do that! 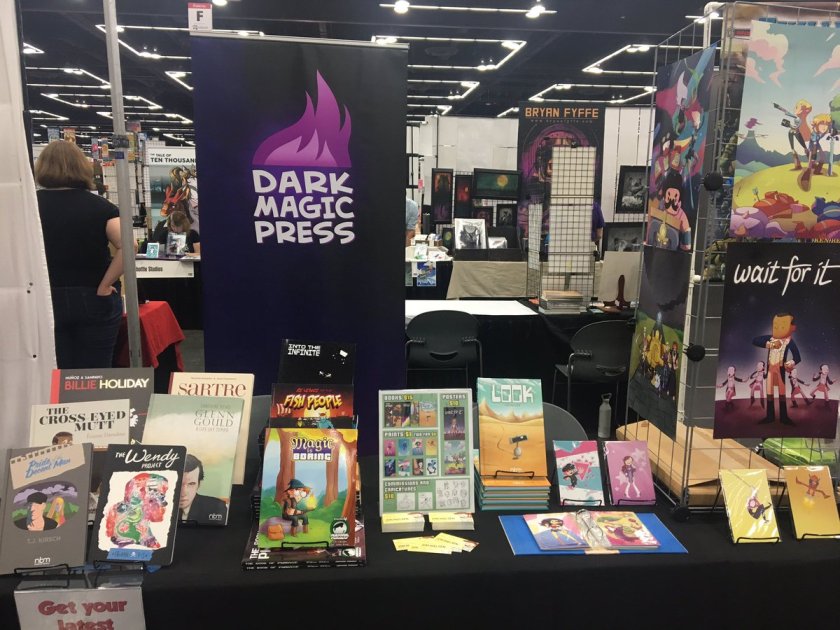 There’s something about cons that really gets me pumped to create. Maybe it’s being surrounded by all of the amazing artists of Artist Alley, or the waves of incredibly nice people buying and complimenting my art, or just being completely emotionally exhausted by the end of it. Whatever it is, the second I get home I immediately get to work on one of the crazy new projects that is my current obsession.

And this year was no different! I go to RCCC every year and this was definitely my best and favorite year of all time. 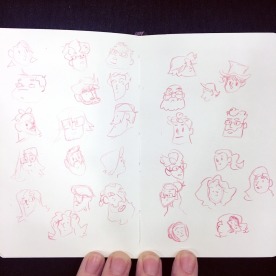 As we head toward the end of 2017, NBM Graphic Novels is continuing to celebrate its 40th Anniversary with appearances at a number of shows with special guests in attendance. At all convention appearances there will be a selection of our latest titles on hand available for purchase.

Panel: Filling In The Pieces: Comics Biography
White Flint Auditorium 9/16 5:00 pm – 6:00 pm
When doing a comics biography, how do cartoonists approach the material they have at hand? For Box Brown, who did a biography of Andre the Giant, he struggled to find material that might reveal the wrestler’s inner life. Anais Depommier had to sift through a mountain of material for her biography of Jean-Paul Sartre, a task made all the more difficult considering how much the philosopher wrote about himself. Luke Howard had to deal with a historically and racially sensitive topic in ragtime creator Ernest Hogan. Moderator Chris Mautner will lead the discussion. Anais Depommier appears courtesy of a grant by The Cultural Services of the French Embassy.

I’m going to be at RCCC again this year! But this time won’t be like my other years tabling there, oh no. For this year I will have in my possession a tome of incredible power. A book containing knowledge beyond imagining. A book about a little robot. And his friend.

Hope to see you there!

Some time has gone by and I think I can finally articulate just how rad MoCCA Fest was: it was incredibly rad.

There was a real focus on comics and graphic novels that gave the con a very unique atmosphere. I really felt as if I was “among my people,” as it were.

I met a ton of amazing people, signed some books, had the best — and most expensive — burger I’ve ever had, and survived the streets of Hells Kitchen. Did you know that’s actually what they call that part of New York? Like, it’s on the maps and everything!

Thank you to everyone who came and said hi and thank you to my good, good friends at NBM who flew me out and made my weekend at the table truly memorable. 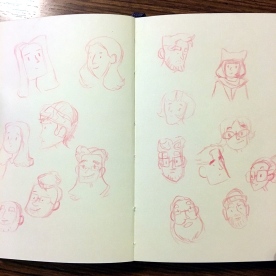 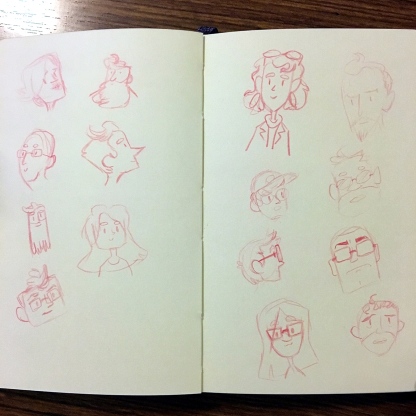