Our cat Toto has died, well over eighteen years old. For us at-home-working, childfree artists, out cats have always been much more than just pets to us – they are life companions… 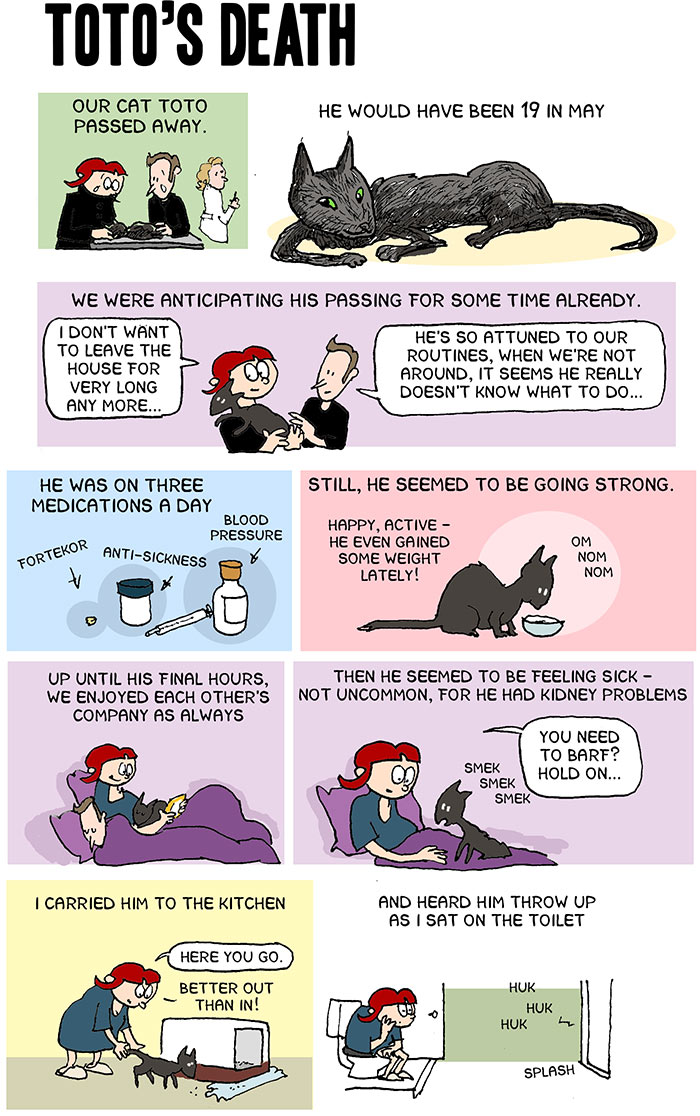 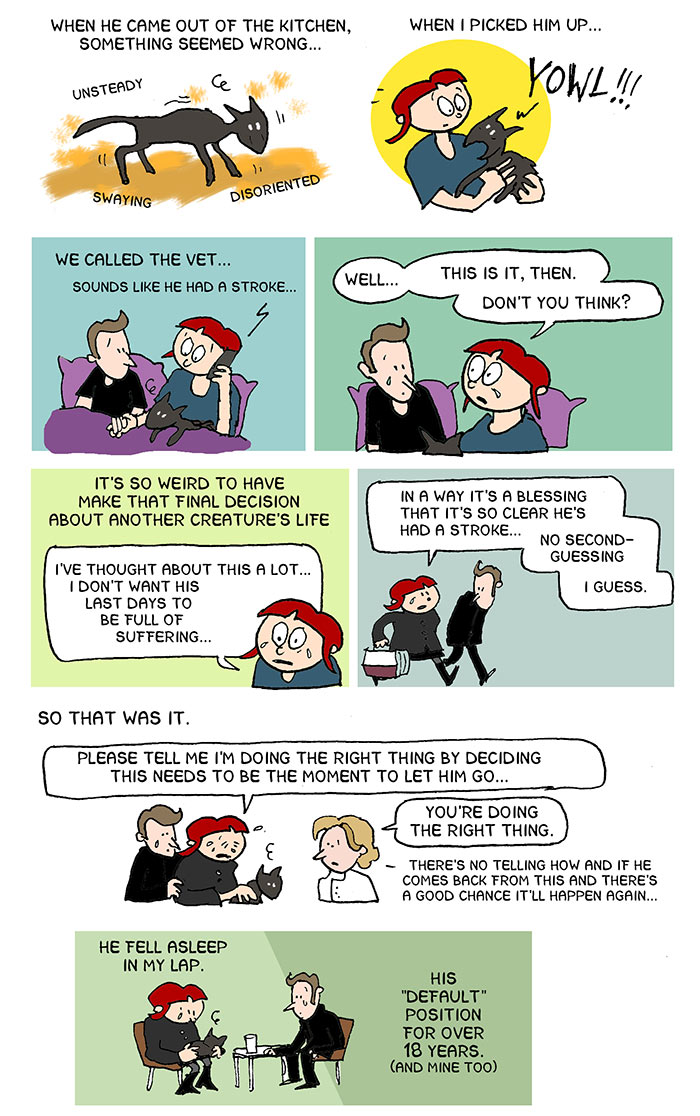 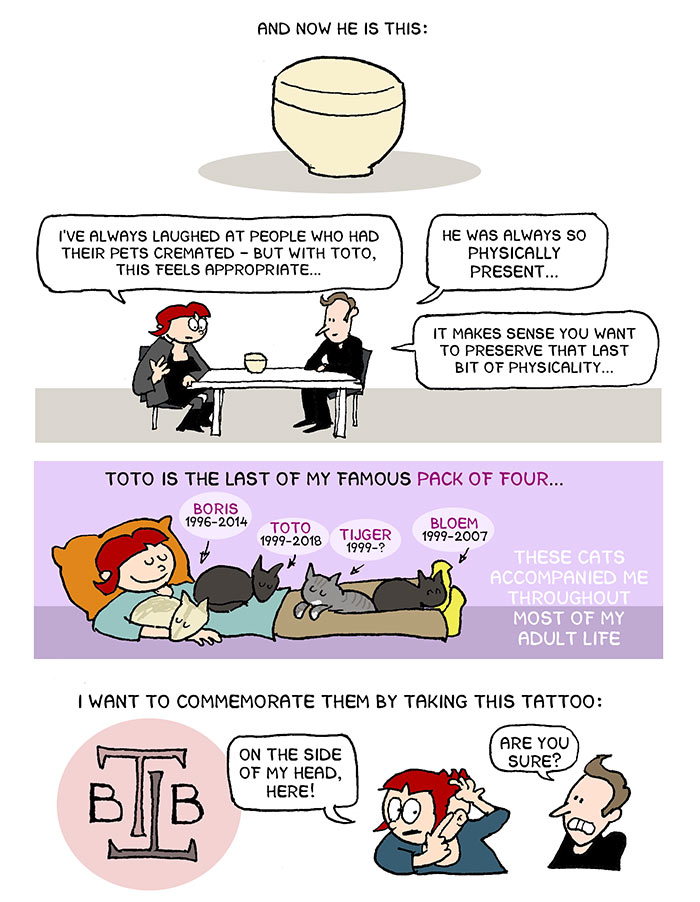 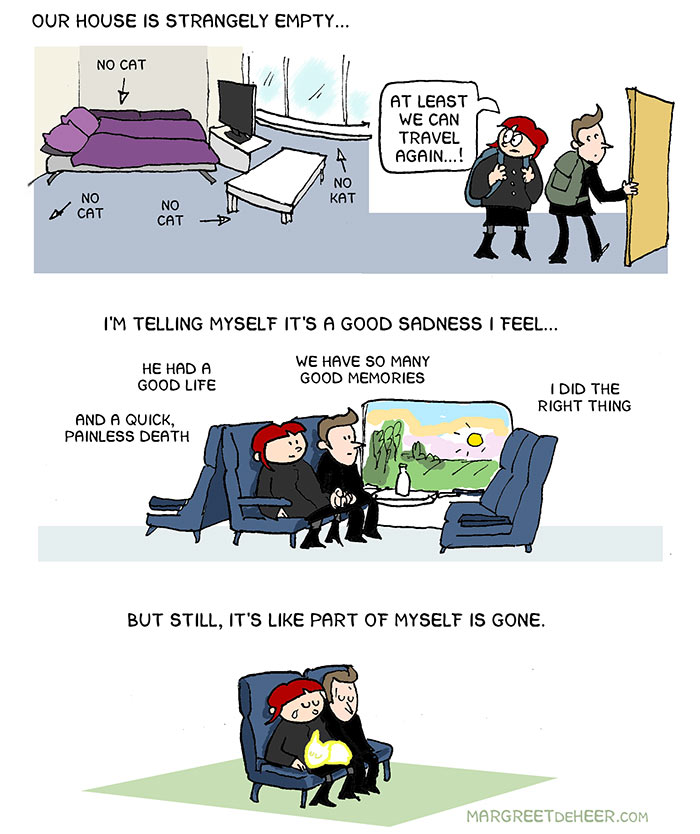 Our cats have always found their way into our work. Here’s the last drawing of Toto in the Discovery-series (the book about Love, to be released at a later date by NMB):

I have not been very active online these past weeks – no blogs, no webcomics even – and the reason is the news of the death of the man I was in a relationship with from 1997 until about 2002. I met him when I was 24 and he was 60 years old – yes, that’s some age gap, but that isn’t the most controversial thing. He was an extraordinary person: ex-legionnaire, talented author, energetic bon-vivant and, alas, the cause of the death of his second wife in 1991, in the tragic culmination of a marriage turned bitter. The story of his crime has become the most widely known thing about him, and I regret that.

There was so much more to him.

Since he was a bit of a notorious figure, the Dutch media reported his death widely and of course this elicits comments from people who knew him, think they knew him, or did not know him at all. Some of the stories that emerge are true, others are total rubbish. It’s so weird to read these things about someone you know so well, almost as if total strangers come unbidden into your living room and start yelling random insults – it’s both frightening and infuriating.

But it’s nothing in comparison to the public avalanche about his person some fifteen years ago, one in which I personally got caught up because I was his girlfriend. I did get involved with the press then, just to get my story out, and learned the hard way that it’s much better for my equilibrium not to. So eventually our relationship became something I never talked about, and that was okay. He and I knew what we had had, and that was enough.

But now he’s dead, and I feel loss and grief and an inability to express it.

I loved this man. What we had was good. His crime stood not in the way of us loving each other. I always felt safe with him, and he went out of his way to take the best care of me. When I think about us, I smile: yes, we were a weird couple, but the affection and passion we had were deep and genuine, and even after we broke up we still held a soft spot for each other.

I think it’s important I say this publicly. Not only for myself, but to convey to the world that things are never that black and white. That there’s more to a person than just the things he did wrong. That love can be a real thing even when there’s vast differences in age and background.

It was during our time together that I started drawing comics. At one point I thought my debut would be a graphic novel about us, but I abandoned this plan when I realized how much that would brand me as “the girlfriend of a killer”, a label that certainly would have hindered me as I embarked on my comics career.

Still, that’s over a hundred comics pages just lying around, gathering dust. Now seems the perfect time to show some of them.

So here’s the condensed version of the life of Richard K., up until 2001: 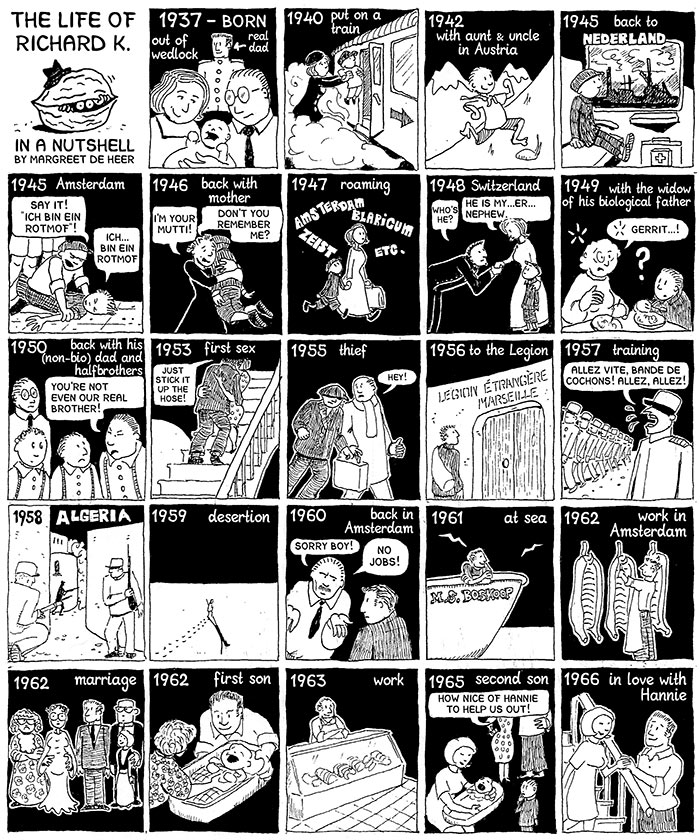 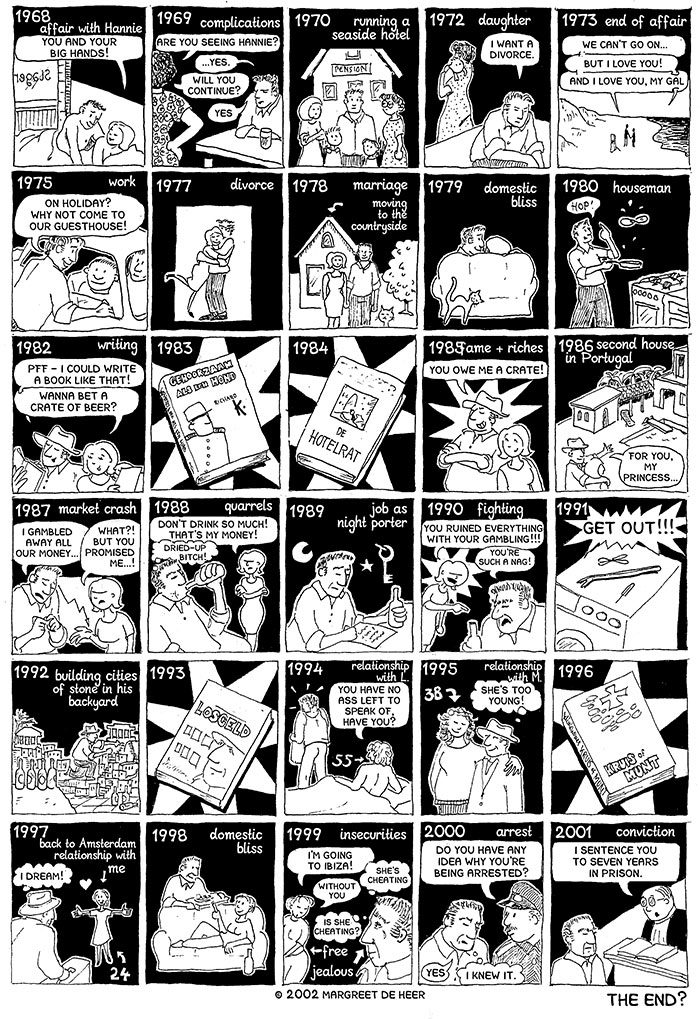 This layout is inspired by Joe Matt, especially his early comics in Peepshow. I liked the “in a nutshell”-concept, the black and white grid and how much you can fit into it.

We corresponded a lot when he was in jail, and this is a letter he wrote to me in 2002, and which I turned into a comic. It’s a lovely letter, it shows so well how linguistically versatile he was, and it’s also a rather nice love letter, touching humorously upon our issues of flirtatiousness and jealousy and also, I think, expressing much tender fondness between us. I know he displayed this comic on a wall in his house up until the day he died: 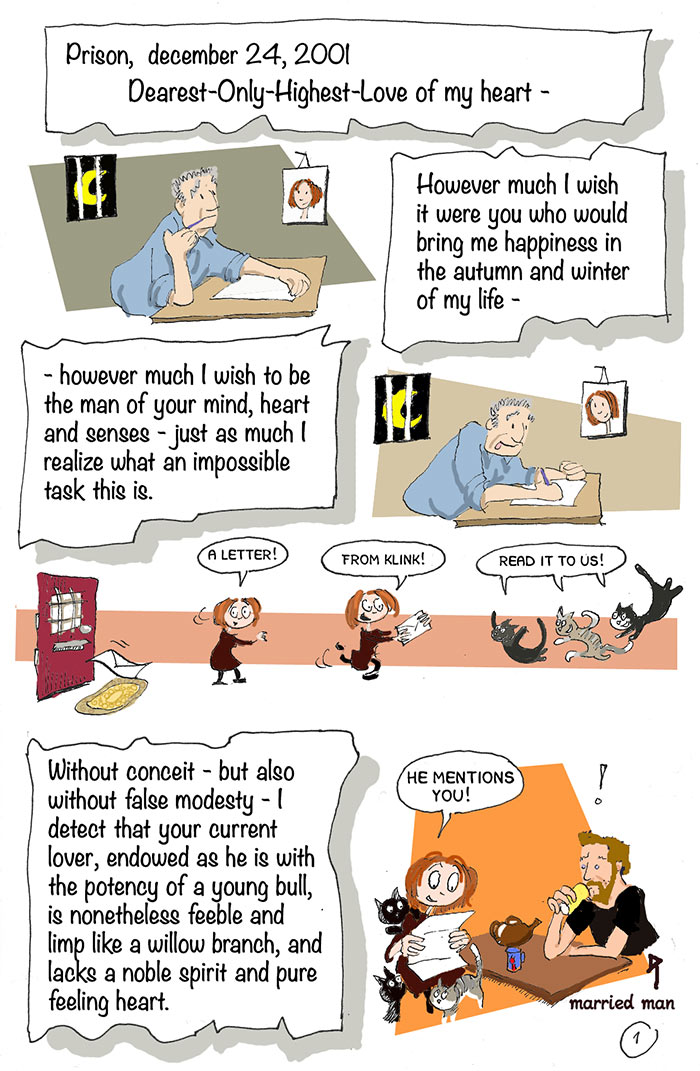 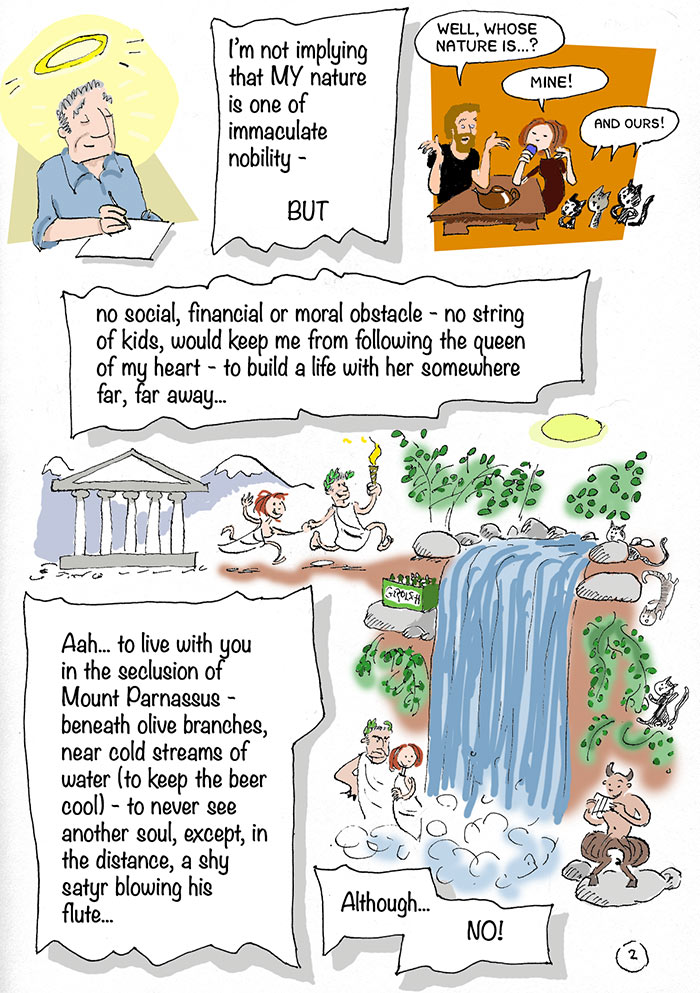 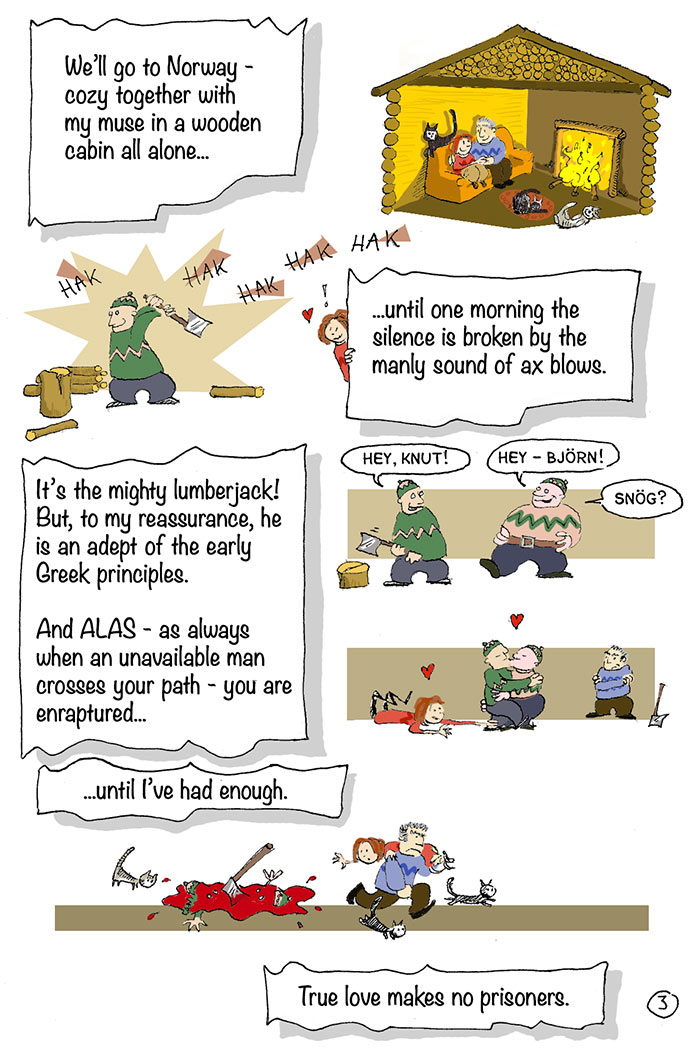 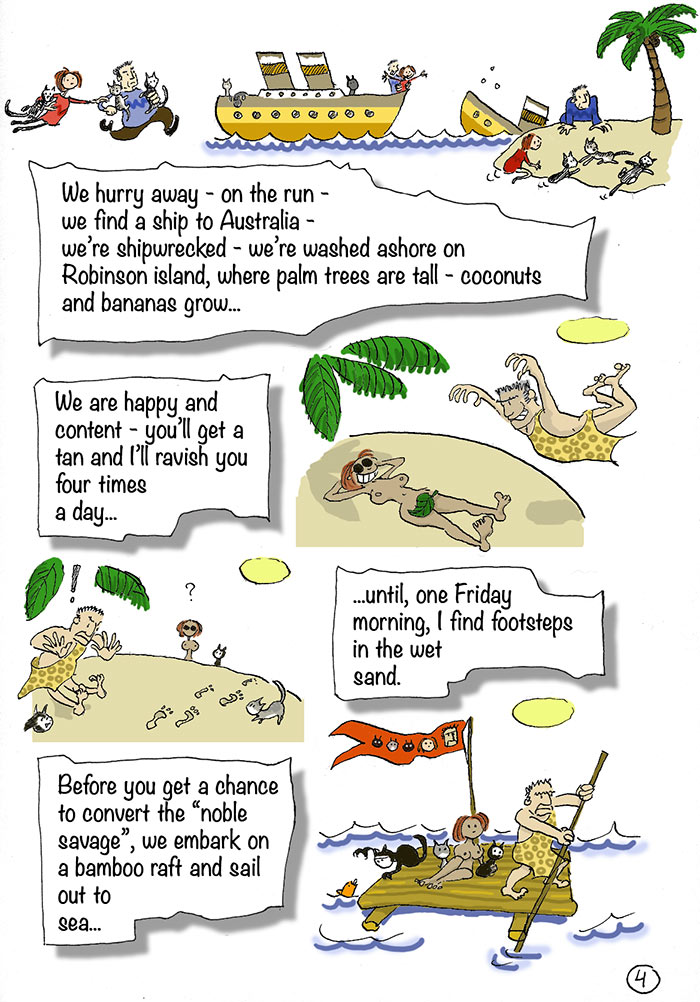 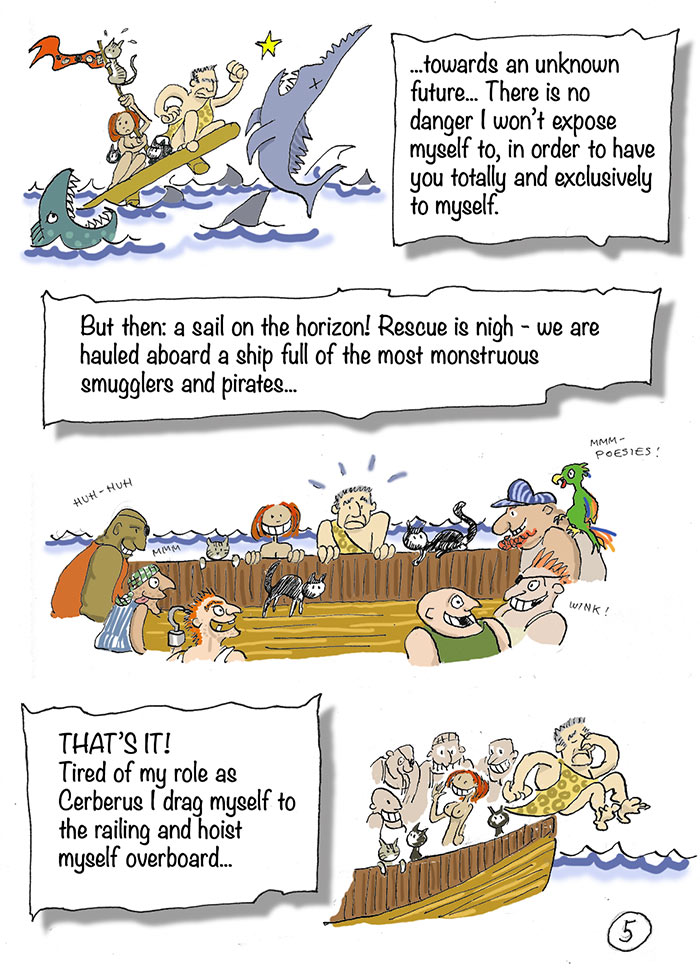 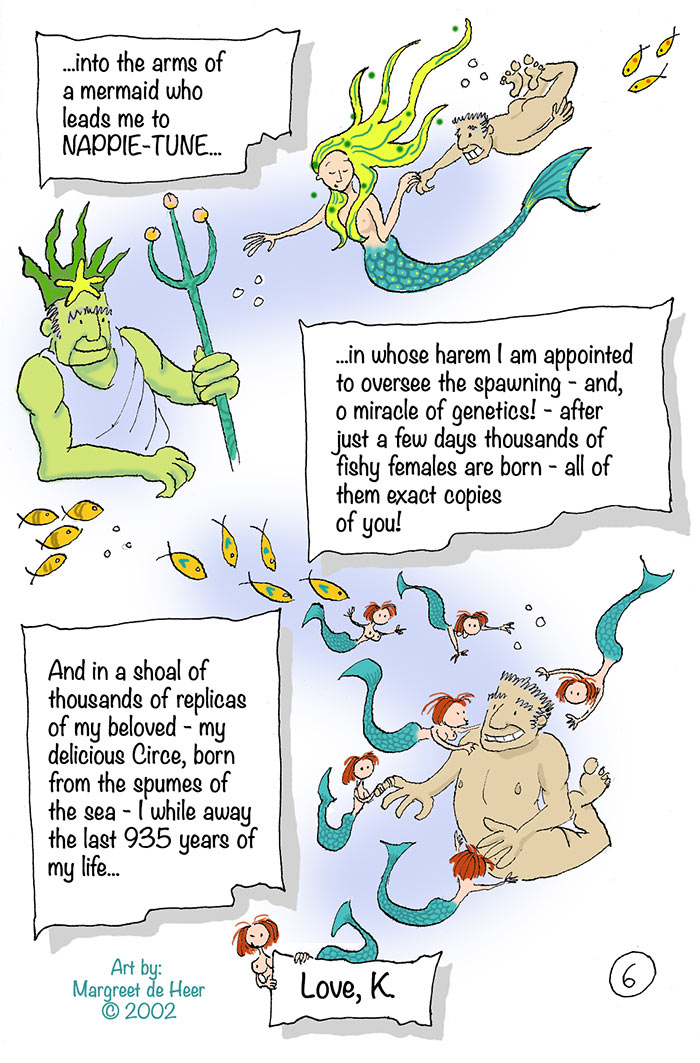 He also makes an appearance in my book Philosophy: a Discovery in Comics, as “Gerrit, an old family friend” – explaining how Nietzsche’s work has influenced his life: 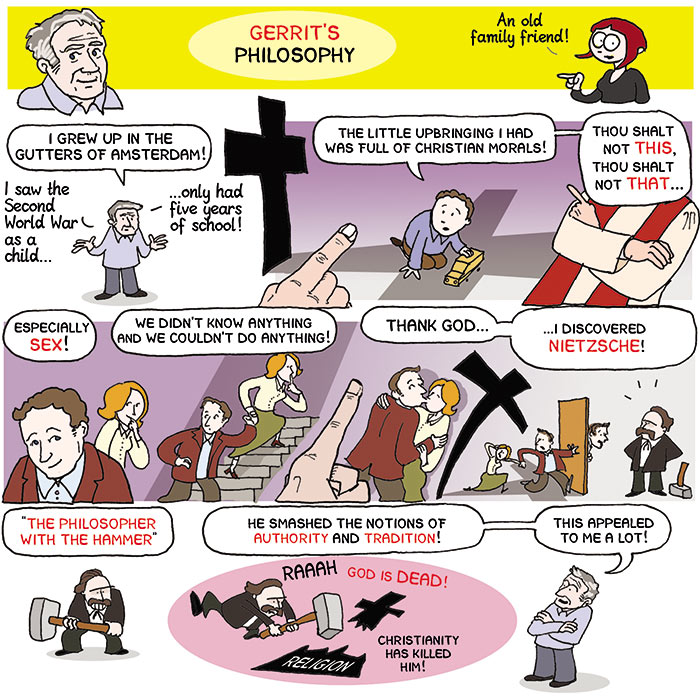 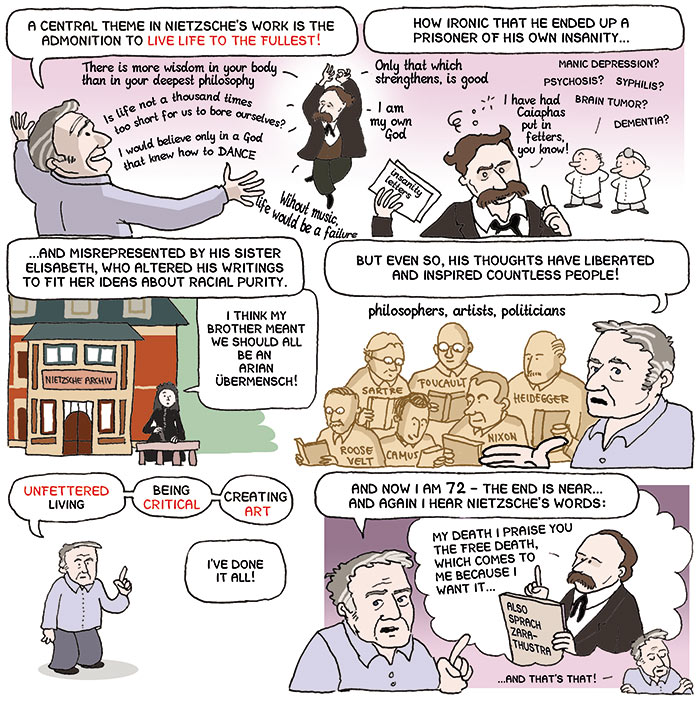 Rest in peace, dear Richard K., my Klink – although I doubt that your vivacious spirit will have much use for eternal rest. May you live on forever in Dutch literary mythology for the whole person that you were – and let it be known that you were loved.

Two weeks ago our beautiful sweet Siamese Boris died. We miss him greatly, not just as a pet but as a friend who always seemed so tuned in to our moods and feelings. He was almost eighteen and had a great life and a good death – yet this does not make the sadness any less, only “cleaner” perhaps, since there are no regrets. 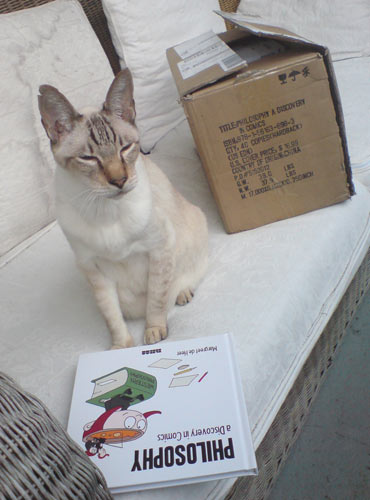 Apart from all the “usual” mourning, I have an additional, specific problem. Boris was also a character in our books – a mostly silent one but still part of most of our backgrounds. (I blogged about the cats in my books two years ago, here).

We’re about halfway working on our next book and of course Boris has made his appearance. So what do I do, do I keep drawing him? Or do I just drop him from my pictures? Do I need to address his absence in any way, and how can I do that without distracting from the theme of the book? (which is World Power, something most cats have little interest in)

After pondering it for a while, I came up with this solution, in the first panel of a chapter in which I discuss the progress of the book with my brother:

That’s Yiri holding Boris’ picture next to what I call my “deity drawer”, a small cupboard for incense, some god statuettes and assorted spiritual books. It’s also the place where I put pictures of the dearly departed. (The deity drawer is featured in my book about Religion)

It is addressed. Boris gets his place among the legendary mortal supporting comics characters.

And we will have to face the problems of the world without him from now on – quite literally in our lives but also in our books.

Sleep well, dear Boris, you will live on in our hearts. 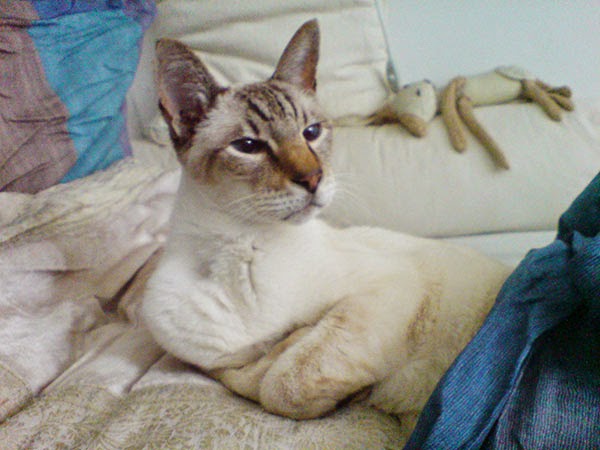