Throughout May, Amazon Kindle/ComiXology will have several digital titles on sale for just $2.99 each!

THE BEATLES IN COMICS! By Michels Mabel and Various

Here’s the complete illustrated story of the Beatles from their formation, through the Beatlemania phenom all the way through their breakup. We see how they evolved along with and amplifying the uproar of the sixties, became politically and socially active and have achieved a lasting impact unparalleled in pop music. Chapters combine text and comics for complete information presented in a fun way.

When the repulsively ugly Coddie unintentionally saves a fairy from a spell, she does not understand the poisonous nature of the wish granted her by the fairy. The village folk no longer see her as repulsive and stinking of fish—they now perceive her as magnetically beautiful—which does not help her in her village.

A young local lord saves her, but it soon becomes apparent that Coddie’s destiny may be far greater than anyone ever imagined. Caustic and flamboyant, this fairy tale offers grownups an engrossing take on the nature of beauty.

In 1930s Paris, the “Butcher of the Dances” is on the prowl for young, loose women, and local dominatrix Agatha suddenly turns up dead. Everyone assumes it was suicide, but her sister Blanche is convinced that the Butcher is responsible. She decides to take matters into her own hands, and in her pursuit, she ends up hired into a luxury house of call-girls. She soon becomes adept at certain practices, but she does not lose sight of her ultimate goal—to find her sister’s killer. A suspenseful spicy tale as only the French could so lightly get away with, this work is deceptive in its depth and realism.

THE LINDBERGH CHILD: AMERICA’S HERO AND THE CRIME OF THE CENTURY by Rick Geary

Geary’s Treasury of Victorian Murder moves onto the XXth century with one of the most sensationalistic cases ever!

All was well for Charles Lindbergh, after his daring solo crossing of the Atlantic. Fame and fortune came quickly as well as marriage into a wealthy family. But soon after they build themselves their dream home far from the madding crowd, tragedy strikes: their baby is abducted! Geary retraces all the different highly publicized events, blackmail notes, false and otherwise, as well as the string of colorful characters wanting to ‘help,’ some of which actually successfully snookered the beleaguered hero.

A fascinating story, of course without a fully satisfactory conclusion, replete with savory details and unsavory people as only Geary can masterfully relate with his understated dark humor.

DOG BUTTS AND LOVE. AND STUFF LIKE THAT. AND CATS.
Cartoons by Jim Benton

Bestselling cartoonist Jim Benton of It’s Happy Bunny and Dear Dumb Diary fame has also been posting whimsical, dry humored, at times nasty, cartoons on Reddit. They have become one of the site’s most popular items.

At last, here is a collection all in one place! From wry observation of the absurdities of life to acerbic comment, to poetic musings, from cats and dogs to humans, from one size to another, one style to another, this compendium will amaze as to the breadth of Benton’s inexhaustible talent for humor.

Here are upcoming titles, now being solicited in comics stores through Diamond Previews for an November 2019 release.

You too can be a detective! Solve these morbidly funny puzzles where on one page you are presented the crime scene where poor Kenny is assassinated, the next page gives you the answer! How much of an ace are you? How observant are you? A cross between South Park humor and Where’s Waldo (for adults). Collected from the Instagram sensation with hundreds of thousands of followers worldwide. 45 cases to solve! Proven totally irresistible! In a fun little hardcover at a ‘pick-me-up’ price.

Dog Butts and Love. And Stuff Like That. And Cats.
Cartoons by Jim Benton

Bestselling cartoonist Jim Benton of It’s Happy Bunny and Dear Dumb Diary fame has also been posting whimsical, dry humored, at times nasty, cartoons on Reddit. They have become one of the site’s most popular items.

At last, here is a collection all in one place! From wry observation of the absurdities of life to acerbic comment, to poetic musings, from cats and dogs to humans, from one size to another, one style to another, this Eisner-nominated compendium will amaze as to the breadth of Benton’s inexhaustible talent for humor.

A Home For Mr. Easter
By Brooklyn Allen

By the co-creator of The Lumberjanes! You will love this crazy energetic book by a refreshing new talent!

Tesana has never really fit into anything before but her daydreams. But when making an attempt to connect to her peers by joining in a pep rally planning committee she suddenly discovers a little white rabbit that lays brightly colored eggs. Realizing that she may have found the real life Easter bunny, Tesana embarks on an epic quest in an effort to get him back to his natural habitat and into safe hands. However as she progresses on her fanciful journey she gains more and more undesired attention until the quest becomes an increasingly madcap race to stay ahead of greedy pursuers and find a safe place for her new friend…wherever that place may be. It’s Tesana against the world!

Bleeding Cool has named Street View as their pick for the Eisner Award for Best Publication Design stating that, “This book, like a jellyfish, has no spine. And I think it’s such a unique book because of it! Two different stories sandwiched together by two hard covers, spread out like a painted accordion, definitely provides a different reading experience. While I can foresee complications if not handled properly, I think the design is superb, and Rabate knew what he was doing while presenting it as a “wordless play.””

“The selections feel pretty representative of what you can find out there and there were quite a few I was not familiar with before.”

“Considering the staggering amount of collected comic art out there, this ongoing project deserves to be recognized.”

DOG BUTTS AND LOVE. AND STUFF LIKE THAT.  AND CATS.

Bleeding Cool has named Dog Butts and Love. And Stuff Like That. And Cats. as their pick for the Eisner Award for Best Humor Publication stating that, “I first became aware of Benton’s comics through Reddit, where he would constantly be upvoted to the front page with his latest comics. From there I eagerly awaited every update, and kept myself amused by browsing his archives. To have a collection of his best works available in one collection is a huge victory for humanity, for he has a talent for illustrating some truly laugh out loud stuff that tickles everyone’s funny bones. The fact he doesn’t rely on one style of illustration keeps things fresh, and makes him a chameleon in comics.”

“As with many of the Dungeon volumes, the two stories are illustrated by separate artists: Alfred and Mazan, neither of which was familiar to this reader. Their cartoony styles are close enough to not be distracting, though Mazan displays a slightly lighter hand. In a series like this, you need to be capable of drawing small comic character moments and fully-stuffed bloody battle sequences, and both artists are up to the task. Twisted heroic fantasy and funny animals – what’s not to like?”

“The most remarkable of this volume’s many strong points is the deft interlacing of satire with independent character and story development. Sly gags help to maintain the fresh take on Dungeons and Dragons fantasy environments while supporting the serious story…This volume is a strong recommendation to current fans, and the series represents a good next step for Adventure Time devotees looking for something equally snappy, but more adult.”

There is a refreshing quality to this illustrated presentation that invites the viewer to ruminate over the actions of the players and to question the intentions of the participants. The stories can be viewed as morning events when read in one direction, whereas the opposite route portrays the evening proceedings. A range of emotions seem to foment as the viewer writes a script for the activities depending on the interpretation—is there love or hate, innocence or crime, fun or mischief? The scaffolding is there, but the script is in the mind of the viewer.

Dog Butts and Love. And Stuff Like That. And Cats. 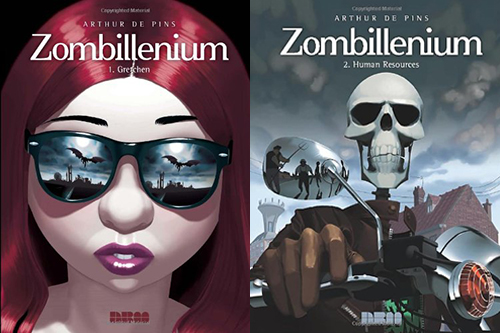 “Arthur de Pins has a crisp, clean style of drawing that I like, and these books looked like they would provide as much humor as horror…The plots are outlandish, of course, and play on many familiar horror tropes, but there was a lot of bloody, good fun in the telling.”

We’ve done well this year, most notably achieving 50% growth in the general trade (general bookstores, libraries, Amazon, and such)! We’re up significantly overall with such successes as Beauty and All Star being warmly received and going back to press rapidly but also with Bilal’s entry in the Louvre collection (we have some major names coming up for this series, stay tuned!) and Jim Benton’s snarky collection Dog Butts and Love. And Stuff like That. And Cats.

But we’ve also been building a reliable backlist, as we call it in publishing, with such perennial sellers as Zombillenium (#3 out next summer), The Discovery in Comics series (Religion is next, Fall ’15!), the comeback of Dungeon, the Louvre collection and many authors, European and American.

Well, goodbye to an excellent 2014 where, thanks to you, NBM turned a significant corner and is on the up and here’s to an even better 2015 for all!

This is the latest edition in our long running collectible print offer.  Jim Benton (Dog Butts and Love. And Stuff Like That. And Cats), Rick Geary (A Treasury of Murder), Margreet de Heer ( A Discovery in Comics series), Stan Mack ( Taxes,  The Tea Party, and those Revolting Rebels) prints are all available now! One print per order, while supplies last. To see the other prints and learn more about the offer visit our website.

This offer is available on phone orders and at conventions as well, make sure you ask for it when ordering!

Here’s what critics have been saying about our releases:

All Star by Jesse Lonergan

“I really enjoy the clean and simple lines of All Star’s art. Lonergan doesn’t spend time showing off how great he is by taking attention away from the story. Every line, every shadow, and every face servers a purpose and that purpose is to tell a story. And, the story is a thing of beauty.”

Dog Butts and Love. And Stuff Like That. And Cats. Cartoons by Jim Benton

“The pieces in question range from single-panel gags to short sequential pieces, but the thing they share in common is the level of intelligence and cleverness on display. He is consistently darkly funny, often touching a chord with a tough truth at the heart of the cartoon…It’s a damn-near perfect encapsulation of the entitlement generation. The whole book is worth your time.”

“The humor is a mix of subtle and in your face, is frequently laugh out loud funny and often surprising.”

“It was marvelously entertaining, because Benton is obviously insane, or insanely creative…genuinely original and very entertaining, which was a welcome surprise.”

“Fiendishly delightful, twisted, surprising, and even a little tragic.”

“I love this series! A comedy paranormal spoof with a serious plot makes it total fun!” 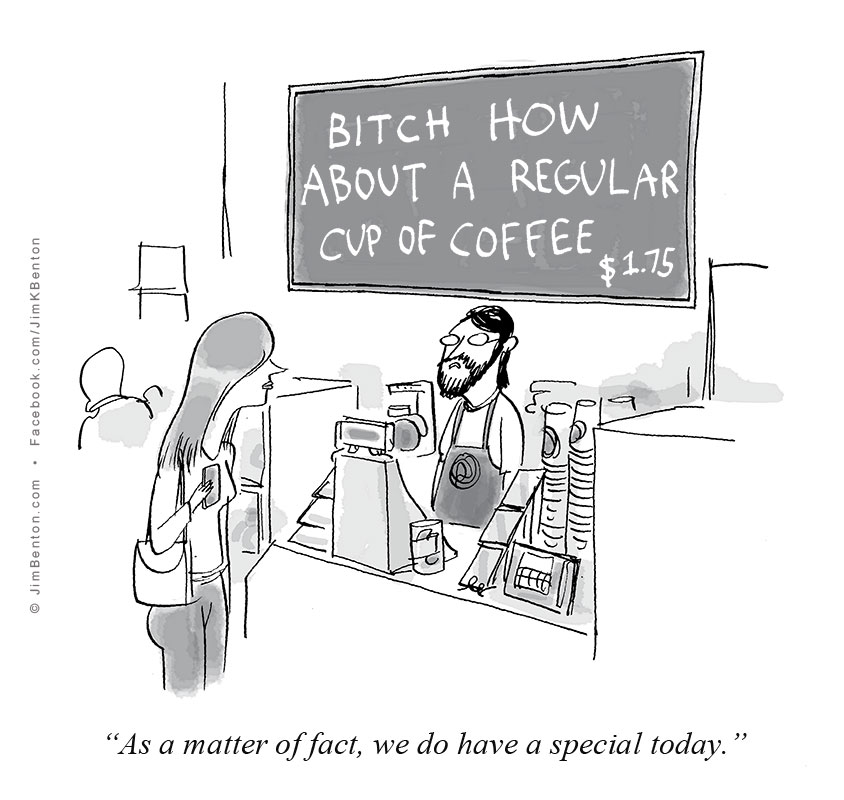