Not too far back I wrote about my first experience with Inktober. To sum up: it was a big deal for me! Drawing and posting one picture a day completely changed the way I work and, by extension, my life.

So when Inktober 2017 came around, I was totally and completely ready for it. For the theme, I thought it’d be cool to do what I did last year and draw every character from the video game Overwatch. So I did! 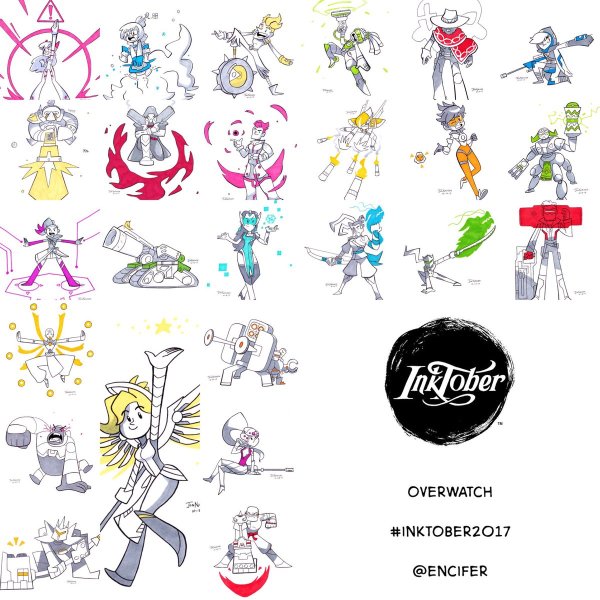 Compared to last year’s drawings, I think I improved quite a bit!

I’m a cartoonist, primarily. I write and tell stories. Or, at least, that’s what I aspire to. However, I’ve lately been distracted from my storytelling by trying to become what I call a “popular internet artist type person.” I even made business cards!

But let’s back up to January 2016. I had just wrapped up my webcomic of eight years in an effort to get away from gag-a-day comics and focus entirely on more longform storytelling. I wanted my next graphic novel to be a short story compilation, so that’s where I put all of my energy.

Comics can take a while to produce, and in between short story releases, I always had little to say or show to my followers on social media. I’d post a few in-progress shots every now and then, sure, but they were few and far between. Once the comic was finally done and online, there’d be a sudden burst of “I made a thing! I made a thing! Everyone look! I made a thing!” and then it’s back to radio silence as I begin work on the next comic. But not just radio silence from me, silence from everyone. The comics I had been working on for weeks and weeks were getting little to no attention.

This was exceedingly frustrating for me.

I work for weeks, sometimes months, on a project, release it into the wild, receive some gratification here and there, and then nothing. I realize that that’s not exactly a new problem — the difficulty of being noticed as a classic struggle for artists throughout the ages — but something needed to change. I wasn’t seeing the growth I was hoping to see, especially considering how much work I was putting into these comics and what I left behind in order to pursue this new direction in my life.

It was a huge bummer! I was still proud of my work — I felt that each story was better than the last — but I began to question if I had made the right decision. If this new path that I had set myself on was the right one.

And then Inktober 2016 happened. Inktober is a yearly event created by Jake Parker that encourages artists of all skill levels to simply make a pen and ink drawing every day for a month. If you’ve heard of national novel writing month, this is similar. I always missed it every year, but this time I had just bought some new pens that I was eager to try out and they just happened to come in the mail on the first day of Inktober.

So I gave it a shot! I was still working on my big comic projects, but every night I’d start with a quick Inktober drawing and post it online. All of a sudden, when before my social media posts were at times weeks or months apart, my Twitter and Facebook followers were being updated with new drawings every single day.

In addition to the new skills and discipline I learned from drawing every day in a format I was inexperienced in, the effect on my social media networks was astounding and practically immediate. The number of people that liked and followed my work grew and grew. It turns out that posting daily content is a great way to build an audience! Who knew?

I was finally seeing growth. My work was slowly but steadily getting more attention and I was building relationships with some pretty rad people that I never would have met otherwise. It felt like everything suddenly made sense. I’m not the most social person and I had never put the work into building my social media presence, so why was I so surprised when I tweeted about my comics and got little to no response? In my attempt at focusing entirely on my comics, I had neglected my chosen medium for publishing those comics.

I didn’t stop my daily doodles after Inktober ended, and I don’t plan to any time soon. Does doing them take a chunk away from my already incredibly limited time? Yes, to some extent my comic output might have suffered a bit, but in the long run I believe it will be worth it. Building and sustaining a following that truly cares about me and my work far outweighs any time I’ve lost drawing my next graphic novel. Now when I release a new comic, I actually get more of a response from the small yet formidable audience I’ve managed to build. I cannot emphasize enough how much better of a place I am in now, both personally and artistically.

And I’m having fun drawing again! My drawing time has traditionally always been dedicated to projects and work and, as strange as it may sound, drawing purely for fun is actually a fairly new experience for me. Over the past few months I’ve produced the best work I’ve ever done and I’ve been having a blast the entire time.

And it’s all because I started a challenge to draw every day.

Thanks again to Jake Parker’s #inktober for being awesome and turning my life around. You can check out his work here. Thank you for reading and I’ll see you all on Monday when we’ll be talking about time and the ever-present dread it holds over us all!