One of the first images that came to mind when I was conceiving of this story was that of an Indian warrior, at the end of the battle, holding one of the 7thcavalry banners aloft and screaming to the sky that they’d won the day. 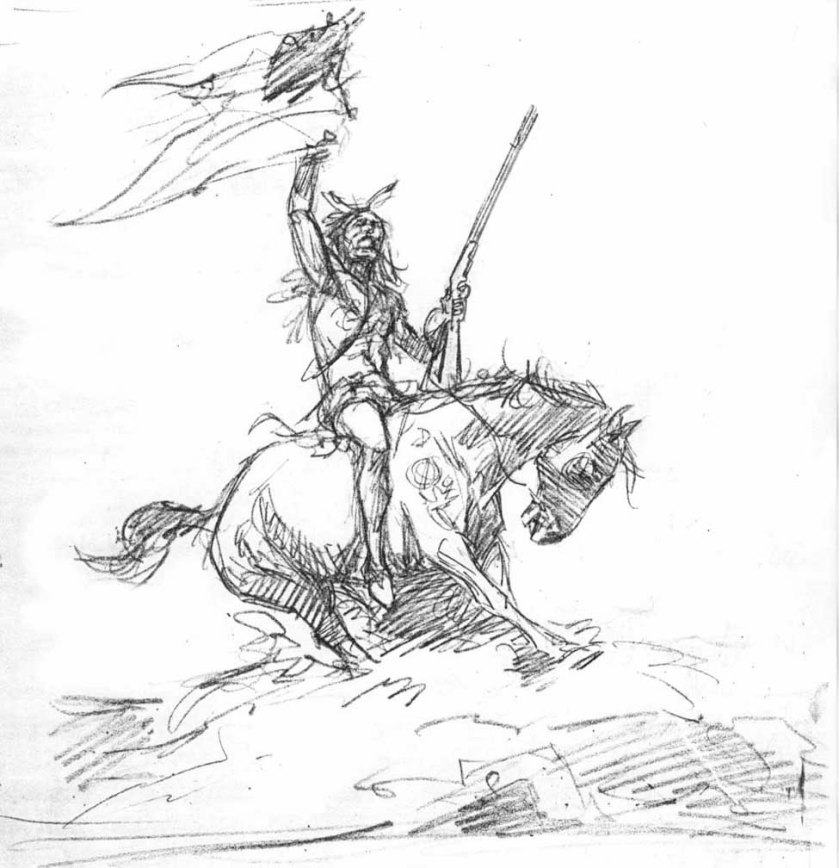 The horse was abandoned because it made the image too vertical and our book featured a landscape format. So Val reworked it as a horizontal image.

Clearly, this image is loaded with meaning, but we imagined this warrior as one of a proud band who faced extermination, fought back, and won a battle, even if it were just for the moment. 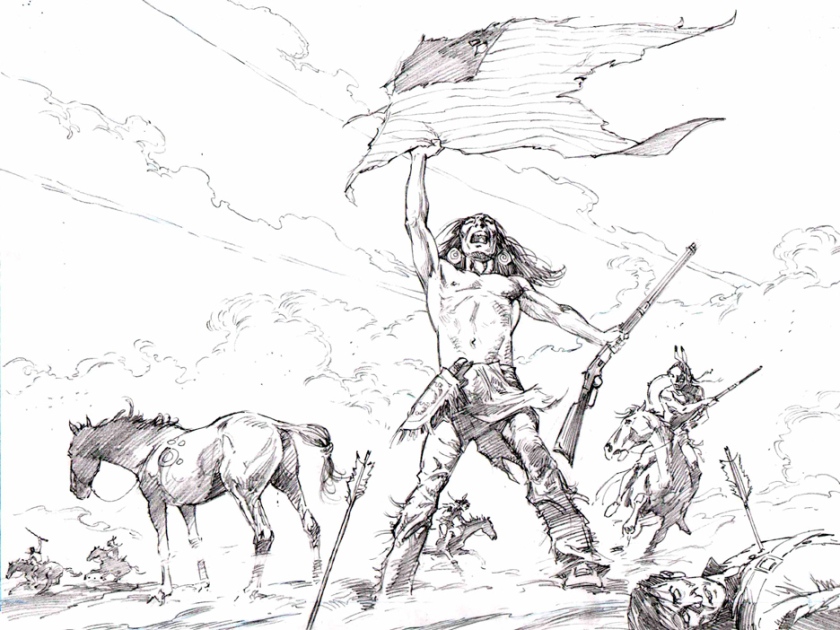 Final inks by Val below. 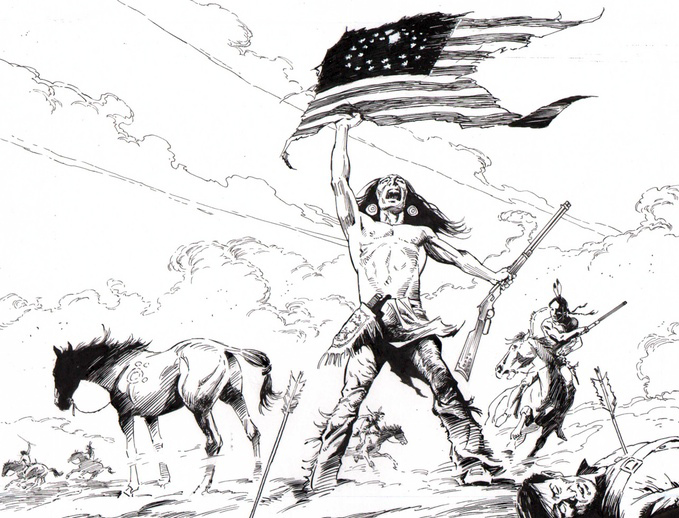 I’ve been working in the comics business for a long time; I’ve attended many conventions and met countless fans. I found them all to be great people and I certainly have appreciated their support and fondness for my work. Only three times though have I met a fan with whom I felt possessed an affinity for creating and the temperament for collaboration, in other words, someone I could work with. Jim was one of those guys. Our first project was a short film which made sense as I had a background in acting and Jim’s background was in film making. It was a humble project but successful in its own way.

Some time went by and we talked of doing something else but nothing was coming to mind at least not for me. Then Jim proposed Dust and Blood. At first I was a bit taken aback by the scale of the project; all I could see was me slaving over panel after panel, page after page of hundreds of figures in expansive battle scenarios. Crowd scenes have never been my forte. But as we discussed the story, I realized that like any other graphic novel or comic this story was multi-faceted and would be working from various perspectives so there would be a great deal of variation in what needed to be illustrated.

I also had to come to terms with this being a “Western” and how I was going (if I could) to expand on that motif. As a kid I read very few western or cowboy comics. I never read the ones that were original titles such as Kid Colt and others of that type. I mostly read comic book adaptations of existing TV westerns such as Laramie. Bonanza or Gunsmoke. I don’t remember much about them and don’t know as I particularly enjoyed them other than seeing if the artist captured the likeness of the TV actor.

Many years later when I got into the business I discovered a lot of the better European and Latin American artist who illustrated some outstanding wild west stories. There was the French artist Giroux (later to be known as Mobius) and his work on Lieutenant Blueberry and the American artist Doug Wildey and his Rio series. I was pretty confident that I could deliver a book of that quality with the art and I knew Jim had already risen to the occasion with the story content.

I already had a large repertoire of drawing reference in my head of horses and weapons of the Old West so I had confidence in that area. Some scant research on Custer’s uniform and the landscapes in and around the Little Big Horn and I would be ready to go. I just hoped I could add a dimension of patina or a bit of antiquing of style that would give a bit of depth to the final art. I still don’t know if I succeeded in doing that.

Growing up in the 70s, I hunted Marvel and DC comics off the racks of the local pharmacy as well as the treasure troves of garage sales, flea markets, and book exchanges where you could swap a handful of change for an armload of books . . . Back then, the discoveries were endless and with no internet database to comb through, everything was a surprising discovery of vast importance . . .

Val Mayerik’s books were some of the best, Creatures On The Loose, Ka-Zar, Savage Tales, and Fear, where he drew The Man-Thing and introduced the world (in collaboration with Steve Gerber) to Howard The Duck – and Supernatural Thrillers where he drew my personal favorite, N’Kantu, The Living Mummy.

I met Val at a comic convention in Portland, Oregon around 2006, intent on producing a graphic novel about Ignaz Semmelweis, the Hungarian obstetrician who connected the deaths of new mothers to the dirty hands of their doctors. Val took a commission to produce a cover (below) which spawned a collaboration that has included a short film, a handful of pitches, and our book, Of Dust And Blood.

Why a book about a famous clash between Native Americans and Custer’s 7th Cavalry? The first and most important answer is that it is an incredible story, layered, rife with compelling characters, pathos, and historical significance. Ultimately, it is transfixing in its drama and is still hotly debated to this day.

Also, simply, I wanted to work with Val and, over the years, I came to appreciate what was interesting to him as an artist. He is a historian with a deep understanding of The Indian Wars of the late 19th century and a love of western art. He also came to the book as a horse owner, someone with a respect for the relationship between horse and human. His perspective is on full display in the book and he does a masterful job of depicting that unique bond.

Originally Of Dust And Blood was published as a result of a successful Kickstarter project from 2013. Check it out here.

Lots of images and info if you are so interested.