In addition, we’re reprinting two important titles to the history of the company. The Mercenary by Vicente Segrelles was the first fully painted fantasy series when it was originally released in the mid-Eighties and one of NBM’s best selling series, will be reprinted in it’s entirety with 14 volumes released on a quarterly basis, in handsome keepsake quarterbound editions with breathtaking reproduction overseen by Segrelles himself.

Also being reissued is the fully painted Streak of Chalk by Miguelanxo Prado, which not only inaugurated NBM’s Comics Lit line, but also was recognized for elevating graphic narrative storytelling when it was originally released in 1994.

For some he was the philosopher of existentialism, for others the constant provocateur, the politically engaged author, the uncertain militant, the repenting bourgeois, the life companion of Simone de Beauvoir… From his first readings in the Luxembourg Garden to his refusal of the Nobel Prize for Literature, Jean Paul Sartre was all of this at the same time.

On the occasion of NBM’s 40th anniversary, this Eisner and Harvey Award Nominee classic is back in print! A small streak of an island in the Atlantic. On no map. In heavy summer heat. One general store with a woman and her taciturn boy. A lighthouse with no light. Memories and messages graffitied on the pier wall. A chance encounter with a beautiful elusive woman. A Murder. Or was it? Nothing seems completely real. Only the graffitied memories are constant.

A mysterious multifaceted novel steeped in magical realism that can be read a number of ways, Streak of Chalk is one of Spain’s best comics authors’ magnum opus, and one of the greatest most pioneering graphic novels NBM ever published. 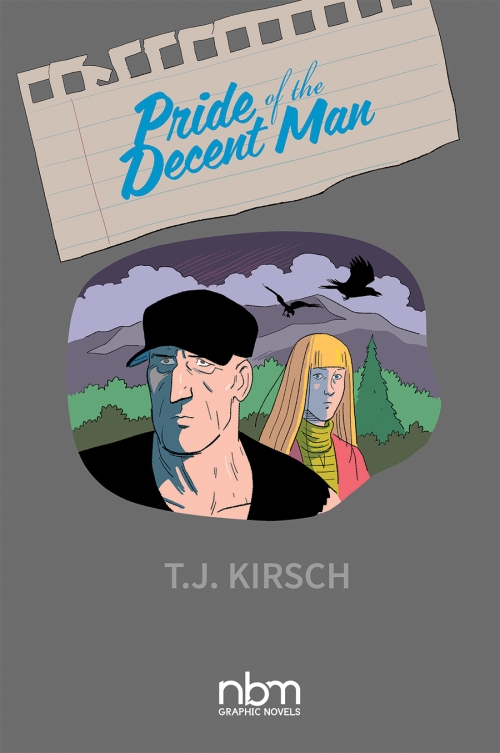 In a sleepy New England town, Andrew Peters is born into an abusive family. As he grows older, he seems to be on the right track, using writing as his outlet – but his best friend Whitey is always around pulling him in the opposite direction. Andrew eventually lands himself in prison, and shortly thereafter, learns he has a daughter. The shock resolves him to a path of redemption and an attempt to live his life as a decent man. 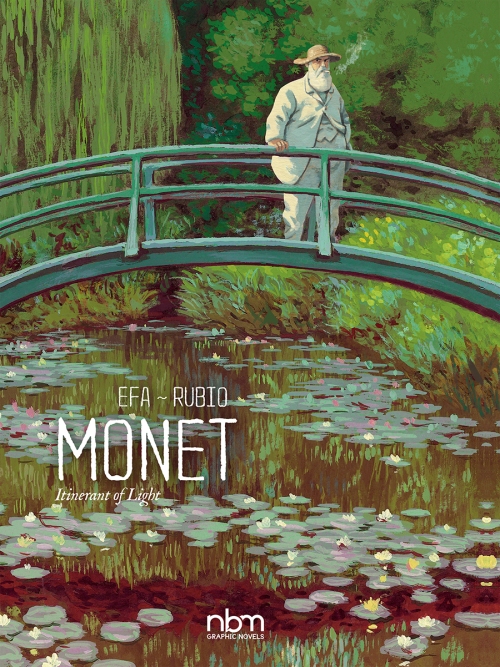 The life of the great French painter, one of the founders of Impressionism, is narrated in lush comic art reminiscent of his style. From the Salon des Refuses (“Salon of the Rejected”) and many struggling years without recognition, money and yet a family to raise, all the way to great success, critically and financially, Monet pursued insistently one vision: catching the light in painting, refusing to compromise on this ethereal pursuit. It cost him dearly but he was a beacon for his contemporaries. We discover in this comics biography how he came to this vision as well as his turbulent life pursuing it.

THE MERCENARY The Definitive Editions
Vol.1 The Cult of the Sacred Fire
Vicente Segrelles 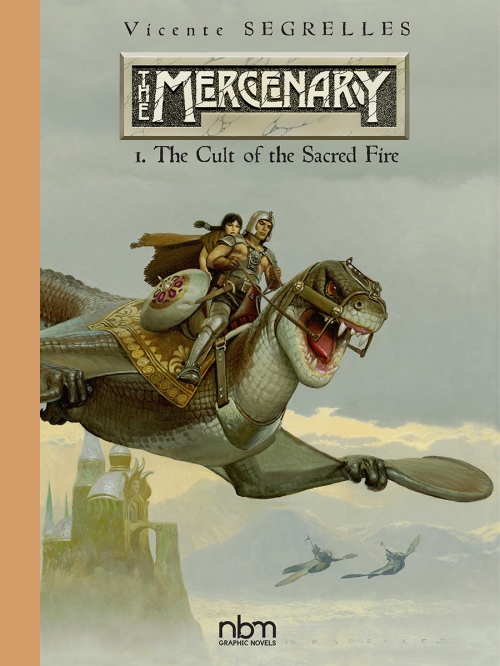 On the occasion of its 40th anniversary, NBM is proud to bring back one of its bestselling series ever, amongst the world’s first highly realistic fully painted comics. Brought back in even better reproduction than ever with all-new scans of the original paintings overseen by the master himself and presented in handsome large quarterbound collectors editions. Each panel could be a painting on your wall! These volumes will take your breath away.

In a lost and long forgotten valley high up in the mountains, The Mercenary has been contracted to save a woman from the mysterious and powerful Cult of the Sacred Fire! Each volume is complemented with articles at the back about the history and the making of this series over its gloried decades-long history. 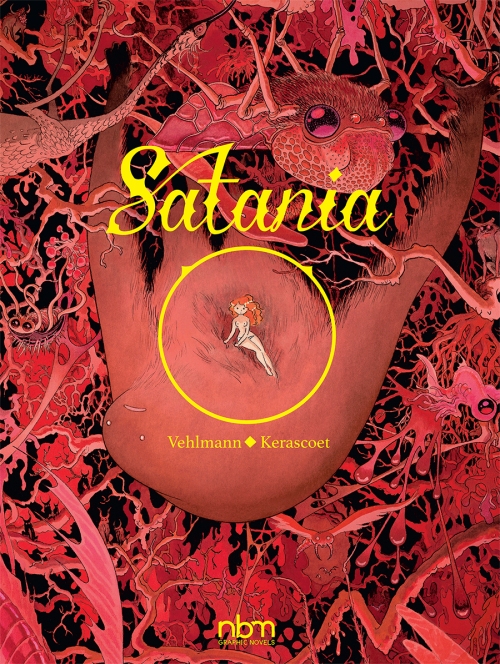 Charlotte – aka Charlie – a pretty redhead, sets up an expedition to find her brother. The young scientist, who disappeared underground several months ago, claimed – to everyone’s astonishment – to be able to prove the existence of Hell by using Darwin’s theory of evolution! The little group, led by Charlie, plunge underground in his pursuit. The deeper they progress into the entrails of our planet, the more they enter another world that hides other forms of life heretofore never experienced. The discovery changes them gradually in a way they cannot perceive…

“Another sumptuously illustrated adventure into horror by the creators of Beautiful Darkness.”

KERASCOET SET
Including Beauty and Miss Don’t Touch Me

In Beauty, When Coddie unintentionally delivers a fairy from a spell that held her prisoner, she does not realize how poisoned the wish is she gets in return. From repulsive and stinking of fish she becomes perceived as magnetically beautiful, which does not help her in her village. A young local lord saves her but soon it becomes apparent her destiny may be far greater.

In Miss Don’t Touch Me, The ‘Butcher of the Dances’ is on the prowl for young loose women. Blanche works as a maid along with the only family she knows, her sister, fun-loving Agatha. Suddenly, Blanche loses her to what she saw was murder but others only write off as suicide. She decides to take matters into her own hands.

A TREASURY OF VICTORIAN MURDER COMPENDIUM I Paperback Edition
Including Jack The Ripper, The Beast of Chicago and The Fatal Bullet
Rick Geary

In this first omnibus volume from Geary’s increasingly storied Treasuries of Murder: the first trilogy of murders that made up the very first volume of this series, Jack the Ripper as only he can narrate it, The Beast of Chicago about H.H. Holmes, possibly the first serial murderer with chilling methodical means and The Fatal Bullet about the assassination of president James Garfield.

Based on his own experience, Pedrosa narrates this return to his roots in a deeply compelling and warmly human way. This is his bestselling graphic novel with over 100,000 copies sold in France and a winner of many prizes including Best Graphic Novel at the Angouleme Festival and FNAC Best GN.

THE MERCENARY The Definitive Editions
Vol. 2 The Formula
Vicente Segrelles

Continuing the full reprint of the classic series in breathtaking reproduction and handsome keepsake quarterbound editions. The graphic novel series that set comics on a new path!

The Mercenary embarks on one of his most perilous journeys ever as he tries to stop an unscrupulous alchemist who has stolen a highly dangerous mysterious formula.

Each volume is complemented with articles at the back about the history and the making of this series over its gloried decades-long history.

David becomes increasingly more desperate, with his extreme behaviour causing fights with everyone who cares for him: with the devilish Mr Black and the saintly Mr White and even with his loving parents. But his quest goes on, driving him to break the rest of the 10 commandments in order to draw out the elusive divinity to face a grief stricken man. Until, finally, he is faced with the most serious commandment all: ‘Thou shalt not kill.’

Will he do it? Or will God stop him? 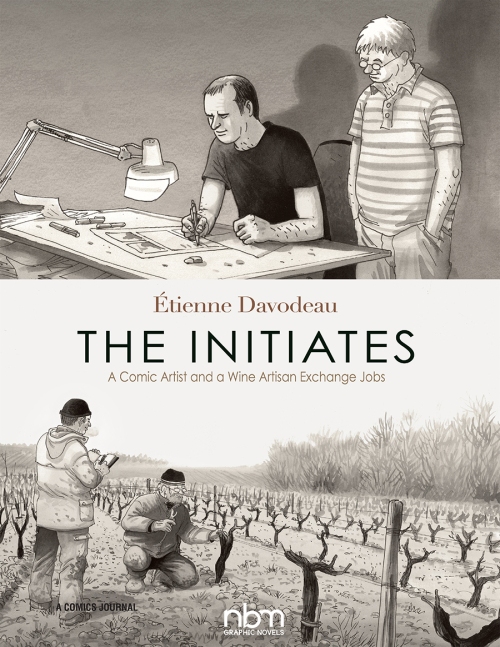 The sold out hardcover now in paperback. Etienne Davodeau is a comic artist. He doesn’t know much about the world of wine-making.

Richard Leroy is a wine-maker. He’s rarely even read comics.

But these two are full of good will and curiosity. Why do we choose to spend one’s life writing and creating comics or producing wine? How and for whom do we do them?

To answer these questions, for more than a year, Etienne went to work in Richard’s vineyards and cellar. Richard, in return, leapt into the world of comics. They opened a lot of bottles and read many comics. They traveled around, meeting authors and wine-makers sharing their passion for their jobs.

The first time a book explores the nature of a man’s vocation with a true life representation of it from two very different perspectives. They get to realize they both have that precious and necessary power to bring people together.

THE TRUE DEATH OF BILLY THE KID
Rick Geary 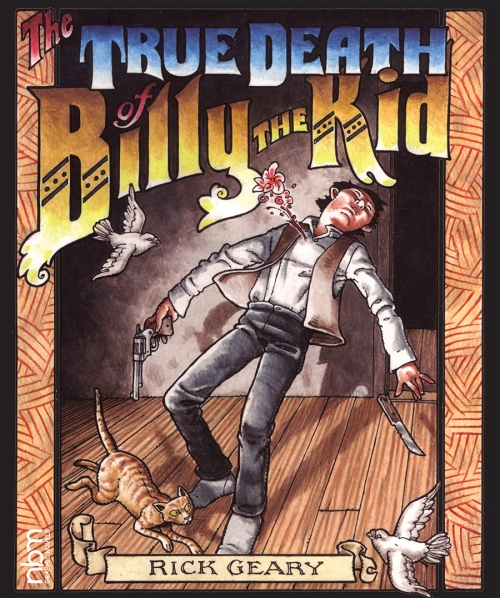 ‘Being an authentic narrative of the final days in Billy the Kid’s brief and turbulent life.’ One of our folk legends of the great Wild West, William H. Bonney went from cowboy and gunslinger for a rancher to pure outlawry forever dodging justice in New Mexico when it wasn’t even a state. On the one hand, he was charming, fun-loving –often at social events like dances-, quite appealing to the ladies. Also conversant in Spanish, “Billito” was popular with the Spanish speaking crowd. On the other hand, he had no compunction to coldly kill a man, a sheriff, a deputy, anyone who got in his way rustling cattle or horses for an illicit living. He also proved hard to keep in jail even when caught.

It is probably his feats of derring-do escaping from jails that made him most famous and this is the main subject of this biography following him until he is shot in pitch darkness by lawmen obsessed with getting rid of him.

George Khoury has posted a great interview of the wonderful Spanish artist Miguelanxo Prado on Comic Book Resources by whom we’ve published quite a few books over the years. Besides his remarkable comics, Prado went on to put a touch of class into the animated version of Men in Black.

I still love his Streak of Chalk and if pressed, probably would put it in my top ten GNs of all time. Can’t wait to see that new GN he’s cooking up now, it’s been a while!

When you go over to our Prado page, you’ll see all his books can be had for free with an order of 4 other books, btw.