Hello out there in blog land! If you’re reading this, chances are you’re interested in Willie Nelson: A Graphic History from NBM. Chances are also good that you’re maybe interested in the people that worked on the project. Well, today… is your lucky day! T.J. Kirsch ( that’s ME ) was recorded having a wonderful conversation about that project for the Vodka O’Clock Podcast this past week. Amber, the host of VOC, went in depth with T.J ( ME ) about his beginnings in comics, in secondary schooling, his experience as a literary agent, his previous book Pride Of The Decent Man ( NBM ), and more!

Click here and crank up your podcast listening device – whatever that may be – and take the journey. You’ll be enlightened, possibly distracted from doing those dishes, or that commute to that grocery store you love so much.

On Wednesday, October 7, 2020 at 6:30 PM, WILLIE NELSON: A GRAPHIC HISTORY writer T.J. Kirsch will be doing a live video Q&A with the fine people from Fantom Comics. Mark your calendars, and be ready with your questions!

“We’re doing another comic creator event for your enjoyment. We’ll be talking to cartoonist T.J. Kirsch about his work; in particular about his newest project Willie Nelson: A Graphic History, in which he teams up with several other artists to tell the story of this country music icon from Hill County, Texas.

T.J. Kirsch is also the creator of Pride Of The Decent Man, a story with an episodic plot about a man from an abusive household who tries to lead a straight and narrow path, and his friend who always pulls him in the opposite direction and into significant trouble.

If you would like either of these books, please contact us at FantomHQ@fantomcomics.com or call during business hours at (202)-241-6498.“

Early in the pitching and proposal process of Willie Nelson: A Graphic History, the plan was to do every part of the book myself – the writing, drawing, and everything that goes along with that. It’s a daunting and intimidating thing imagining the work that will go into a project before you start it. In 2017 and 2018, the plan was still to do it all on my own. It wasn’t until really feeling truly overwhelmed by it all that I considered bringing collaborators into the mix. I spoke with Terry at NBM, and he suggested I bring in different artists for each chapter – similar to NBM’s recent Beatles biography. This seemed like a great idea to me for a few reasons, but getting to choose collaborators I admired and friends I’d made throughout my career seemed like a great benefit. I could also devote more of my time to writing the script. The rest is history! Graphic History, that is.

Here are some very early art pieces I worked on while developing the project. 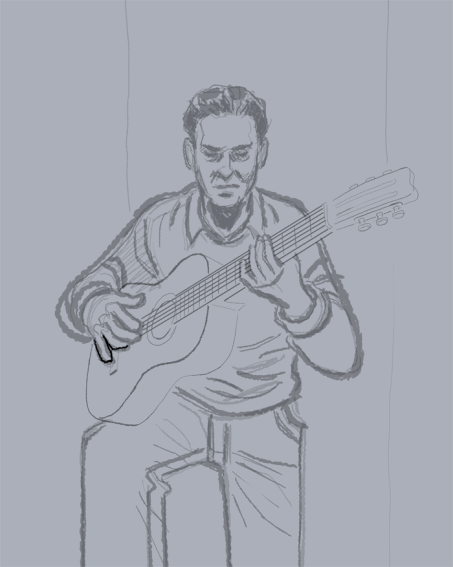 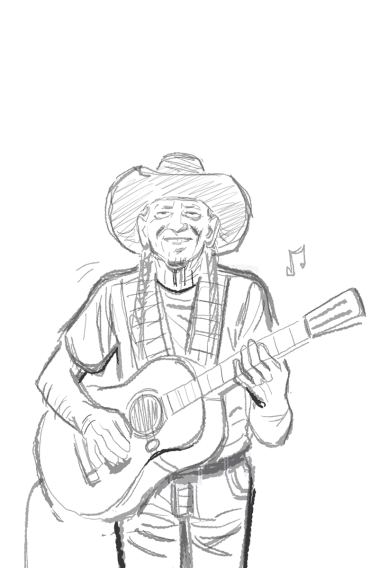 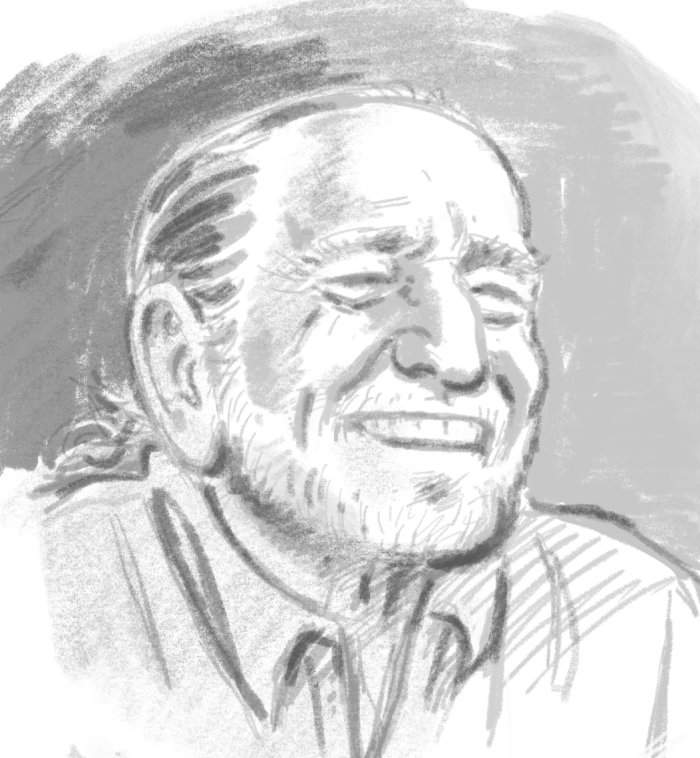 Willie Nelson, now living through a global pandemic at 87 years old, was born in Texas hill country in 1933. No one could’ve predicted the longevity of Willie’s music career, and the fact that he’d still be releasing new music at his advanced age. Yet this month, he released his 70th album, First Rose Of Spring – another collection of recordings produced by Willie’s longtime co-writer/collaborator Buddy Cannon. For someone who was born during the Depression, it’s amazing to think about also living through something as massive as the COVID-19 pandemic. There were many unforeseen cancellations for Willie this year as a result of the year’s events – Farm Aid, Willie’s  Fourth Of July Picnic, The Luck, Texas Reunion – that had to ultimately become virtual events. For a humble guitar picker that loves life ‘on the road,’ that can’t be an easy adjustment – to shelter in place, to not interact with fans and audiences one on one – that’s just not as fun. It can’t be an easy adjustment for someone that’s spent three quarters of a century performing for live audiences. Luckily, for Willie, he’s able to continue to make music at home and ride out these uncertain times with his close knit family. We can’t wait to see him – and the family – on the road again. I have been working hard behind the scenes, as I often do, to make sure the books I create are of the highest quality in the land. That means plenty of post production, page formatting, art correcting, re-lettering, and general file handling. Very exciting stuff – some might say glamorous even.

Some time last year, when things were very different, I illustrated the cover for Willie Nelson: A Graphic History – you know, the book I haven’t been able to shut up about for the past (at least) two years? The very same book in which I edited, and partly illustrated? Yes, that’s the one. Well, the process for this particular piece was recorded in a digital program called Procreate, on a portable computer called an ‘iPad’ and with a writing instrument called an ‘Apple Pencil.’

As it turns out, you can watch the whole drawing process, in a sped-up timelapse sort of way. Pretty interesting to look back on. This is, of course, just the black and white line art – which was then colored in Photoshop. The typography on the cover was done in Adobe Illustrator. Are you asleep yet? Anyway here’s the link, right below here.

From the book’s description;

Since he was a child in Hill County, Texas, he has been writing and performing for adoring crowds. Though his mainstream success did not come until later in his life, he has been determined to take his unique sound and voice to the people even before he was a household name. There have been tragedies, missteps, IRS troubles, good times and bad along the way, but Willie continues to shine his positive outlook and project his humble voice out into the world. In this graphic novel biography, all the chapters represent a different era of his life and struggles – each illustrated by a unique indie comics talent.