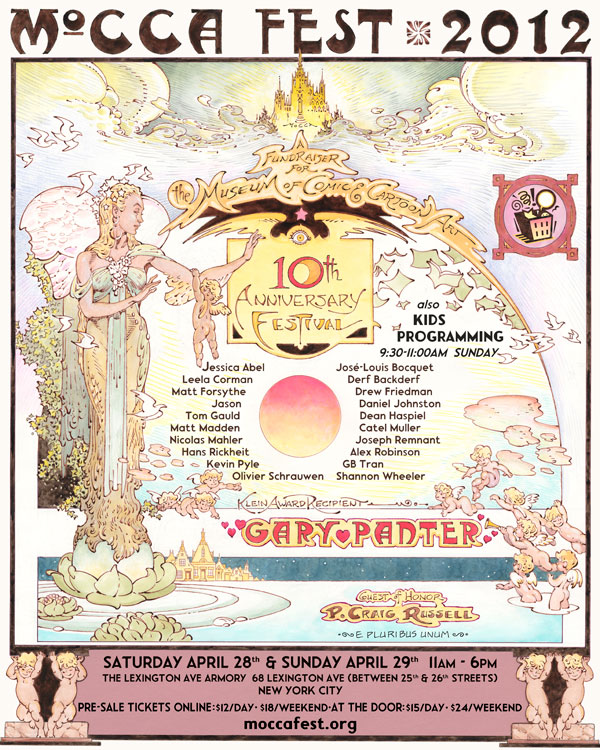 This weekend, is the 2012 MoCCA Fest and we’re pretty excited that our own P. Craig Russell (who did that stunning artwork above) is their very first Guest of Honor.

We’ll be debuting Craig’s new book, the eagerly anticipated fifth volume of The Fairy Tales of Oscar Wilde: The Happy Prince at the show, several weeks before it’s available anywhere else.

We’ll also have ten advance copies of the the signed and numbered edition of the book (How limited?  200 copies and the ten copies for sale will all be within the first twenty-five) which are quarterbound in real cloth and fine paper with a tip-in sheet signed by P. Craig Russell.  Also, it’s a tremendous opportunity to have Craig personalize your copy!

So come on by, meet some cool folks and celebrate comics!

Just back from SPX in the Washington DC area and it was energizing!

Saturday was amazing, starting right off the bat in high gear. For a few hours, we sold steadily books upon books, selling out of many Dungeon titles quickly as well as Sky Over the Louvre and Geary’s new Sacco & Vanzetti.

By the end of the show we had sold out of substantial quantities also of our premiere of the Stargazing Dog which was warmly received and, with Brooke Allen signing, of the many copies we brought of her Home for Mr. Easter.

The energy around the show is wonderful to see, the Ignatz Awards were SRO with many unable to fit and the post party went on into the wee hours. Gotta say, I love the forgiving hours of the show, starting at 11 on Saturday and even noon on Sunday.

A fun experience worth the trip and this show should attract attendees from farther than the DC area alone, it deserves it!

Many thanks to Brooke, Rick Parker who held up the Papercutz side, and Jesse Lonergan for appearing at our booth and talking with fans.

For the SPX Expo this weekend, come and meet us at tables G7-8. Here’s our schedule of artists appearing at our booth:

BROOKE A. ALLEN (A Home for Mr. Easter) will be at our booth throughout much of the show.

TED RALL (To Afghanistan & Back) is a bit tentative at this point in that he just returned from vacation finding Irene made quite a mess in his backyard, nothing major, but… if he can come, he’ll be appearing Saturday from 4-6, Sunday noon to 2.

RICK PARKER (with our sister co. Papercutz: Tales from the Crypt: Diary of a Stinky Dead Kid, Slices: Harry Potty and Breaking Down) Saturday noon to 2, Sunday 2 to 4.

Next week on the 10th and 11th is the annual Small Press Expo in Bethesda, in the Washington DC area and as every year, we’ll be there with some exciting new stuff!

The biggest news is we’ll be premiering right off press our first manga, the moving and inspiring Japanese best-seller Stargazing Dog. It’s sold over a half million copies in Japan and been made into a movie there just released this summer. See the preview of pages.

The other special we’ll have for the show is a preview of Ernie Colon’s Inner Sanctum with signed copies including a free signed sketch by Colon for the 1st 20 to buy!

Appearing at our booth:

Brooke A. Allen with A Home for Mr. Easter

We’ll have a good choice of recent books. Find us at G7-8, come say hello! Publisher Terry Nantier will be there and happy to chat with you.

If you’re coming to the MoCCA Show at the Armory on Lexington and 25th this weekend, make sure to stop by and say hi. We’ll have Twitter specials! Meet:

AND keep us on your Twitter radar as it were as we’ll be running show specials just for our Twitter followers!

NBM and Papercutz will be sharing a corner booth #2304 at the upcoming New York Comic-Con October 8-10 at the Javitts Convention Center. Upwards of 70,000 visitors are expected and we’ll have a busy booth of authors signing from both companies! Besides having our latest books to show and sell, here’s our schedule of appearances on authors you can meet which will include Neil Kleid of The Big Kahn and Brownsville, Greg Houston of Elephant Man and Vatican Hustle. On Papercutz‘ side, we’ll have Rick Parker and Stefan Petrucha who’ve done the best-selling Tales from the Crypt‘s Diary of a Stinky Dead Kid, the infamous new Harry Potty spoof, and Nancy Drew: