Often when it I’m in the middle of a story, and I’m getting low on paper, and I don’t want to venture out into the “wiggly-world”, I’ll grab a page of unfinished art that I have lying around and use the other side.

Here’s an example. This is page 120 from Dark Matter, before the final lettering was in place.

And on the other side of the above artwork is an unused page of art from the first chapter. These blue pencils are an earlier version of page 20.

And here’s the final version of page 20:

Next time more lost art retrieved from the jaws of those feisty grey aliens!

The title may seem dramatic but it’s true!

Tiny, chirping, grey aliens are all around my drawing board, causing little mishaps as I try to complete each page. They misplace my pencils, hide my ink, break my pen nibs, and steal perfectly good art work before I can finish it. They claim they’re being mischievous—like that character from the fifth dimension in a comic book that shall not be named. BUT, I know all of these lame tricks are part of an ongoing effort to stop us from revealing the truth behind what these aliens been really doing on our planet over the past 75-plus years!

But they will not succeed! Dark Matter, Book Four of The Silent Invasion graphic novel series will be released on October 19!

Here is the same page inked and lettered. You’ll see differences between the pencils and inks. Before inking I decided to change the viewpoint in some panels; and the design of the character operating the “mind-O-meter.”

The completed page. Grey “zip-a-tone-like” tones were added using photoshop. And for the sake of consistency, I re-lettered the story on the computer. But that my friends, is a story for another day.

Remember watch the skies! The aliens are coming!

We have finally completed the story and art for Dark Matter, the fourth volume in our graphic novel series The Silent Invasion. For those new to the series, Dark Matter continues the mis-adventures of the Sinkage family (in this volume, Walter Sinkage and his wife, Katie) as they get entangled with flying saucer sightings, UFO-based religious cults and a clandestine network of deep state agencies.

To whet your appetite for more here is the final cover to Dark Matter.

Next time we’ll have sketches, layouts, pencils and final art to preview.

Stay tuned and watch out for the little grey aliens! They’re coming to steal our minds if they haven’t already!

Lock your doors! Close the blinds! Bar your windows!

Hide your children and especially your pets!!

The little grey men from Proxima Centauri are coming for you, if they haven’t already taken you for a ride through the galaxy!

And while watching out for little grey or green men, look for Dark Matter, the fourth book in The Silent Invasion series coming this October from NBM. And, remember, if you see mysterious glowing lights in your back yard during the middle of the night — run and hide!

Watch the skies! They are here!

Dark Matter, Book Four of The Silent Invasion will be released this coming October. This tale of shadowy, out of control, international cabals weaving byzantine webs of deep state conspiracies, fear, and paranoia in an America that may be controlled by mysterious space aliens “continues” in an alternate-world 1970—five years after the “conclusion” of Abductions, the previous book in the series.

The jury is still out on whether The Silent Invasion is a documentary or just the addled ravings of a couple of comic book geeks from southern Ontario.

Here are a couple of finished pages from Chapter Two…

Until next time, stay safe and watch out for those little green men!

Presented in glorious black and white, Abductions is an escapist, fun-filled, paranoia-filled romp through 1965-era Union City in which private detective Phil Housley searches for Matt Sinkage—the man he thought he killed six years earlier (see Books One and Two of our series for more conspiracy-riddled tales from America’s fictional heartland).

Here’s a short sequence from Chapter Two of Abductions: 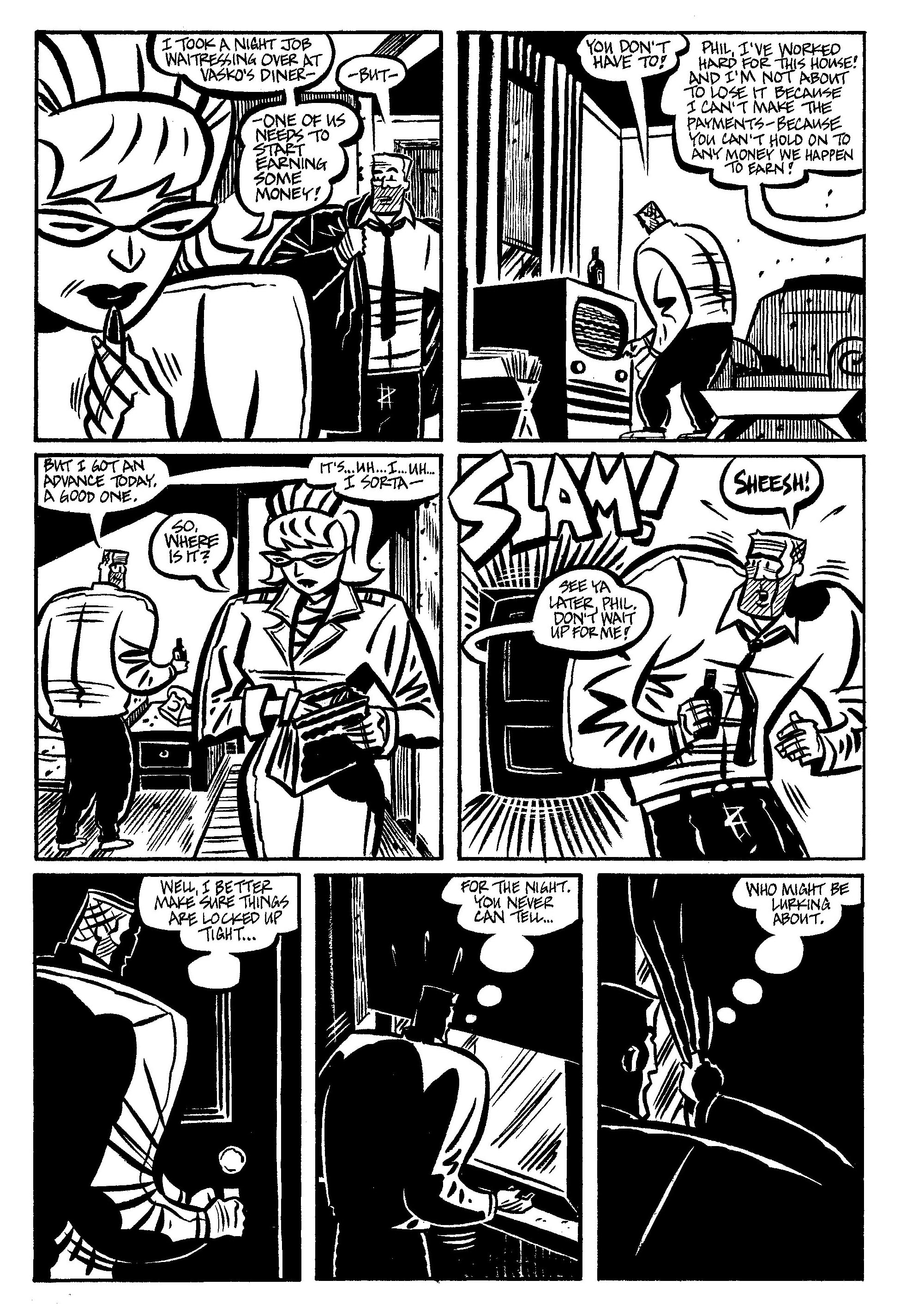 And then Phil Housley is mesmerized by the 25-yard end zones while watching a Canadian Football League game between the British Columbia Lions and the Hamilton Tiger-Cats:

And remember to watch the skies while you stay at home.

As you have most likely seen, the next volume of The Silent Invasion — Abductions — now has a new cover. And no this is not some sort of hoax or an alternate universe. 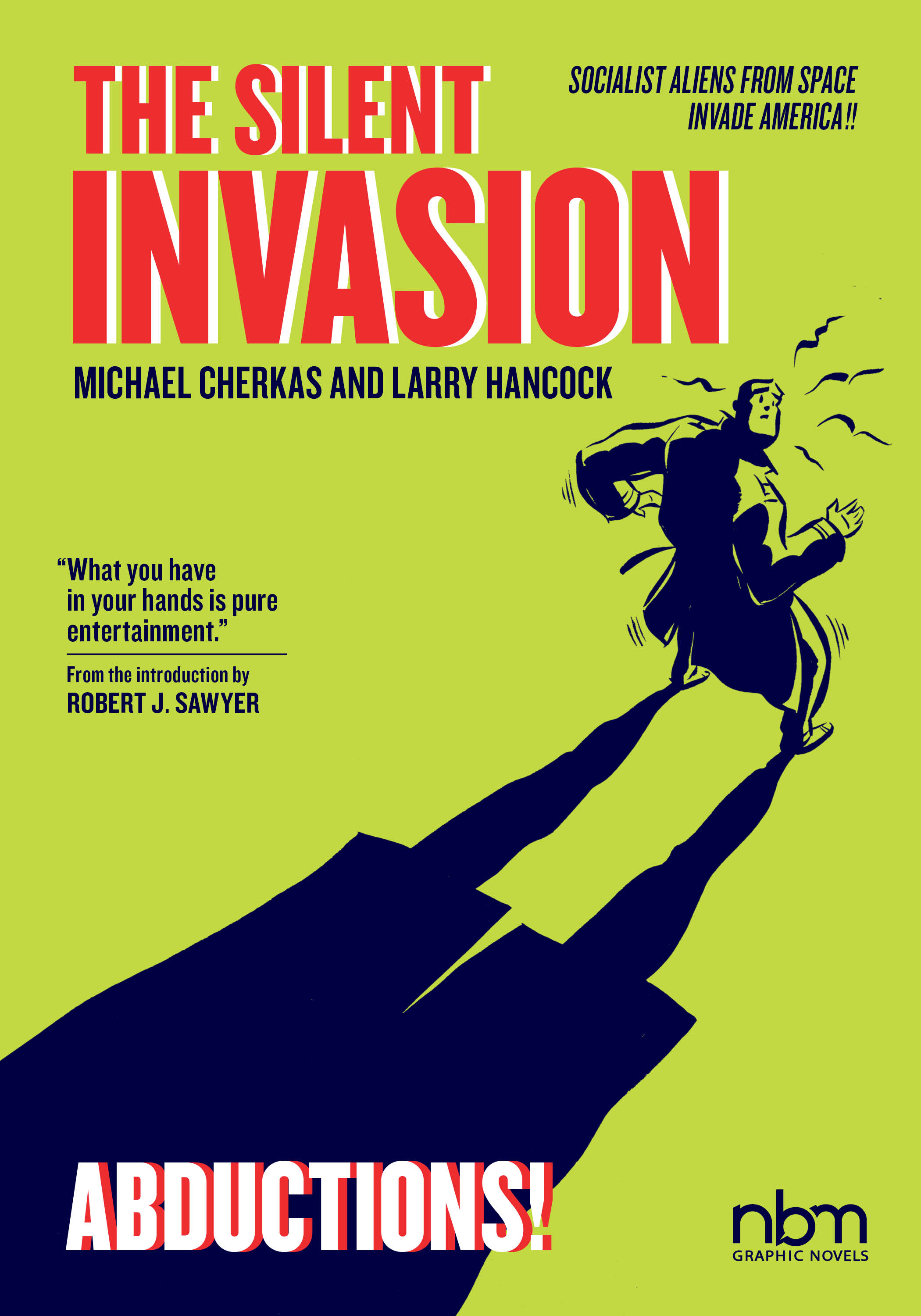 Actually what happened is this: I received a message from space — through a filling in a back molar — that the aliens did not want to be portrayed on the cover! It turns out that  they appear in different guises to different people. Some see them as little grey aliens; others as wisps of smoke; and others see them as tall robotic-like creatures. So we had to change the cover or risk abduction into deep space or a parallel world (Earth 2 maybe?).

The aliens also suggested showing a few development sketches for the new cover. Here they are…

The Silent Invasion: Abductions is coming in May.

Watch the skies! The aliens are out there! And listen to your molars!

Perk Up Readers! Don’t let the Paranoia, Alien Encounters, Lies or the Mad Conspiracies of the Oligarchy get you Down! It’s Christmas!

While searching through the disorganized archives of The Silent Invasion we found this Christmas-themed cover from the sixth-issue of the Caliber reprints, published in a far distant past—a past that today almost feels like it was an alternate reality. 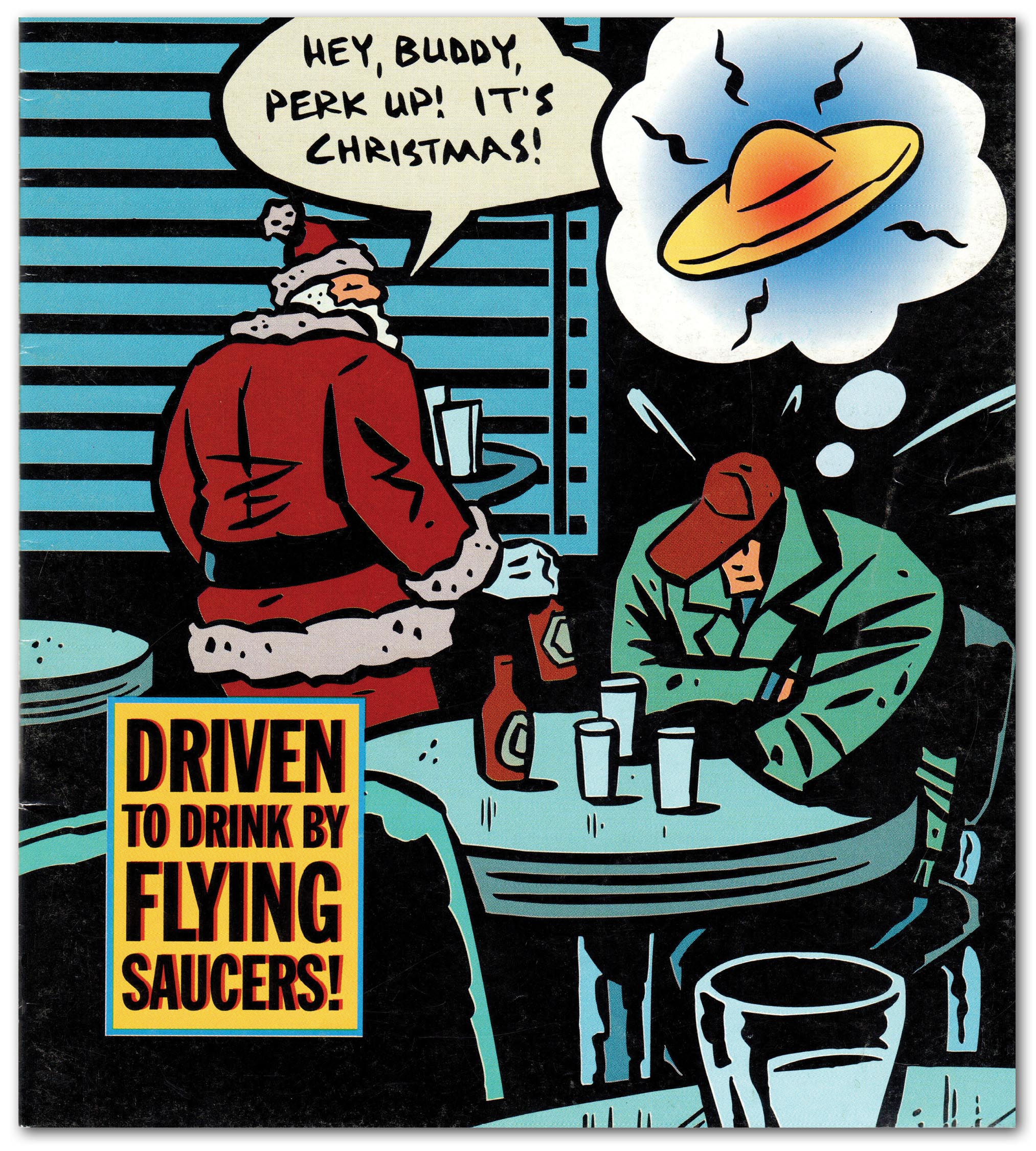 Watch the skies! They ARE coming for you! And look out behind you! You don’t want to end up like old Matt Sinkage here—nursing a bunch of beers in a lonely Ontario bar…

Happy Holidays! Merry Christmas! And all the best in 2020 from the Gang of Two that bring you The Silent Invasion.

Abductions, the third volume in our series The Silent Invasion will be released this coming May. As we’ve been preparing book three, we’ve actually been harder at work on book four which, when complete, will be our first all-new Silent Invasion story in 20-plus years.

Here’s a sneak peak at the first six pages of book four, showing the evolution of these pages from raw layouts to final art.

Larry and I will get together and regale each other with ideas for a story. In between story ideas, he talks about baseball (the Blue Jays) and I talk about hockey (the Oshawa Generals and Whitby Dunlops). We are clearly not listening to one another. And as with hockey, bench clearing brawls often break out. After the first set of fisticuffs, I go away and roughly lay out the scenes as we think we’ve discussed them. The layouts are drawn with a ball point pen or felt pen in small notebooks.

The layouts then go back to Larry and he says, “this scene is too long,” and I say “we don’t have the space limitation anymore. It doesn’t matter. Let’s keep it.” He then says, “The book will go on forever. We’ll never finish it.” Naturally there is a second set of blows—but no game misconduct yet. Pencils are then completed the old fashioned way—with non-repro blue pencils. Rough scripting is indicated on tracing paper. Scenes have been shortened, others moved or added. Then the pencils are photographed with a crappy phone camera and go back to Larry.

Larry edits the scripting even more and after one final donnybrook, I make more changes to the art. Pages are redrawn and redrawn—and after much gnashing of teeth edited again and again. And then finally lettered and inked. The art is then scanned, cleaned up and grey tones added in Photoshop. And there you have it the final art as it stands now. I expect as we move further along in the story I will go back and make more adjustments to the art.

And you thought this post was going to be about (ice) hockey.

Next time: Remembering the Baltimore Stallions—winners of the Grey Cup in 1995 (and the only American-based team to win the CFL championship).

Watch the skies remember—all U.S. presidents since 1980 have been aliens from space!!! The radio in my fillings told me so.

Abductions! is coming from NBM May.

And to get you all feverish with anticipation, here’s a look at four of the covers from Secret Messages—the long-lost floppy comic—in which Abductions! was first serialized. 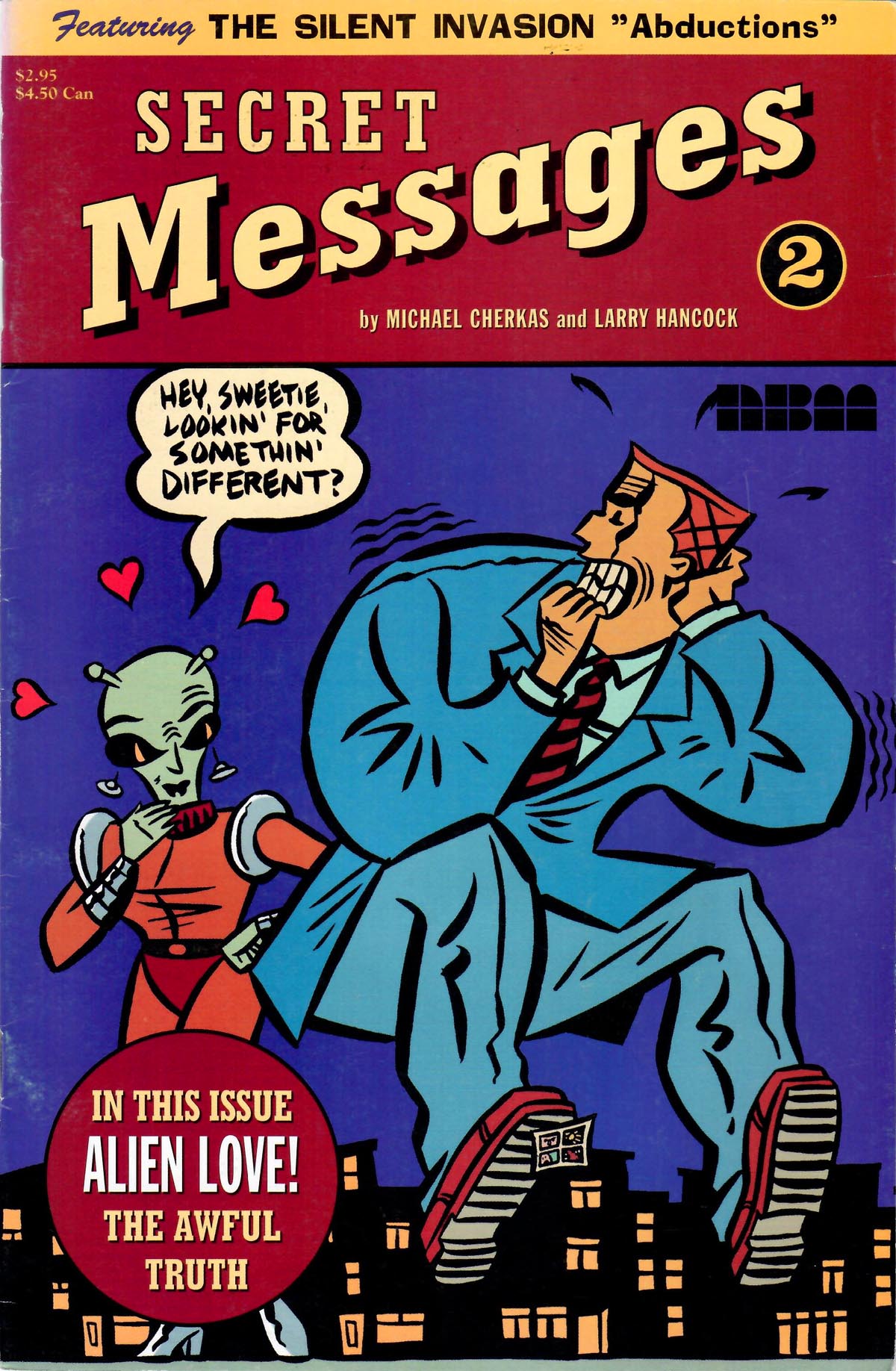 Next week: more lost art… plus answers to the following burning questions about Canadian football: Why are there two 50-yard lines? How can the entire backfield be in motion without confusing both the offensive and defensive teams? And why are the end zones so big?

Keep watching the skies, even though it’s already too late! The aliens are here and stealing your precious bodily fluids!