So I think (I think) my Turkmenistan book is pretty much done. Terry’s read it, mentioned some changes. I’ve made the changes. I still need to put the cover together, the end feels close. I think Terry and I have settled on a title of The Golden Age: Two Years in Turkmenistan. And along with the work on the book coming to an end my time in Vermont is also ending. I’ll be moving back to Boston (Cambridge, Somerville) in the beginning of May. Last weekend I was down looking at apartments and it’s the same plan for this weekend.

And then once I get settled there I guess I’ll start on the next book. I’m weighing two ideas… a reality based book about travelling back and forth across America or a post-apocalyptic romp (something like Beach Blanket Bingo plus Mad Max divided by Candide).

Looking back, this may be a little bit of an exaggeration. I did have some ideas of the kind of story I wanted to tell. I’d seen Turkmenistan mentioned in a number of books and I’d seen a number of news articles about the country, but because most Westerners can only get a two week visa to travel in Turkmenistan there were definite limits on what kinds of stories the authors could tell. I wanted to tell a story that could only be told by a person who had lived in the country. That was my starting point and everything else flowed from that.

And here is a detail of the inks for my cover.

I’m planning on flat colors, maybe only five or six. All the black lines will probably be a dark green, but I’m not sure yet. It’ll take shape as I start working on it. For the title I’m thinking of having it in a bar of color across the top of the book (it would be something like the cover of one of those old Blue Note jazz albums)(only with a broader band for the title). And Terry is probably going to hate this but after reading the book one of my friends was so adamant that it should be called The Golden Age that he sent me a list of reasons justifying it. I was convinced. So Terry and I will be talking about that again.

Since NBM started this blog I’ve been a little confused about what to post. I’ve been posting finished pages, but that kind of seems a little pointless because you’ll see the finished pages when the book comes out. I love the pencils that Rick Geary posts, but my pencils don’t look anywhere near that good. They don’t look like much of anything. And notes and scripts, well, I can’t really imagine they’re too exciting on their own.

And I’d love some feedback, so let me know what you think. Also if you’re curious about any part of the drawing process and would like to see a strip about it let me know. And it doesn’t have to be just about this Turkmenistan book, it can be about anything really.

And I’ll be posting these comics about drawing on my blog as well: jesselonergan.blogspot.com

Sadly, my girlfriend is on another continent so I’m going watch the romantic comedy Friday the 13th.

And here are the last two pages of the of the chapter from my book about Turkmenistan that I’ve been posting on this blog. 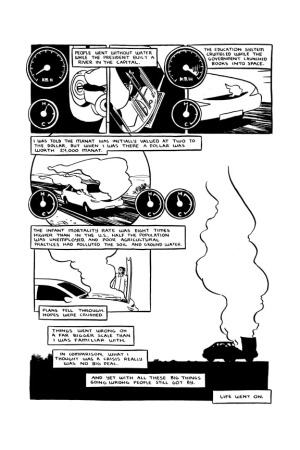 I really don’t have much to say today. I’m in the middle of the last big chapter of my book about Turkmenistan and it’s going well. The super bowl is tonight and I have some cooking to do. So… here’s another page from the first chapter set in Turkmenistan. Adios.

Here’s another page from one of the opening chapters of my book loosely based on my experiences in  Turkmenistan (the presently untitled book loosely based on my experiences in Turkmenistan as I mentioned in my last post). The story focuses on the friendship between an American named Joe and a Turkmen named Azat and builds to Azat’s wedding.  The plot is completely fictional, but a number of the incidents in the book actually happened. Including the one on this page where the taxi driver decided to pop the top on a hot radiator and it exploded in his face. Taxis were the quickest way to get from place to place even long distances (this trip was about 900 km). There were buses, but they were slow and always packed. For the most part the taxi drivers knew what they were doing, but this guy had no clue. 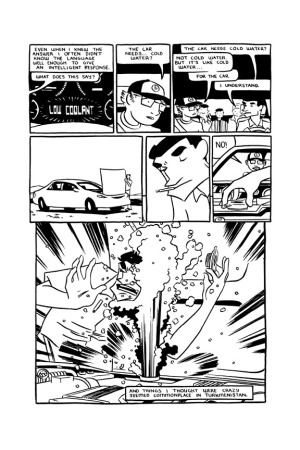 Here’s another page from my book about Turkmenistan. At the moment Terry and I are discussing the title of the book. In my head I’ve been calling it The Golden Age, which comes from the former totalitarian leader of Turkmenistan Saparmyrat Niyazov a.k.a Turkmenbashy (which roughly translates to “the grandfather of all Turkmen”). He declared that the 21st Century would be the Golden Age for the Turkmen people. All the propaganda showed Turkmen living in an wonderful utopia, but the reality was far from that.

So I like The Golden Age as an ironic title. But then again, for someone who has never heard of Turkmenistan or Turkmenbashy, it’s a bit uninformative (and this being a comic they might be thinking it’s something about the early days of Superman).

The book is about Azat who believes in dreaming big, getting rich, and marrying the prettiest girl in town, but sadly he lives in a totalitarian state where dreams have a habit of not coming true. It’s told through the eyes of an American Peace Corps volunteer named Joe.

So the name still isn’t settled, but the book is coming along nicely. I’ve got a big final wedding chapter and a little epilogue piece and then some editing and redrawing to do. I’m shooting to be done in March.