I have been a bit silent on this blog lately, and it’s because I didn’t know what to write. There’s enough going on, but that’s exactly the problem.

We flew back from New York end of October, after a successful launch of Religion: a Discovery in Comics. We had fun at SPX and the Brooklyn Book Festival, and the first positive reviews are emerging, such as these by readers on Goodreads:

“Religion is not my cup of tea and never was, but I liked this book. (…) Now I’ve got a book to advise to those who are not sure about “what’s that religion thing anyway”, what to think about it and why it is important at all.” – Ekaterina

“A lively, intelligent, and witty survey of the world’s major religions from the Dutch comics artist. De Heer can be critical but is always respectful. Entertaining, informative, and provocative.” – Edward

And then, just after we started to get over our jetlag, our new Dutch book came out, Wereldheerschappij in Beeld, about World Domination. We had a lovely, well-attended presentation in bookstore Scheltema and I gave the first copy to Gean Ockels, who said some very touching things about it. 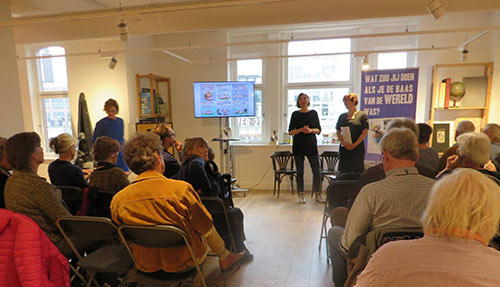 This is her favorite picture from the book – her father in space:

A few interviews with me about this book are on the way (in Dutch) and it had a few very good reviews already.

On 12 November there will be a special Amsterdam presentation of Religion: a Discovery in Comics, at the American Book Center, organized by graphic journalism site Drawing The Times. This event is free to attend and will be taped, so I hope to be able to post it here later. Also, I will draw on the windows of the American Book Center somewhere next week.

So I’m really between books: definitely in my mind but also quite literally in my house, with stacks of books to sign and post.

And then there’s a third book on my mind: the next one! After all the promotion has died down, it’s time to retreat and start thinking and drawing about Love. The Dutch publication of Liefde in Beeld is planned for Spring 2017.

See why I don’t know what to write about…?

Last week, Dutch astronaut and innovator Wubbo Ockels died at the age of 68. This came as a shock to everyone of my generation who sat glued to the TV screen as a child in 1985, when he went into space. The day after I heard the news, I made this comic:

These pages will be part of the new book I’m working on, World Domination: a Discovery in Comics.